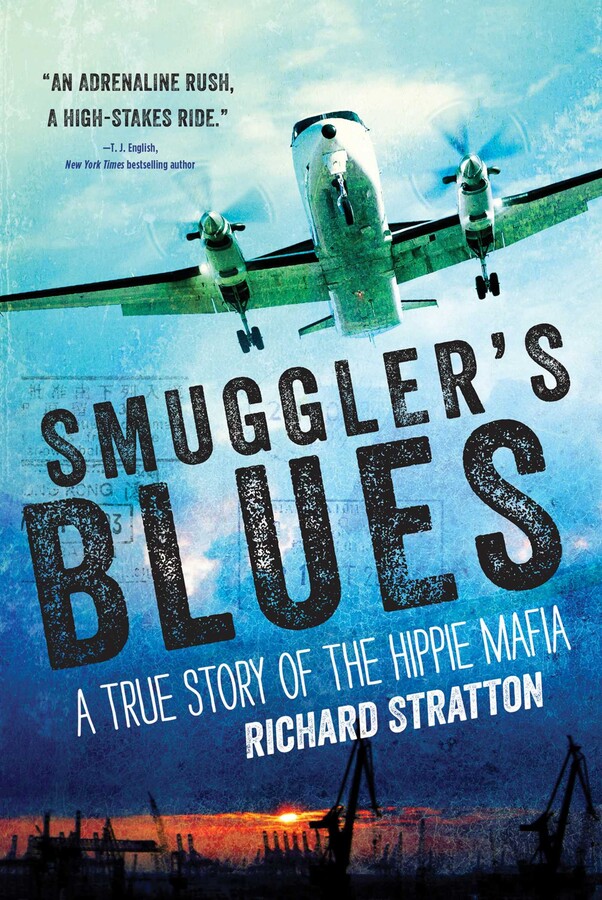 A True Story of the Hippie Mafia ((Cannabis Americana: Remembrance of the War on Plants, Book 1)

Book #1 of Cannabis Americana: Remembrance of the W
By Richard Stratton
LIST PRICE $24.99
PRICE MAY VARY BY RETAILER

Goodfellas meets Savages meets Catch Me If You Can in this true tale of high-stakes smuggling from pot’s outlaw years.

Richard Stratton was the unlikeliest of kingpins. A clean-cut Wellesley boy who entered outlaw culture on a trip to Mexico, he saw his search for a joint morph into a thrill-filled dope run smuggling two kilos across the border in his car door. He became a member of the Hippie Mafia, traveling the world to keep America high, living the underground life while embracing the hippie credo, rejecting hard drugs in favor of marijuana and hashish. With cameos by Whitey Bulger and Norman Mailer, Smuggler’s Blues tells Stratton’s adventure while centering on his last years as he travels from New York to Lebanon’s Bekaa Valley to source and smuggle high-grade hash in the midst of civil war, from the Caribbean to the backwoods of Maine, and from the Chelsea Hotel to the Plaza as his fortunes rise and fall. All the while he is being pursued by his nemesis, a philosophical DEA agent who respects him for his good business practices.

A true-crime story that reads like fiction, Smuggler’s Blues is a psychedelic road trip through international drug smuggling, the hippie underground, and the war on weed. As Big Marijuana emerges, it brings to vivid life an important chapter in pot’s cultural history.

Richard Stratton is also the author of the cult classic novel Smack Goddess and an award-winning journalist and filmmaker. He was a writer and consultant for HBO’s Oz and the creator, writer, and executive producer of Showtime’s Street Time. He is a court-certified expert on prison culture, prison violence, and international drug trafficking. As a journalist, he won a New York Press Club award for his magazine article “Godfather and Son.” He was the founder of the magazine Prison Life and an editor and publisher of High Times. He lives with his wife and children in New York City.

“Many of the tales of his real-life adventures in search of a massive high and the ultimate payday are absorbing in the same zany way as his fiction . . . [f]eaturing encounters with the late David Bowie and Norman Mailer, plus Mick Jagger and convicted murderer and mob boss Whitey Bulger.” —Publishers Weekly

“A wild, entertaining ride . . . A compulsively interesting story with the requisite drama and suspense that will keep the pages turning. . . . Stratton and his crew pulled off a surprising number of impressive smuggles while Wolfshein tried to pin them down, and Stratton throws in a lot of extra color by way of lavish spending, sex, and glittering parties that make heads spin. Near misses abound and offer great fun for readers.” —Kirkus Reviews

"Smuggler's Blues is an adrenaline rush, a high-stakes ride from Maine to Lebanon to the Caribbean. . . . This book will get under your skin, enter your blood stream, and mess with your head.” —T. J. English, New York Times, best-selling author The Savage City and Havana Nocturne

"There is no one who both knows the deadly world of international drug trafficking and who can tell the tale in such a stylishly compelling way, than Richard Stratton, a man who walked the walk and lived to tell about it." —Michael Levine, former undercover DEA agent and author of the New York Times bestsellers Deep Cover and The Big White Lie

"No wonder Norman Mailer liked hanging out with Richard Stratton. His drug-fueled early years read like the stuff of great fiction. Crazed drug cowboys, daredevil pilots, Lebanese hashish lords, a DEA nemesis who's half Javert, half Columbo . . . plus, cameo appearances by Jagger, Bowie, and Whitey Bulger. Smuggler's Blues is not only a mad romp, it's a brilliant indictment of the flaming absurdity of America's war on drugs." —David Talbot, founder of Salon and author of The Devil's Chessboard: Allen Dulles, the CIA and the Rise of America's Secret Government

“Beneath the story of drug smuggling and risk . . . Stratton offers a blistering indictment of the Drug War and a call for Americans to be actively engaged in the political process.” —The Stoner’s Cookbook

"Smuggler’s Blues is a must-read for those enticed by nonstop adventure and outlaw books. It’s definitely one for the handy bookshelf.” —Provincetown Banner

"In 1982, Richard Stratton, one of the last great hippie marijuana smugglers, was hit with a long stretch of hard time all because he wouldn’t give the feds his buddy, Norman Mailer. Yes, that Norman Mailer, the literary lion with the roaring ego. Sure, the Drug Enforcement Administration had Stratton dead to rights on the crime. In his new book, Smuggler’s Blues, he details exactly how he managed to get a ton and a half of Lebanese hash through customs in New Jersey in a $15 million deal." —New York Daily News

On Richard Stratton:
"Richard Stratton, the former editor of High Times magazine, knows a thing or two about marijuana. Not only has he written in depth about the subject, he also spent years as a drug smuggler, moving millions of dollars of the product-a path that ultimately landed him a 25-year sentence, of which he served eight. Since his release two decades ago, Stratton has become one of the most successful and prolific ex-cons, writing novels, producing award-winning films and running a TV series not so loosely based on his life." —City and State

"Not everyone thought Stratton was leading a terrifically exciting life. Before prison, his mother says, 'he was a real asshole.' Stratton, too, wasn’t always contented. 'Sometimes, I’d take walks early in the morning and ask myself, Why am I doing this? I’m going to get caught,' he says. 'Well, okay, I thought. Then I’ll go to prison and write.'" —New York Magazine

A True Story of the Hippie Mafia ((Cannabis Americana: Remembrance of the War on Plants, Book 1)

Book #1 of Cannabis Americana: Remembrance of the W
By Richard Stratton
LIST PRICE $24.99
PRICE MAY VARY BY RETAILER

More books in this series: Cannabis Americana: Remembrance of the W