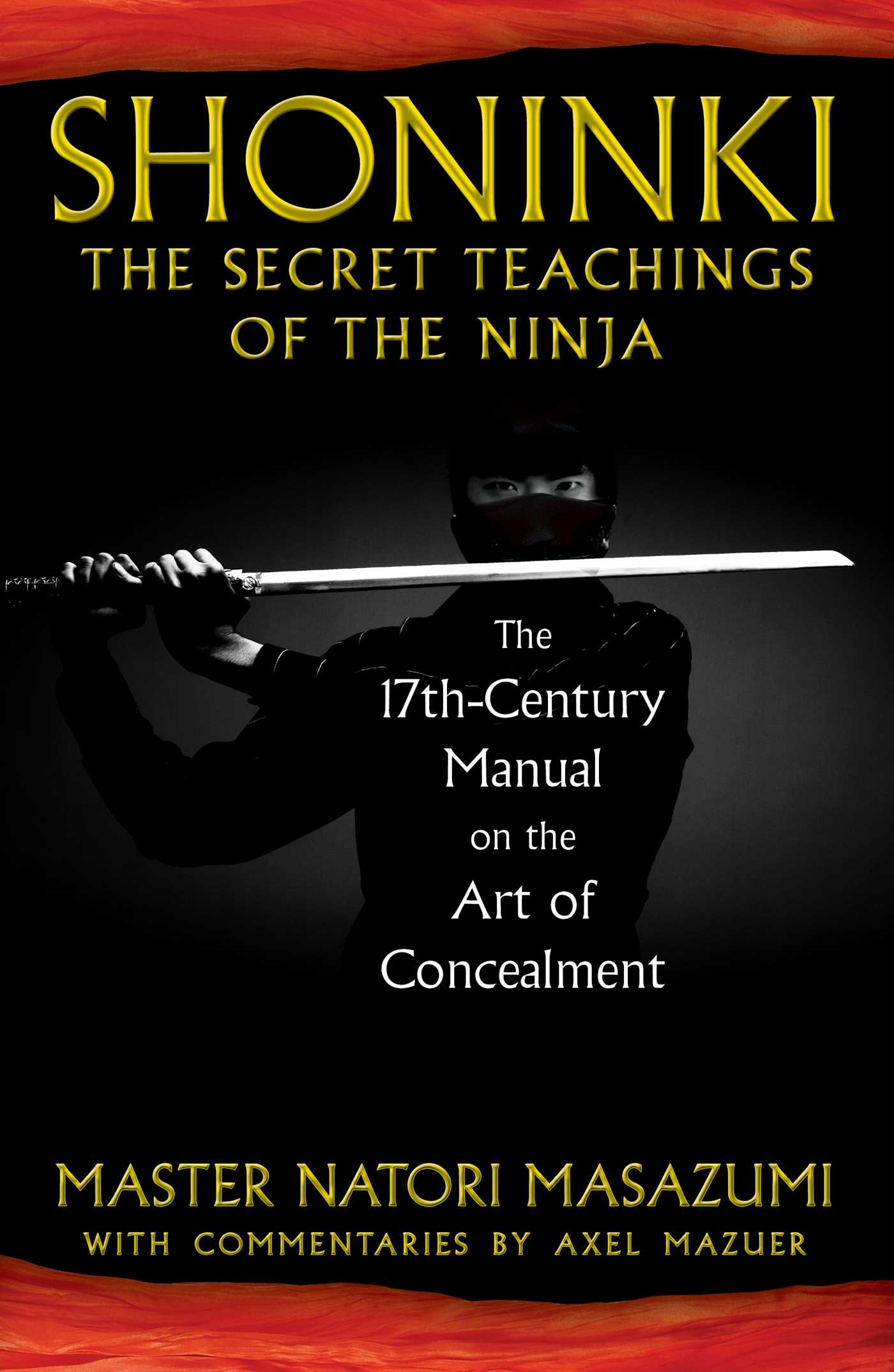 • The path of the ninja as an authentic spiritual discipline

• Details the art of concealment and espionage, including methods of disguise, survival techniques, and face reading

Experts in disguise, infiltration, espionage, and counterintelligence, the ninja had spiritual values and magical traditions that distinguished them from the soldierlike samurai. Their art of ninjutsu, invisible as well as indispensable, was transmitted in secret schools and relied on only a few books, which were written in code.

The Shoninki, one of the most important of these coded manuals, was written in 1681 by Master Ninja Natori Masazumi. Presenting all facets of the art of concealment, espionage, and physical prowess, including methods of disguise and survival techniques, this source text also contains teachings on spiritual meditations, psychic powers, the art of face reading, controlling the emotions, and magic spells. Revealing the connection between the ninja and the yamabushi--warrior monks who were endowed with supernatural powers--this classic text confirms the path of the ninja as an authentic spiritual discipline, one of self-realization and detachment and the way to mind-body harmony.

The Supreme Principles of the Art of Shinobi
(ichiryu no shidai)

The Master says: “The work of a shinobi takes him to the very borders of what an individual can tolerate and it is only by exerting much effort that he is able to support it. These highly skilled individuals have to bear in mind when leaving their homes that they will never see those they love or their children again. Whoever returns home can rejoice for escaping his destiny. The shinobi places his heart beneath the blade of a sword. Similarly, while many people believe that ninjutsu depends on magic, that is not exactly true. Ninjutsu is a practical art and not the imposture of a charlatan.”

This is when the disciple asks: “If one listens to the wind blowing, he hears that the art of the shinobi allows him to travel through inaccessible provinces and to soar over frontiers and customs posts that cannot be crossed. He hears that fathers and brothers are no longer able to recognize their own relatives who have become shinobi. Couldn’t the use of this art--such as when a man, for example, is convinced that someone is standing right in front of him, then suddenly feels the presence of someone at his back, only to turn and see that what he sensed has vanished--be compared to a mysterious rarity, linked to no other tradition? Isn’t this the art of practicing complete self-effacement when approaching people to glean information from them?”

The Master answers: “If a person follows a crude principle or an art of little refinement, then that person shall surely make mistakes. But the correct path is marvelous. There are times when a shinobi recognizes reality with his heart, wraps it in a cloak of illusion (or nonreality) and presents it as reality. An experienced shinobi will recognize when an adversary is using the same principle and recognize the reality of the illusion.

The Teachings of Wolves and Foxes
(koro no michi no narai)

Foxes and wolves are very cunning animals: it is said that the fox can deceive man and that the wolf can read his very soul. They travel indirect routes and can solve the most difficult problems in an incredible manner. Although the techniques based on their example are extremely rare, it is absolutely useful to study them.

When traveling along the official roads in enemy territory, you run the risk of stumbling into a checkpoint. So under no circumstances should a shinobi ever take these roads. Instead, use the technique employed by wolves and foxes, and stay away from the main roads; take the secondary routes. You should use the routes used by the native inhabitants, which are located a distance of at least two or three ri* from the checkpoints. You need to find a good pretext for using these roads. Depending on the situation and the desired objective, it may be necessary to disguise yourself as a priest, a mountain monk, or a merchant.

In principle it is preferable for a shinobi to travel alone. First of all, he can then go wherever he wishes. If he is disguised as an itinerant monk, he can also be accompanied by two or three other shinobi. One of them should be an expert in languages (dakko no shinobi), capable of speaking the different dialects of sixty regions as well as capable of taking note of the important areas and places visited.

The person who acts out of duress has lost the favor of heaven. The techniques of these kinds of experts are not handed down to their descendants. As quickly as pigeon eggs are speedily discovered, they become victims.

You should keep this in mind and ponder on it.

*A ri is an old Japanese unit of measurement equivalent to 2.468 miles. Two or three ri would therefore be the equivalent of around 5 to 7.5 miles.

The Teachings of Oxen and Horses
(gyuba no tsutae no koto)

This strategy is the opposite of that of wolves and foxes because cattle and horses move about openly among men. If a general wishes to send messengers into enemy territory, he chooses shinobi who can pass as members of the common people and thus can reach the intended territory.

Another possibility lies in the fact that a shinobi can meet a messenger from the targeted province at a set time, and then have that individual accompany him into enemy territory. This corresponds exactly to the way cows and horses are led by their masters, and this is the reason the strategy was given this name.

To devote yourself to gathering information, it is sometimes necessary, depending on the circumstances, to reside in the land of the adversary. The shinobi will be given complete latitude for thinking up a good reason for this: he can form bonds of friendship with people, pretend to be ill, marry a woman, speak ill of his own land and even laud the enemy country, and thereby pass for a traitor to his own country.
Master Natori Masazumi

Master Ninja Natori Masazumi directed the Kishu School of one of the most important ninja clans of the Edo period in Japan (1603-1868).