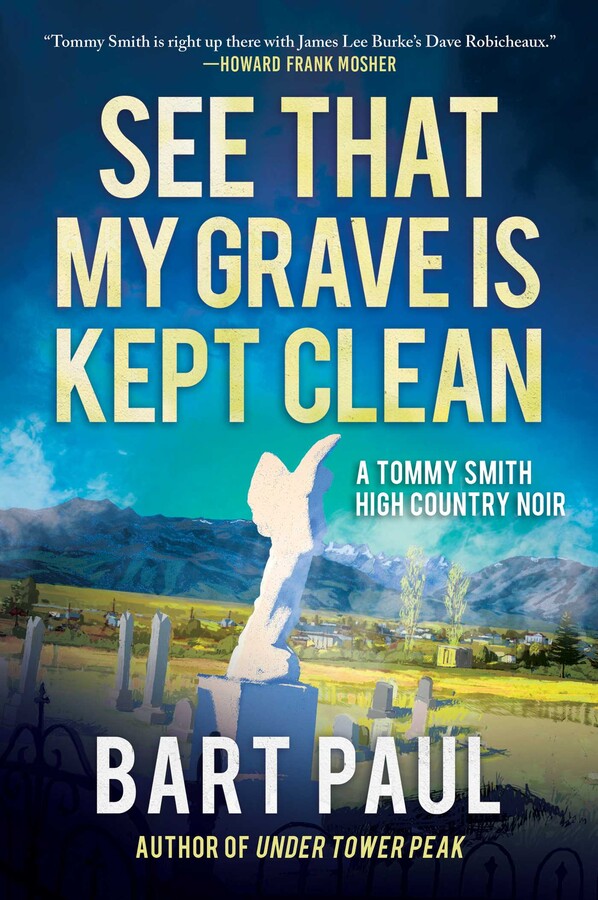 "Mr. Paul, a veteran rancher as well as an author, writes fine action scenes, and his descriptions of nature and animals can seem just as thrilling." —Tom Nolan, Wall Street Journal

For readers of Craig Johnson and C. J. Box, a taut, fast-moving contemporary thriller that builds to an explosive, action-filled conclusion.

The third book in the acclaimed western thriller series that debuted with Under Tower Peak—named one of the Ten Best Mysteries of the Year by the Wall Street Journal—See That My Grave Is Kept Clean once again features Iraq War sniper and Eastern Sierra packer Tommy Smith. With his new wife, Deputy Sheriff Sarah Cathcart, and their baby daughter, he is building a home and a new life as he opens his own pack outfit in the high country of his youth.

When a young girl is reported lost in the canyon above their home, Tommy leads the search, but instead of the missing child, he discovers a corpse that may hold the key to a long-unsolved local bank theft and a fortune in stolen cash. The FBI is called in. Though Tommy tries not to get involved, the promise of easy money has lured unsavory characters from the hard streets of Reno, and speculation about the missing cash is undermining the social fabric of their little town.
Facing threats to his family and the way of life he is fighting to preserve, Tommy must call on all his skills to uncover the connection between the missing girl and the long-dead body—a link that will inevitably lead to an explosive showdown deep in the Sierra wilderness.

Bart Paul is the author of TV documentaries, short stories, the biography Double-Edged Sword: The Many Lives of Hemingway’s Friend, the American Matador Sidney Franklin, and the novels in his Tommy Smith High Country Noir series, including Under Tower Peak, Cheatgrass, and See That My Grave Is Kept Clean..Throughout his school years, he spent summers working on cattle ranches and pack outfits in California’s Eastern Sierra. After living in Southern California for many years, he now divides his time between Bridgeport, California, near Yosemite, and Smith Valley, Nevada—the ranching country of his novels.

Praise for See That My Grave Is Kept Clean:
"Mr. Paul, a veteran rancher as well as an author, writes fine action scenes, and his descriptions of nature and animals can seem just as thrilling."—Tom Nolan, Wall Street Journal

"In clean, spare prose, Paul spins a plot of understated but still startling violence, as Smith does what he must to protect his family and stay alive himself. The third entry in the Tommy Smith series is a fine western thriller with a tender heart."—Booklist

"Exciting . . . Tommy is slow to anger but quick to defend those in need, as he does—with gusto—in the explosive finale. . . . Readers will welcome Paul’s comfortable world, with its loving relationship between Tommy and his wife, appealing animals, and true friends."—Publishers Weekly

"Readers will be transported by Paul’s easygoing prose as he lingers almost philosophically on the sparse but majestic landscape and the people who choose to make their living there. Sharing qualities with authors like Paul Doiron and C.J. Box, Paul delivers a Western-themed thriller that can easily be read as a stand-alone featuring characters as quiet and as deep as the mountains themselves."—Library Journal

"Fans of James Lee Burke and Craig Johnson should take note of this third installment of the Tommy Smith High Country Noir series. . . . Paul packs the plot with many threads that weave together nicely. . . .For [a] mix of mystery and high mountain adventure, Bart Paul has a winning series that’s worth saddling up and taking the ride."—Criminal Element

"Bart Paul delivers a barrelhouse of a story, a tight and lyrical tale of malfeasance and evil, splashed vividly against a stunning Sierras backdrop. A terrific book."—Brad Smith, Spur Award–winning author of The Return of Kid Cooper

“Atmospheric, gripping, and lean, See That My Grave Is Kept Clean is proof—Bart Paul has it all..”—Jeff Johnson, author of The Darby Holland Crime Series and Deadbomb Bingo Ray

Praise for Under Tower Peak:
Named One of the 10 Best Mysteries of 2013 by the Wall Street Journal
“A scenic, suspenseful debut novel turns out to be one of the best of the season. . . . Bart Paul’s debut novel displays some formidable influences—Hemingway, for instance . . . Shadows of Cormac McCarthy and Jim Harrison also flutter across the pages of this swift-moving tale. . . . The nonstop action in Under Tower Peak is well-paced, the plot twists surprising (even shocking), and the occasional humor welcome. . . . A must-read.” —Wall Street Journal

“Under Tower Peak has everything I look for in a thriller—big characters, big action, sharp dialogue, and the magic of place. Bart Paul brings the California mountains to life through Iraqi war sniper Tommy Smith, a tough soul who would like to forget that war and get on with his life in the great outdoors. This book is engaging as a firefight and haunting as a campfire story.” —T. Jefferson Parker, author of The Famous and the Dead and The Jaguar

“A superb contemporary western thriller. Paul's Tommy Smith is right up there with James Lee Burke's Dave Robichaux. . . . Bart Paul knows his High Sierra country inside out. Under Tower Peak is a beautifully-written, searingly honest literary thriller by a first-rate storyteller and outdoorsman.”—Howard Frank Mosher, author of Walking to Gatlinburg

“A great Western thriller. Bart Paul knows how to keep things interesting, and his attention to detail is pitch-perfect—from how to pack a horse to the relationship between two modern-day cowboys. In Tommy Smith, he has created a Western hero that is part John Wayne and part James Bond. Under Tower Peak is a hard book to put down.” —Dan O’Brien, author of Stolen Horses and Buffalo for the Broken Heart

“Paul writes with spare, clean, hard-driving prose that skates along morality's knife-edge—writing reminiscent of Cormac McCarthy and James Lee Burke—all the while layered with lush, keenly observed descriptions of the natural world and man’s place in it. Wild-country noir with gripping, compelling action.” —Kirkus Reviews

“A superior blend of thriller and contemporary western, full of gun lore and with a fine appreciation of the Sierra Nevada wilderness. And Paul’s spare, reflective style recalls Hemingway.” —Booklist, starred review

“A Tarantino-like thriller that’s hard to put down.” —Booklist

“Bart Paul writes about California's northern ranch lands the way James Lee Burke writes about the Louisiana bayou country. Cheatgrass is a fast-paced, character-driven literary thriller that will leave you longing to read more novels featuring Sergeant Tommy Smith. Cheatgrass should be a strong contender for both the Edgar and Golden Spur awards.” —Howard Frank Mosher, author of God’s Kingdom and Walking to Gatlinburg

"A fast-moving thriller with a lot of tension . . . The descriptions of the landscape are wonderful.” —Daily American

"Fast-paced, this plot will leave you begging for the next novel to be released. . . . Using this gorgeous setting allows the reader to truly feel as if they’re right there." —Suspense Magazine