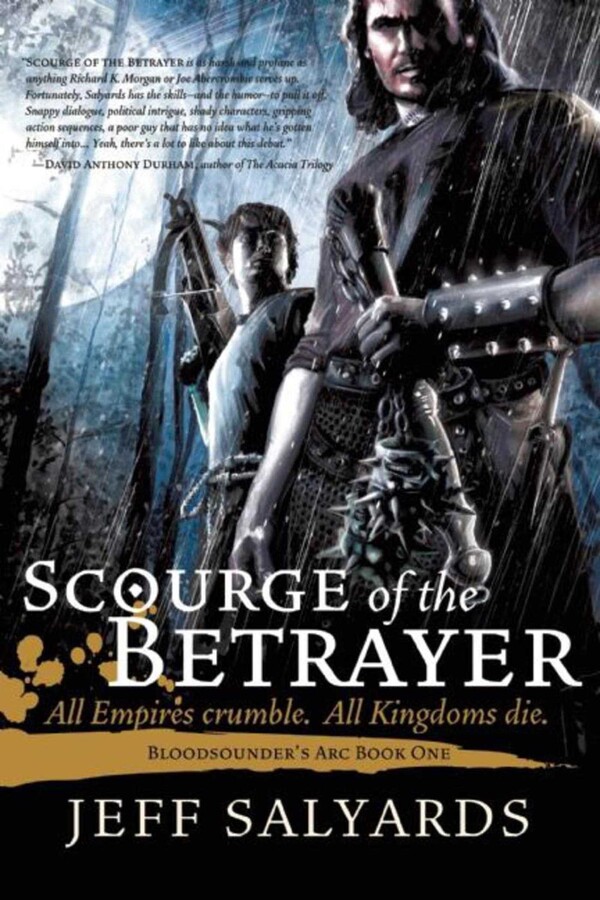 Scourge of the Betrayer

Many tales are told of the Syldoon Empire and its fearsome soldiers, who are known throughout the world for their treachery and atrocities. Some say that the Syldoon eat virgins and babies  or perhaps their own mothers. Arkamondos, a bookish young scribe, suspects that the Syldoon’s dire reputation
may have grown in the retelling, but he’s about to find out for himself. Hired to chronicle the exploits of a band of rugged Syldoon warriors, Arki finds himself both frightened and fascinated by the men's enigmatic leader, Captain Braylar Killcoin. A secretive, mercurial figure haunted by the memories of those he’s killed with his deadly flail, Braylar has already disposed of at least one impertinent scribe and Arki might be next.

Archiving the mundane doings of millers and merchants was tedious, but at least it was safe. As Arki heads off on a mysterious mission into parts unknown, in the company of the coarse, bloody-minded Syldoon,he is promised a chance to finally record an historic adventure well worth the telling, but first he must survive the experience! A gripping military fantasy in the tradition of Glen Cook, Scourge of the Betrayer explores the brutal politics of Empireand the searing impact of violence and dark magic on a man’s soul.

"Scourge of the Betrayer is as harsh and profane as anything Richard K. Morgan or Joe Abercrombie serves up. Fortunately, Saylards has the skills - and the humor - to pull it off. Snappy dialogue, political intrigue, shady characters, gripping action sequences, a poor guy that has no idea what he's gotten himself into... Yeah, there's a lot to like about this debut."
—David Anthony Durham, author of The Acacia Trilogy.

"Scourge of the Betrayer is a fascinatingly lateral take on quest fantasy. The strangely flawed Captain Killcoin and the curiously naive scribe Arkamondos intersect in unusual and interesting ways as they deal with politics, combat, and a peculiar costly form of magic. A gripping read, this is a fine opening to a series I'm looking forward to continuing to enjoy."
—Jay Lake, author of Mainspring and Green

"Gritty, gripping, and layered with surprises."
—Howard A. Jones, author of The Waters of Eternity

"I've long been a great fan of novels that play and experiment with the standards of fantasy, and Scourge of the Betrayer comes as no exception. Salyards not only executes the tropes of the genre skillfully, but he knows just when and how to surprise the reader by veering AWAY from any expectations we might be developing. Readers of traditional fantasy and sword-and-sorcery definitely should give this one a look; I'm impatient for a sequel already, myself."
—Ari Marmell, author of The Conqueror's Shadow and The Goblin Corps

"A tale of terror and bloodshed, set on a fascinating world, told by an interesting narrator. What more could you want?" -- Mike Resnick, Hugo and Nebula award winning author. "[A] fascinatingly lateral take on quest fantasy. A gripping read, this is a fine opening to a series I'm looking forward to continuing to enjoy."
—Jay Lake, author of Mainspring and Green

"[A] fascinatingly lateral take on quest fantasy. A gripping read, this is a fine opening to a series I'm looking forward to continuing to enjoy."
 Jay Lake, author of Mainspring and Green

Scourge of the Betrayer