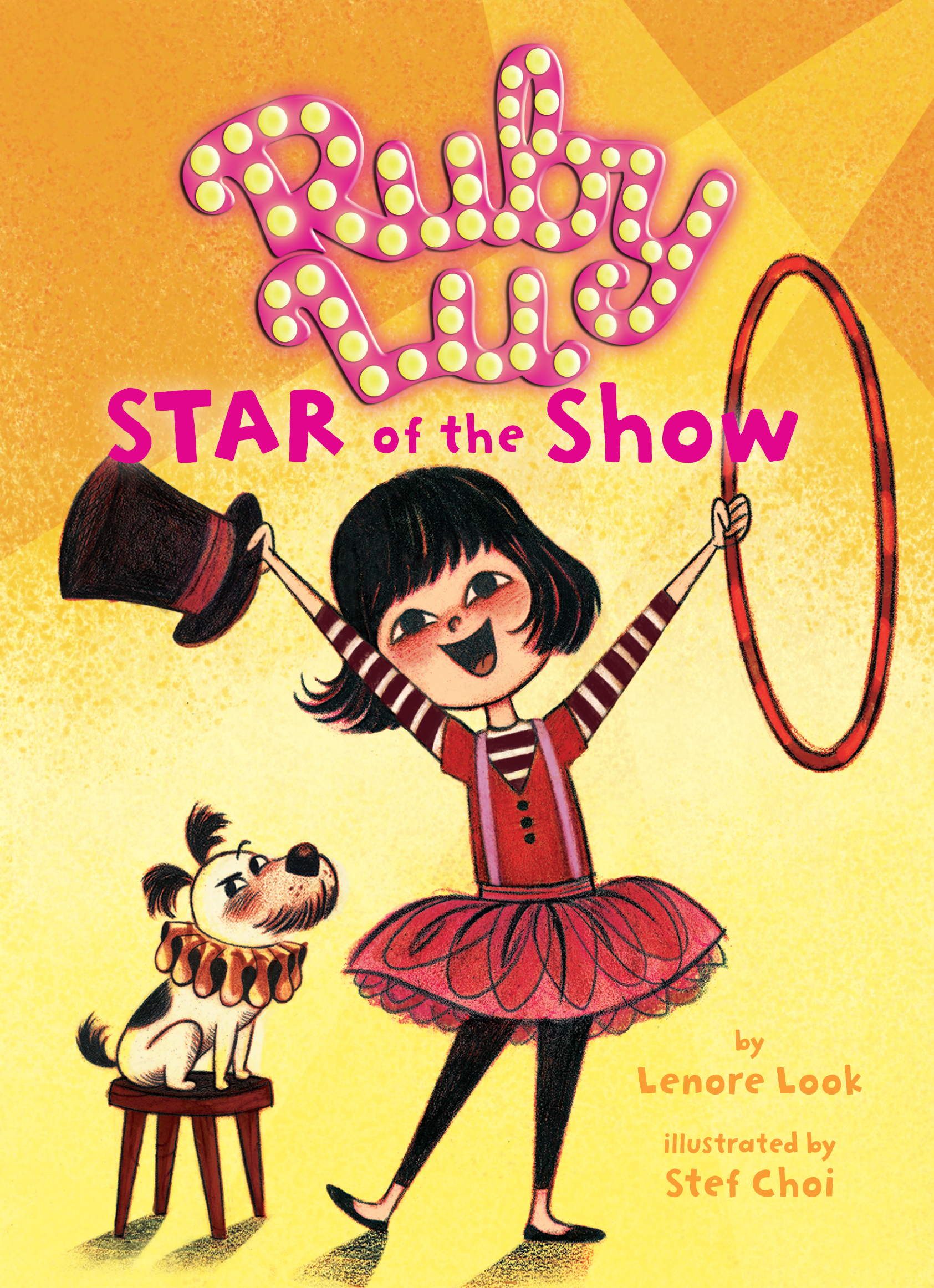 Ruby Lu, Star of the Show

Ruby is starting third grade, and she can't wait! In third grade you get to join clubs, like for knitting and ballroom dancing and yoga. In third grade you get to sign up for a musical instrument (Ruby is convinced that she is destined to play the harp) and play in the orchestra. In third grade you also get to learn cursive...and that's only the beginning! But for Ruby Lu, third grade also means an especially big change: her father loses his job. When her mother goes to work to support the family, Ruby and Oscar have to adjust to her father's bizarre caretaking, which is definitely not all fun and games. And then there's the fact that money is tighter than ever. Ruby is determined to change things, though. Surely there's a way for her to make a million dollars!

As Ruby is about to discover, making money isn't easy...but having a loving family is the most valuable thing of all. This is another funny, charming, heartfelt gem from Lenore Look.

CHAPTER ONE
The Best Thing About Third Grade

The best thing about third grade was absolutely everything.

“Hooray!” exclaimed her cousin Flying Duck in Chinese Sign Language. Both girls wiggled their thumbs, which means “thank you” in CSL.

Ruby’s dad wiggled his thumbs back. Unlike other days when he would rush off to work before anyone else made it downstairs, he was in the kitchen serving his Back-to-School Breakfast Special for the girls. It was a tradition that he had started when Ruby was in kindergarten.

“The key to a good school year is a good breakfast,” said Ruby’s dad, slipping a waffle in front of her.

“And the key to a good meeting with your boss,” added Ruby, giving her dad a wink, and digging right in.

Ruby’s dad winked back. She could tell that he was impressed that she remembered that he had an important meeting with his boss. “Third graders sure know everything!” he said cheerfully.

“And they eat pretty fast too,” said Ruby, gobbling down the last of her waffle.

“Mee too!” said Oscar, stuffing his cheeks. Ruby laughed. He was her baby brother, and he was so silly and hungry all the time.

“Take it easy,” Ruby said to Oscar. “You’re not going to school yet, you’re only going to day care.”

Ruby’s mom, who usually stayed home with Oscar, was out with Flying Duck’s parents, helping them look for work. Flying Duck’s parents, who had recently moved from China, needed to find jobs, and Ruby’s mom, who was good at speaking Cantonese and English, was translating for them. So it was decided that Oscar, who was almost one, would go to day care three mornings a week.

Ruby gave Oscar a kiss on the head. “You’ll have a great time!” she said, leaning carefully away from Oscar’s sticky high chair and even stickier hands.

Flying Duck also gave Oscar a kiss on the head, and Oscar, quick as a Venus flytrap, caught Flying Duck with a whipped-cream hug.

Then Elvis, Ruby’s new dog, jumped up and covered Flying Duck with kisses, licking off the sweet, fluffy cream that Oscar had smeared on her.

“Oh you silly dog,” said Ruby, throwing her arms around Elvis and rubbing her face into his fur. “I’m going to miss you today.”

“Urrrrrr?” said Elvis. He was the best thing that happened to Ruby during the summer. One day he appeared on her doorstep, and by the end of the summer, she had adopted him. And now he was the absolute best thing about third grade. Ruby was looking forward to taking him to dog obedience school for the first time, after school. He was full-grown and had some unusual skills for a dog, such as yoga, riding a bicycle, and balancing plates and balls on his head, but obeying Ruby was not one of them. He had a mind and life of his own. He was always practicing his Down Dog position . . . or his Cobra . . . or his Spider. But he never came when called, or sat or begged or heeled like a normal dog. This was frustrating to Ruby, but she loved him just the same. His best skills, Ruby felt, were the most important ones—giving Ruby a listening ear whenever she needed it, and watching TV with her. He loved TV, especially animal shows, and so did Ruby. Nevertheless, she could hardly wait to train him to do some normal dog tricks.

Elvis looked at Ruby with round wet eyes.

And Ruby looked at Elvis.

“Owwwwwww,” moaned Elvis sadly. He seemed to say that he was going to miss Ruby terribly until she got home.

“Oh, I wish I could bring him to school with me,” she said, squeezing Elvis.

“Okay,” said Ruby, wiping a tear from her eye.

Ruby threw her arms around her dad and gave him a kiss. “Bye, Daddy,” she said. “I love you.”

Then she and Flying Duck hurried out of the house and down 20th Avenue South toward third grade.

Lenore Look is the author of Ruby Lu, Brave and True, an ALA Notable Book; Love As Strong As Ginger, illustrated by Caldecott Honor artist Stephen T. Johnson; and Henry's First-Moon Birthday, illustrated by Yumi Heo. She lives in Randolph, New Jersey.

Stef Choi is a debut children’s book illustrator. She has worked as a character designer and illustrator in animation since 2002 at studios such as Disney, Cartoon Network, Nickelodeon, and LAIKA. She lives in a tree house in Portland, Oregon.

Ruby Lu, Star of the Show