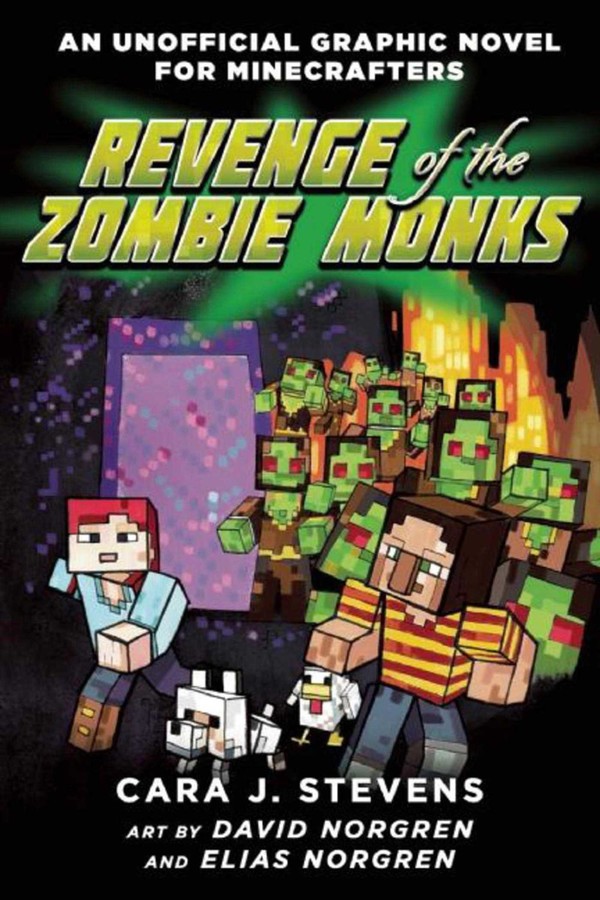 Revenge of the Zombie Monks

An Unofficial Graphic Novel for Minecrafters, #2


Phoenix, Wolfie, and their friends are back in this exciting second part of the Unofficial Graphic Novel for Minecrafters series! Past the walls of their monastery, the monks of Xenos grow enchanted golden apples for their neighbor villagers. As readers learn in Quest for the Golden Apple, these golden apples have magical healing abilities and have the power to keep the villagers save. The monks also have and protect the knowledge that connects Xenos to her sister worlds. This knowledge keeps Xenos and her citizens safe. But when the monks are zombified, Xenos’s citizens need a new hero.

Following the design of zombie comics and Minecraft comics, follow Phoenix and her friends as they fight to save the citizens and monks of Xenos. But Phoenix and her crew of heroes have no idea and do not suspect the culprit behind this disaster—an incredibly powerful foe who will do anything to keep Phoenix from saving her world.

The following three books in this series—Chasing Herobrine, The Ender Eye Prophecy, and Battle for the Dragon’s Temple—continue the adventures of Phoenix and are written by Cara J. Stevens. This book is sure to delight fans of both authors, graphic novels, and Minecraft.

Sky Pony Press, with our Good Books, Racehorse and Arcade imprints, is proud to publish a broad range of books for young readers—picture books for small children, chapter books, books for middle grade readers, and novels for young adults. Our list includes bestsellers for children who love to play Minecraft; stories told with LEGO bricks; books that teach lessons about tolerance, patience, and the environment, and much more. In particular, this adventure series is created especially for readers who love the fight of good vs. evil, magical academies like Hogwarts in the Harry Potter saga, and games like Minecraft, Terraria, and Pokemon GO. While not every title we publish becomes a New York Times bestseller or a national bestseller, we are committed to books on subjects that are sometimes overlooked and to authors whose work might not otherwise find a home.
Cara J. Stevens

Cara J. Stevens has a deep and abiding love for video games, science fiction and writing. She began her career designing interactive games and stories based on books and is happy to come full circle, creating stories based on video games. She has written nine other books for kids, including the novel Dragon School. When she’s not writing or hanging out at the beach, she can be found playing pinball, WiiU, and classic Atari games. Cara lives in Old Greenwich, Connecticut with her husband, two children, and a loud, fluffy dog named Oliver.

"The highly pixilated art reflects the distinctive animation-style of the game and looks almost like screen grabs, which will only endear it more to young readers who love to play Minecraft. The book reads like the first volume of a continuing adventure and will leave kids wanting more."Booklist on Quest for the Golden Apple

Revenge of the Zombie Monks

An Unofficial Graphic Novel for Minecrafters, #2