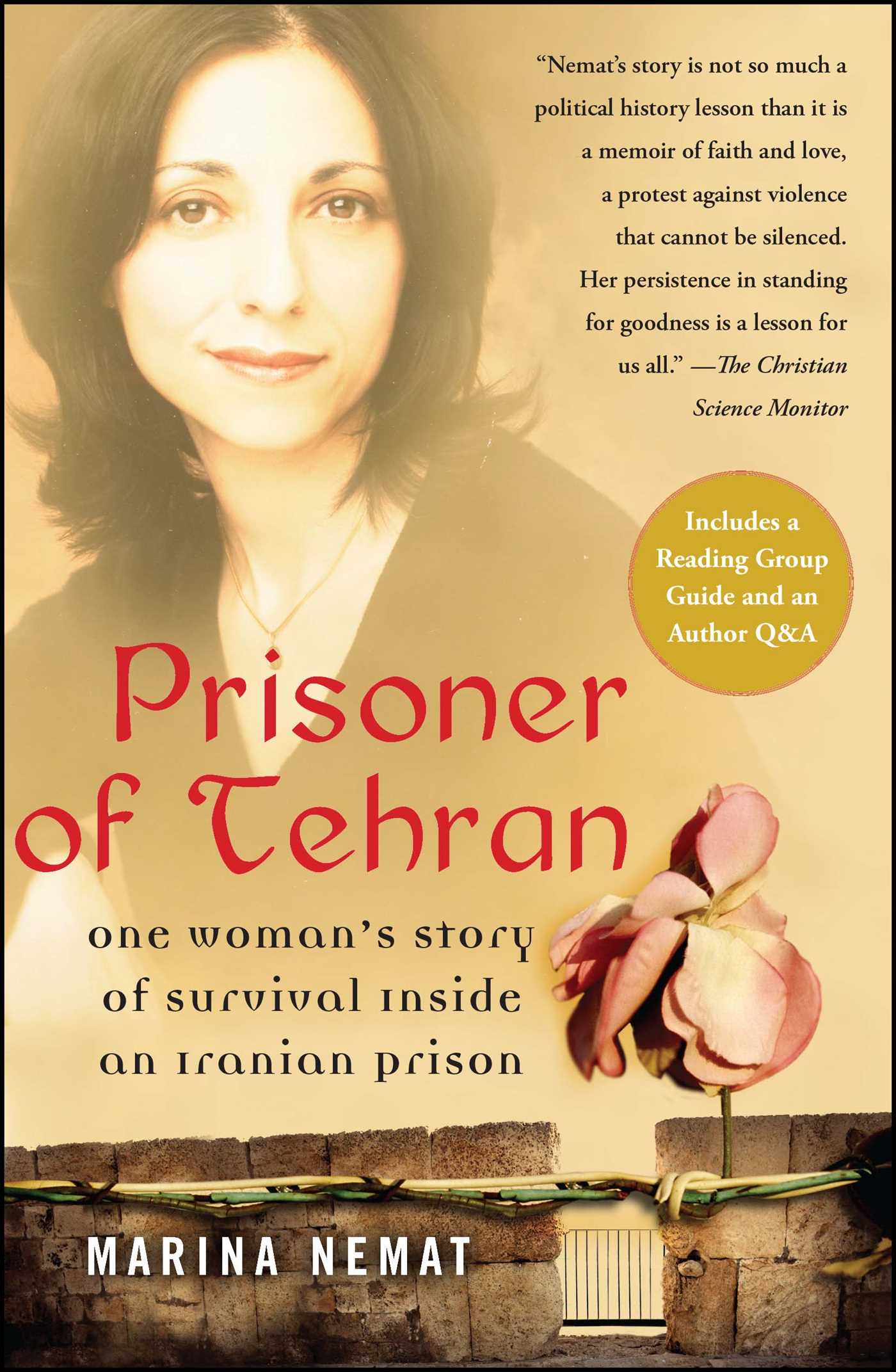 One Woman's Story of Survival Inside an Iranian Prison

By Marina Nemat
LIST PRICE $17.00
PRICE MAY VARY BY RETAILER

In her heartbreaking, triumphant, and elegantly written memoir, Prisoner of Tehran, Marina Nemat tells the heart-pounding story of her life as a young girl in Iran during the early days of Ayatollah Khomeini's brutal Islamic Revolution.

What would you give up to protect your loved ones? Your life?

In her heartbreaking, triumphant, and elegantly written memoir, Prisoner of Tehran, Marina Nemat tells the heart-pounding story of her life as a young girl in Iran during the early days of Ayatollah Khomeini's brutal Islamic Revolution.

In January 1982, Marina Nemat, then just sixteen years old, was arrested, tortured, and sentenced to death for political crimes. Until then, her life in Tehran had centered around school, summer parties at the lake, and her crush on Andre, the young man she had met at church. But when math and history were subordinated to the study of the Koran and political propaganda, Marina protested. Her teacher replied, "If you don't like it, leave." She did, and, to her surprise, other students followed.

Soon she was arrested with hundreds of other youths who had dared to speak out, and they were taken to the notorious Evin prison in Tehran. Two guards interrogated her. One beat her into unconsciousness; the other, Ali, fell in love with her.

Sentenced to death for refusing to give up the names of her friends, she was minutes from being executed when Ali, using his family connections to Ayatollah Khomeini, plucked her from the firing squad and had her sentence reduced to life in prison. But he exacted a shocking price for saving her life -- with a dizzying combination of terror and tenderness, he asked her to marry him and abandon her Christian faith for Islam. If she didn't, he would see to it that her family was harmed. She spent the next two years as a prisoner of the state, and of the man who held her life, and her family's lives, in his hands.

Lyrical, passionate, and suffused throughout with grace and sensitivity, Marina Nemat's memoir is like no other. Her search for emotional redemption envelops her jailers, her husband and his family, and the country of her birth -- each of whom she grants the greatest gift of all: forgiveness.

PRISONER OF TEHRAN Reading Group Guide
DISCUSSION QUESTIONS:
1. Marina's experiences were truly extraordinary. Did this make it difficult for you to relate to her? In what aspects of her life and personality did you connect most with Marina? At what points did you have the most difficult time connecting with her? What surprised you most about Marina?
2. On page 46, after Marina has been locked outside on the balcony as a punishment by her mother, she decides to rebel, saying "I knew that my mother would get angry, but I didn't care; I couldn't bear my solitary confinement any longer." How do you think childhood experiences such as this one affected Marina's reaction to prison? Was she more or less equipped to deal with the conditions and restrictions imposed at Evin as a result of how her mother treated her?
3. On page 85, after Marina discovers that Arash is involved in revolutionary activities, she says, "I tried to believe him. I tried to be brave. After all, I was thirteen years old." How did Marina's age throughout the memoir influence your reading? Is present day Marina successful in conveying the feelings and thoughts of the young Marina? Do you find her voice believable as a teenager?
4. When Ali saves Marina just seconds before her execution she remembers: "His eyes focused on mine, Ali walked toward me. I wanted to run. I wanted Hamehd to shoot me and end my life" (42). Why do you think it was worse for Marina to be rescued by Ali than to die by execution? Does Marina's reaction reflect more broadly on the role of women in Iranian culture?
5. Marina's feelings for Ali are complex and wrenching. On page 231, Ali says, "I wanted you, but I'm not that selfish. If there was a way, I would have let you go, and then I would have probably killed myself with a clean shot in the head." Do you believe him, or do you think his actions were motivated solely by his desire? Ali's mother tells Marina that he is "a good man." Do Marina's feelings for Ali's family change her opinion of him?
6. The memoir begins with Marina landing in Canada with her husband and child; we know from the outset, therefore, that her marriage to Ali has ended and that she has remarried. How did this knowledge affect your view of Marina and Ali's relationship? If Marina's marriage to Ali had truly been a "life sentence," would you view it differently?
7. The imagery of the "washable" nature of the written word occurs throughout the book, such as when Marina sees Sarah's body covered in tiny words: "And she washed the words off her skin. The Book of Sarah. Alive, breathing, feeling, hurting, remembering" (page 119). Later, when Marina returns from Evin, she learns that her mother has destroyed her books and her grandmother's life story: "Washed books. The written word drowned, silenced" (page 259). Why is it significant that washing words destroys rather than cleanses them? How does this imagery of "washed words" apply to Marina's story?
8. On page 237, Marina and Ali have an argument about the execution of political prisoners. Ali supports the idea of self-defense, while Marina responds, "I will not kill another human being." With whom do you agree? Why do you think that Marina's and Ali's parallel experiences as political prisoners resulted in opposite viewpoints? Do you think that gender plays a role in their reactions?
9. When Marina and Andre decide to illegally marry, he says to her, "I know that marrying you is dangerous. But I want to do it. We can't give in. We're not doing anything wrong" (page 264). Do you think their decision to marry illegally is brave or foolish? Is it significant that these words come from Andre, who had not been imprisoned, rather than Marina?
10. When Marina returns after two years in Evin, she "felt like a stranger" at home; she wonders if the lack of questions about her experience is "their way of protecting me or protecting themselves." This conversation echoes the one between Marina and her husband at the beginning of the memoir, when he apologizes for "not asking" about her experience. Are Marina's parents and Andre protecting her, themselves, or both? Do you think Marina would still have shared her story with the world if she had originally been able to speak about it with those closest to her? Why?
Enhance Your Book Club:
1. At the moment she finds out about Sarah and Sirus' arrest, Marina is reading a book of poems by Forugh Farrokhzad. Farrokhzad is a famous Iranian poet who lived from 1935-1967; as a divorced and therefore ostracized woman, she took a rebellious and courageous stance against the plight of women in Iran in the mid-1950s. Before the meeting, ask each member of the book club to read her poems (they can be found online at www.forughfarrokhzad.org) and write down a few favorite lines. Bring the verses to the meeting and read them aloud to enrich your conversation about Marina's experience.
2. To add a sense of Marina's culture to the book club meeting, serve rice cookies like the ones Marina ate with her grandmother on their Sunday walks to church. You can order cookies online at http://www.semiramispastries.com/homepage.html, or bake them yourself using the recipe found at http://www.cyber-kitchen.com/rfcj/COOKIESandPASTRIES/Persian_Rice_Cookies_- _dairy.html. Serve Earl Grey tea with the cookies to add to the experience.
3. To learn more about the conditions that Marina faced as a political prisoner in Evin prison, have one or two volunteers from the group come to the meeting prepared with research about Evin. (A good start can be made at http://www.iranian.ws/iran_news/publish/article_12077.shtml 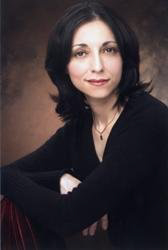 Marina Nemat grew up in Tehran, Iran. In 1991, she emigrated to Toronto, Ontario, where she now lives with her husband, Andre, and their two sons.

"Like a harrowing Thousand and One Arabian Nights, Prisoner of Tehran is the story of Marina Nemat -- her unvarnished courage, her intrepid wisdom, her fight to save her integrity and her family in a world in which to be female is to be chattel. Written with the deft hands of a novelist, it is the portrait of a world only too real, where women's lives are cheap -- but not this one." -- Jacquelyn Mitchard, author of The Deep End of the Ocean and Cage of Stars

One Woman's Story of Survival Inside an Iranian Prison

By Marina Nemat
LIST PRICE $17.00
PRICE MAY VARY BY RETAILER