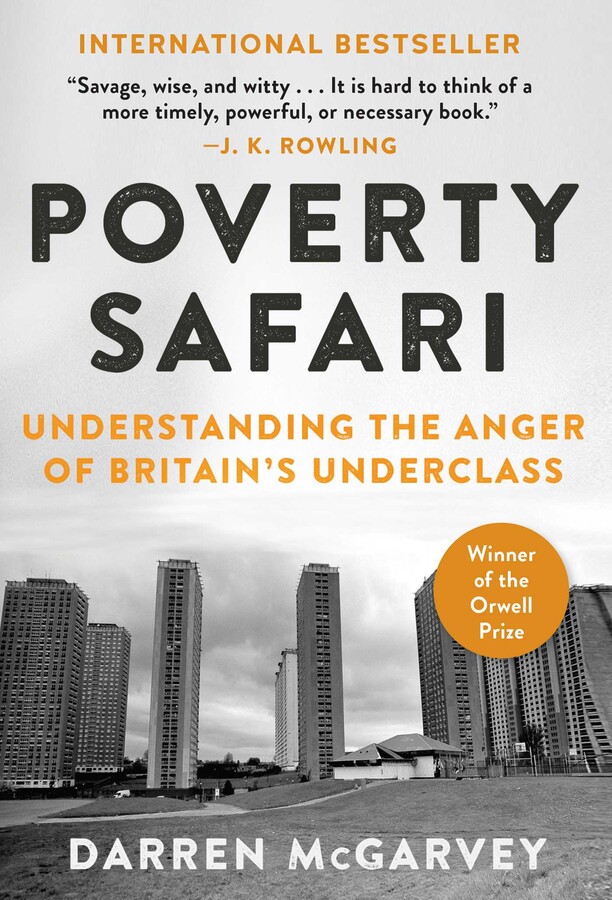 International Bestseller! For readers of Hillbilly Elegy and Evicted, the Orwell Prize–winner that helps us all understand Brexit, Donald Trump, and the connection between poverty and the rise of tribalism in the United Kingdom, in the US, and around the world.”

Darren McGarvey has experienced poverty and its devastations firsthand. He grew up in a community where violence was a form of currency and has lived through addiction, abuse, and homelessness. He knows why people from deprived communities feel angry and unheard. And he wants to explain . . .

So he invites you to come along on a safari of sorts. But not the kind where the wildlife is surveyed from a safe distance. His vivid, visceral, and cogently argued book—part memoir and part polemic—takes us inside the experience of extreme poverty and its stresses to show how the pressures really feel and how hard their legacy is to overcome.

Arguing that both the political left and right misunderstand poverty as it is actually lived, McGarvey sets forth what everybody—including himself—could do to change things. Razor-sharp, fearless, and brutally honest, Poverty Safari offers unforgettable insight into conditions in modern Britain, including what led to Brexit—and, beyond that, into issues of inequality, tribalism, cultural anxiety, identity politics, the poverty industry, and the resentment, anger, and feelings of exclusion and being left behind that have fueled right-wing populism and the rise of ethno-nationalism.

“Part memoir, part polemic, this is a savage, wise and witty tour-de-force. An unflinching account of the realities of systemic poverty, Poverty Safari lays down challenges to both the left and right. It is hard to think of a more timely, powerful or necessary book.”—J. K. Rowling

“Nothing less than an intellectual and spiritual rehab manual for the progressive left.”—Irvine Welsh

“George Orwell would have loved this book. It echoes Down and Out in London and Paris and The Road to Wigan Pier. It is heartrending in its life story and its account of family breakdown and poverty. But by the end there is not a scintilla of self-pity and a huge amount of optimism. It made me see the country and its social condition in a new light.”—Andrew Adonis, chair of judges, Orwell Prize 2018

“One of the best accounts of working-class life I have read. McGarvey is a rarity: a working-class writer who has fought to make the middle-class world hear what he has to say.”—Nick Cohen, Guardian

“His book is searing, and some of his recollections are unbearable. . . . But the real surprise is that the misery memoir is a disguise for a much more complex book. In the book he calls it a 'Tropjan horse' to draw the reader in, because what he really wants to say is that the cycle of abuse and addiction can be broken. He is living proof of that.”—Stephen Moss, Guardian, “Interview”

“Based on the environment in which he was raised, he explores the anger, resentment, and the sense of exclusion of the underclass, trying to explain what led voters to back Brexit and right-wing nationalism and populism. . . . He assigned himself the role of 'translating between the classes,' offering what he calls an “emotional reality” about deprivation that is rarely captured by statistics and demands an “emotional literacy” to be properly understood.”—Kimiko de Freytas-Tamura, The New York Times

“The man seems to be on his way to becoming one of the most compelling and original voices in Scotland’s, and maybe Britain’s, public debate. If Scotland’s underclass could speak in a single, articulate, authentic voice to communicate to the rest of us what it’s like to be poor, isolated, brutalized, lost, it would sound very much like this.”— Daily Mail

“A painfully honest autobiographical study of deprivation and how society should deal with it . . . [McGarvey] seems to offer an antidote to populist anger that transcends left and right . . . His urgently written, articulate, and emotional book is a bracing contribution to the debate about how to fix our broken politics.”—Financial Times

“What distinguishes Poverty Safari from a 'straight' description of a working-class life is his searing examination of the narratives that surround poverty—and the way in which no individual, least of all him, can neatly be fitted into them.”—Alex Clark, Orwell Prize 2018 judge

“Another cry of anger from a working class that feels the pain of a rotten, failing system. Its value lies in the strength it will add to the movement for change.”—Ken Loach

“A blistering analysis of the issues facing the voiceless and the social mechanisms that hobble progress, all wrapped up in an unputdownable memoir.”—Denise Mina, John Creasey Dagger Award–winning author

“Poverty Safari is an important and powerful book.”—Nicola Sturgeon, leader of the Scottish National Party and First Minister of Scotland

“If The Road to Wigan Pier [by George Orwell] had been written by a Wigan miner and not an Etonian rebel, this is what might have been achieved. McGarvey’s book takes you to the heart of what is wrong with the society free market capitalism has created.”—Paul Mason, journalist and author of Clear Bright Future