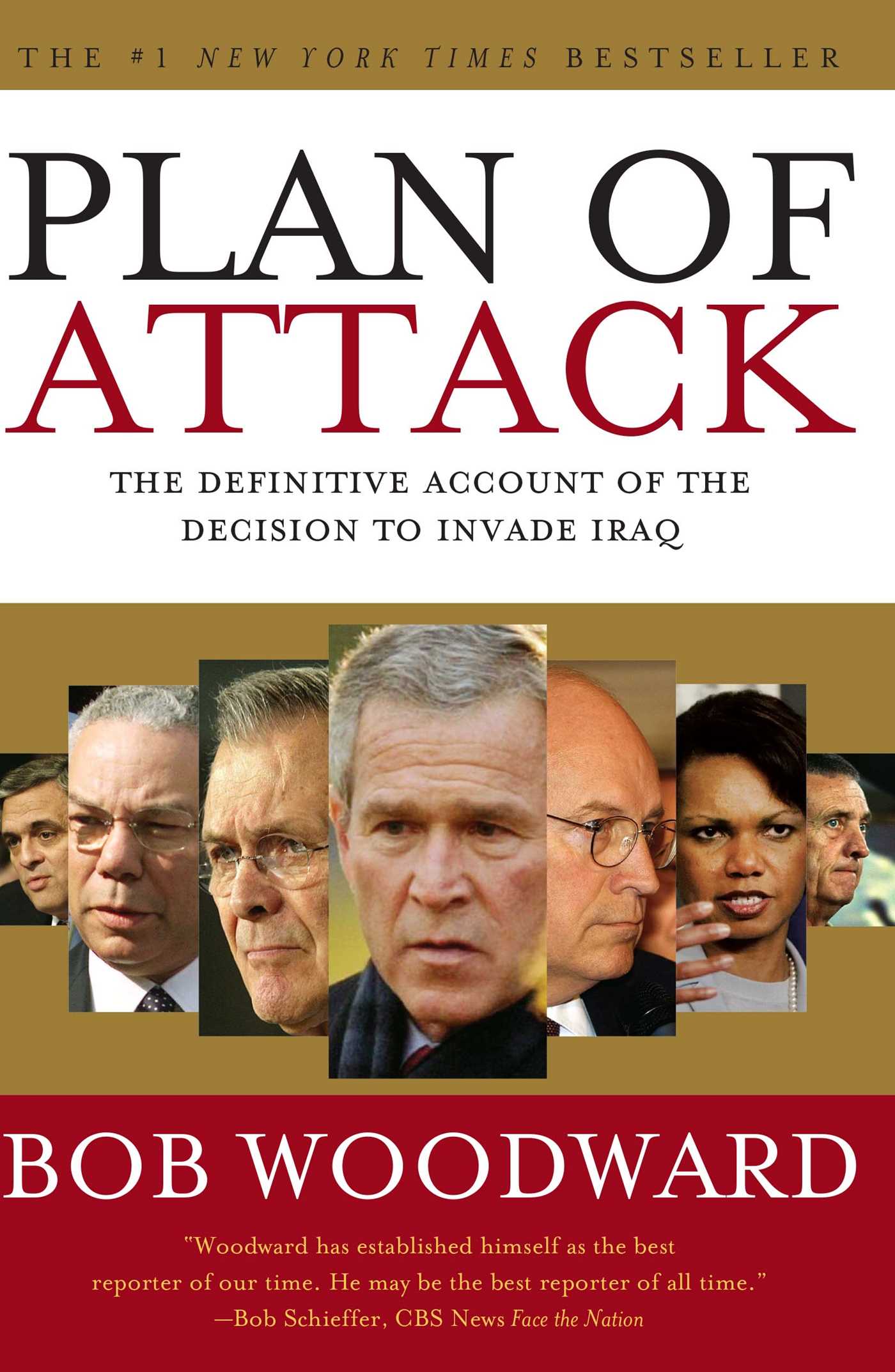 Plan of Attack is the definitive account of how and why President George W. Bush, his war council, and allies launched a preemptive attack to topple Saddam Hussein and occupy Iraq. Bob Woodward's latest landmark account of Washington decision making provides an original, authoritative narrative of behind-the-scenes maneuvering over two years, examining the causes and consequences of the most controversial war since Vietnam.
Based on interviews with 75 key participants and more than three and a half hours of exclusive interviews with President Bush, Plan of Attack is part presidential history charting the decisions made during 16 critical months; part military history revealing precise details and the evolution of the Top Secret war planning under the restricted codeword Polo Step; and part a harrowing spy story as the CIA dispatches a covert paramilitary team into northern Iraq six months before the start of the war. This team recruited 87 Iraqi spies designated with the cryptonym DB/ROCKSTARS, one of whom turned over the personnel files of all 6,000 men in Saddam Hussein's personal security organization.
What emerges are astonishingly intimate portraits: President Bush in war cabinet meetings in the White House Situation Room and the Oval Office, and in private conversation; Dick Cheney, the focused and driven vice president; Colin Powell, the conflicted and cautious secretary of state; Donald Rumsfeld, the controlling war technocrat; George Tenet, the activist CIA director; Tommy Franks, the profane and demanding general; Condoleezza Rice, the ever-present referee and national security adviser; Karl Rove, the hands-on political strategist; other key members of the White House staff and congressional leadership; and foreign leaders ranging from British Prime Minister Blair to Russian President Putin.
Plan of Attack provides new details on the intelligence assessments of Iraq's alleged weapons of mass destruction and the planning for the war's aftermath.

Bob Woodward is an associate editor at The Washington Post, where he has worked for forty-seven years. He has shared in two Pulitzer Prizes, first for the Post’s coverage of the Watergate scandal with Carl Bernstein, and second in 2003 as the lead reporter for coverage of the 9/11 terrorist attacks. He has authored or coauthored eighteen books, all of which have been national nonfiction bestsellers. Twelve of those have been #1 national bestsellers.

Tim Rutten, Los Angeles Times A remarkable book, one that fulfills the too often ephemeral promise of what has come to be called investigative journalism....The American people seldom have been given this clear a window on their government's most sensitive deliberations.

Michiko Kakutani, The New York Times Engrossing...Woodward uses myriad details to chart the Bush administration's march to war against Iraq. His often harrowing narrative not only illuminates the fateful interplay of personality and policy...but underscores the role that fuzzy intelligence, Pentagon timetables and aggressive ideas about the military and foreign policy had in creating momentum for war.

Michiko Kakutani, The New York Times Instantly essential...By far the most intimate glimpse we have been granted of the Bush White House, and the administration's defining moment.

SEE ALL
See more by Bob Woodward
Thank you for signing up, fellow book lover!