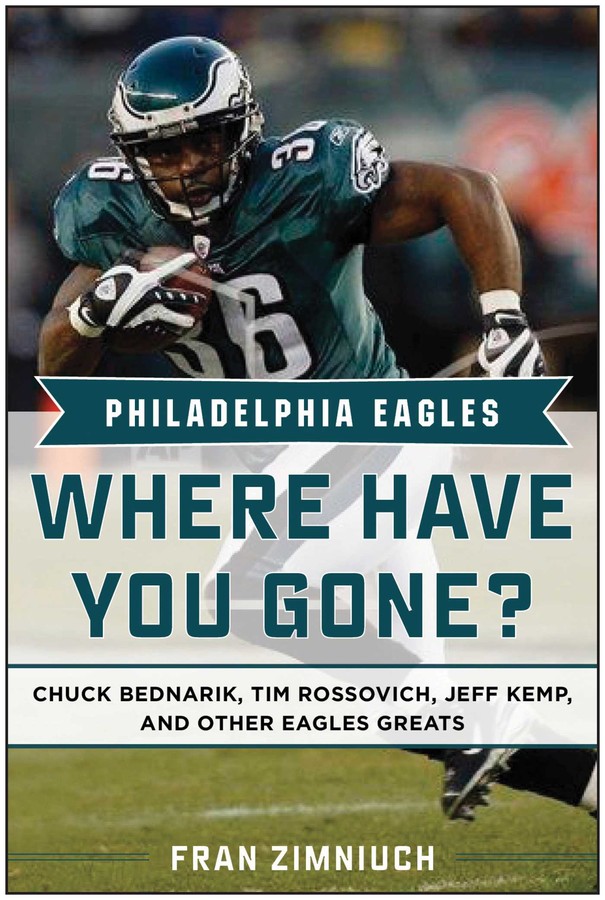 Part of Where Have You Gone?
By Fran Zimniuch
eBook
Hardcover
LIST PRICE $16.99
PRICE MAY VARY BY RETAILER

Philadelphia Eagles: Where Have You Gone? takes an informative stroll down memory lane with the Philadelphia Eagles of yesteryear, helping fans who are wondering where the time has gone. Local icons such as Chuck Bednarik, Tom Brookshier, and Ron Jaworski have remained in the spotlight years after their playing days ended. But this book tells fans about what happened to players like Pete Liske, Leroy Keyes, Super Bill Bradley, and other favorites who have made being an Eagles fan in Philadelphia so much fun.

The book goes beyond the helmet and shoulder pads and takes a look at the human side of these former guardians of the gridiron. From Norm Van Brocklin to Jeff Kemp, Wilbert Montgomery to Cyril Pinder, Jim Skaggs to Guy Morriss, and Don Hultz to Tim Rossovich, the book looks not only at the playing careers of many former Birds, but also at their lives after their playing days ended. Many former players have stayed in the game at some level and enjoyed coaching. Many fans, however, do not know which former Eagles player later became an NFL official, which former defensive standout became a salmon fisherman, which wide receiver became a respected judge, or which player now operates hospital-based centers treating sleep apnea. This reissue of Philadelphia Eagles: Where Have You Gone?, first published in 2004, reveals all this and more, providing fans with a look into the past while also bringing them up-to-date with some of Philadelphia’s greats.

Part of Where Have You Gone?
By Fran Zimniuch
eBook
Hardcover
LIST PRICE $16.99
PRICE MAY VARY BY RETAILER