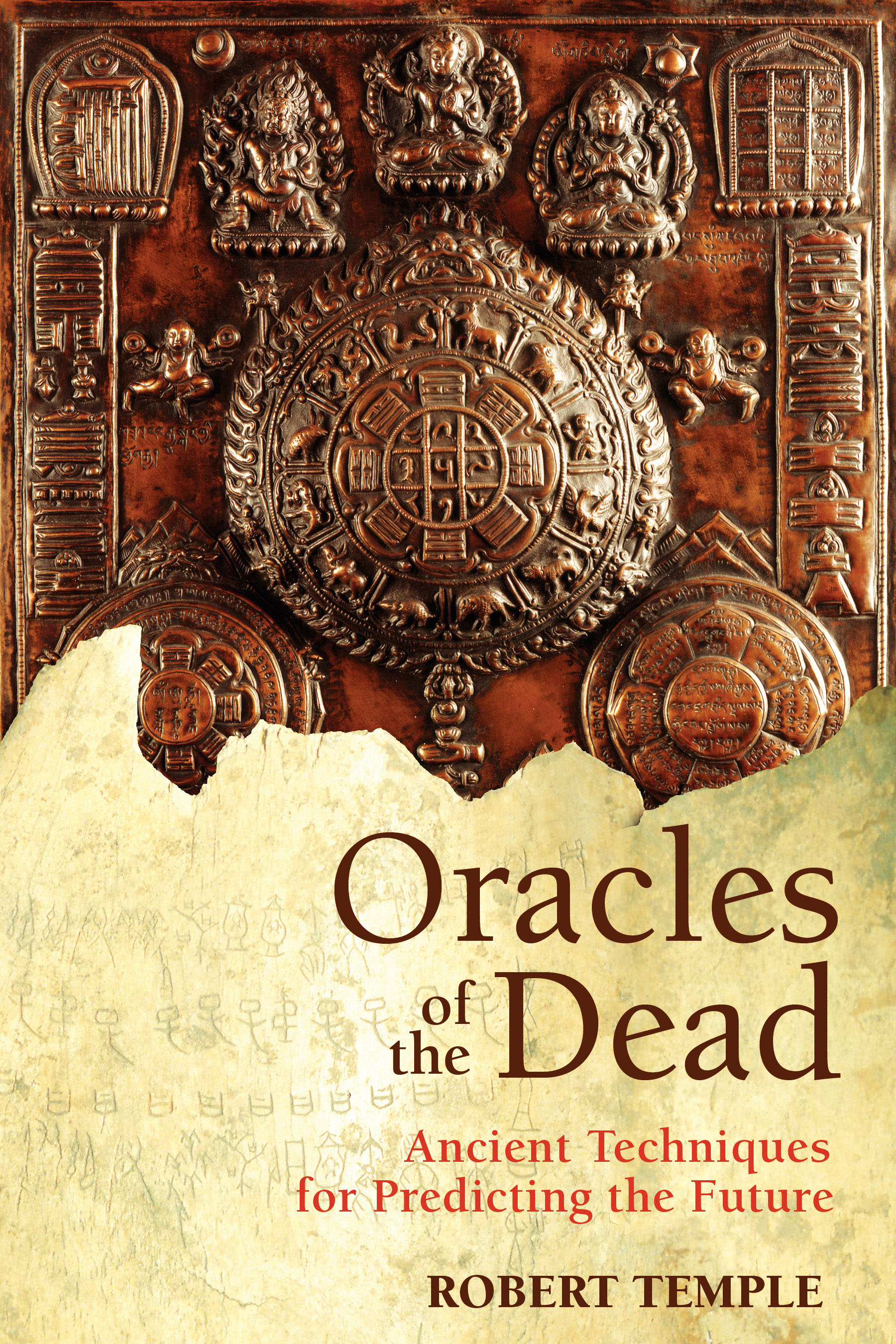 Oracles of the Dead

Ancient Techniques for Predicting the Future

By Robert Temple
LIST PRICE $19.95
PRICE MAY VARY BY RETAILER

Many methods for predicting the future, such as tarot, runes, the I Ching, and other divinatory oracles, can be traced back to ancient cultures. In Oracles of the Dead Robert Temple examines the Greek and Roman traditions and techniques of divination and compares them to those of ancient China. He reveals the real physical location of the "hell" of the ancient Greeks--known in antiquity as the Oracle of the Dead and used for séances intended to contact the spirits of the dead--and provides photographs from his explorations there.

Relating them to the ancient belief in the Oracle of the Dead, Temple examines the various mysteries associated with Delphi and the other oracles of the ancient world and explains how they were used to allow visitors to experience contact with the divine. Furthermore, his examination of the Chinese oracular system shows how the latest developments in science are validating the system of the I Ching.

The Descent into Hell

It should be emphasized that the main purpose of the Baian Oracle of the Dead was to allow a man the privilege of going through the entrance to Hell, of consulting there the dead spirit of a friend or relation, and of returning alive to the surface. The enquirer might wish merely to see again a lost loved one, or, more commonly, he might wish to pose some particular question or set of questions to the spirit in order to obtain its advice. Since Homer describes Odysseus as consulting the spirit of the seer Teiresias, apparently at Baia, the antiquity of the place must be considerable. It seems to have been in use for hundreds of years.

Consultation was so immensely expensive that the ordinary person could probably never have afforded it. But those rich and powerful enough to consult the Oracle certainly got their money’s worth. The Sibyl of Cuma and her priests and assistants who arranged the event with their Baian colleagues got first share of the largesse. In the Aeneid, Aeneas has to provide seven bullocks and seven ewes for the Cumaean Sibyl. Since only small portions of these sacrifices were actually made as offerings to the deities, these beasts would provide enough meat, fat, offal, hides, and even wool to make life comfortable for the religious officials of Cuma for a considerable period. In addition, the beasts would have been purchased by the visiting enquirer from the very same officials, thus filling the priests’ pockets with ready money at the same time. Vast quantities of the best olive oil also had to be purchased to pour over the carcasses as they roasted, and we can be sure that many jars were left over for the priests’ use afterwards. It was also necessary to purchase an expensive bronze tripod, yet more olive oil, wine, and barley cakes as offerings to the Sibyl herself. Naturally the more eager the enquirer, the more lavish he would be in what he gave her.

The enquirer would be directed or led to Baia, where another set of officials conducted the actual consultation of the Oracle of the Dead. Additional sums of money were probably charged as consulting fees. The officials were meanwhile running up considerable expenses on their own part. They were filling more than 500 lamps with oil and wicks and preparing large numbers of torches, costumes, and assorted props. But these background activities were not known to the enquirer. He himself would most likely be in great awe and apprehension of his forthcoming ordeal, and entirely preoccupied with what had brought him to the Oracle in the first place--most likely a dilemma he hoped the Oracle would resolve.

Having been brought to the temple precincts outside the entrance to the Baian tunnel complex (these outer precincts being now mostly gone), the enquirer was detached from his friends and associates and led alone into a room that Paget and Jones have named the “Painted Room.” Virgil refers to it as being “before the vestibule itself and in the first jaws of hell.” He describes the paintings and the enquirer’s (Aeneas’s) jumpiness, “disconcerted with sudden fear,” pointing his sword at the painted images. On the walls were horrifying paintings that portrayed various diseases, old age, fear, war, poverty, sleep, “joy of sinning,” hunger, strife, insanity, and “the counselor of evil.” The enquirer would have plenty of time to dwell on these sobering and graphic pictures, for he seems to have stayed alone in the Painted Room for three whole days with no other amusement. He would come to know every detail of the gruesome visages before him in his isolated room, and how marked would be their effects on his narrowed attention! Three days of isolation in these surroundings were a necessary part of putting the enquirer into the right frame of mind. We can imagine him jumping at the slightest noise and expecting almost anything to happen.

We must remember that the ancient peoples had little or no exposure to powerful and horrifying visual images. Today we see so many images of all kinds on television, in newspapers, magazines, and films that our senses are to some extent deadened and jaded by overexposure to horror. But this was not the case with the ancients. They would have been far more susceptible to the suggestiveness of the Painted Room. By the third day ghostly hallucinations would almost certainly have begun to assail the enquirer.

In recent years, an experimental study of such sensory deprivation was undertaken for a four-day period. “Several [subjects] became fearful that something terrible might happen to them or that they might be affected adversely. . . . Others reported later that they had been unable at times to distinguish wakefulness from sleep, feeling that the room was closing in on them or that their bodies were different from normal.” Feelings of fear built up, no accurate perception of time remained, and their thinking became confused.

But just as interesting as the effects during the confinement were those just after release: “On release, after ninety-six hours in the dark and quiet, ordinary visual objects were seen as exceptionally rich in detail and saturated in hue, with more sounds apparently crowding in on them . . . these effects lasted for no more than a few hours.” We shall see that it was at just about this point of maximum suggestibility and grossly heightened perception of color and sound that our enquirer “descended into Hell.” Before these effects could abate, and when he was in a debilitated state of maximum confusion, unable to summon any inner resources or pull himself together, he was rushed down into the Baian tunnels for his experience of the Underworld. By the time he could come to himself once again, the descent into “Hell” would be over.
Robert Temple

Robert Temple is visiting professor of the history and philosophy of science at Tsinghua University in Beijing; fellow of the Royal Astronomical Society; member of the Egypt Exploration Society, Royal Historical Society, Institute of Classical Studies, and the Society for the Promotion of Hellenic Studies; and visiting research fellow of the University of the Aegean in Greece. He is the author of 12 books, including The Sphinx Mystery, The Sirius Mystery, Oracles of the Dead, and The Genius of China. He wrote, produced, and presented the documentary film Descent into Hell, based upon his book, Oracles of the Dead, for National Geographic Channel. His translation of the Epic of Gilgamesh was staged at the Royal National Theatre in London in 1993. He resides in England with his wife, Olivia. They are joint translators of Aesop: The Complete Fables.

"A uniquely powerful account of a hidden side to the story of mankind, as it affects us still today. Not only has Robert Temple revealed the secrets of the underground Greek Oracle of the Dead, which was lost and forgotten for more than two thousand years, but he has broken the spell that has kept the innermost secrets of the Chinese I Ching hidden for more than three thousand years. His research, whether carried out by crawling through dangerous ancient tunnels or prowling the corriders of the world's libraries like a panther on the track of a scent, is overwhelming."

"Temple suggests modern science is just starting to appreciate the higher-order mathematical structure and geometric framework which are implicit in the I Ching and make it such an interesting system for our times. A fascinating insight into the prophetic underside of history and notions of fate, fortune and probability."

“Oracles once ruled the secret life of humanity. This is the best book I have ever read on those mysterious temples and techniques that preserved age-old traditions of seeking knowledge of the future.”

“A unique journey of discovery, an adventure beyond most people’s wildest dreams. Only someone with Robert Temple’s originality, persistence, and courage could have undertaken it. This book enables us to accompany him to places where mythology, archaeology, ritual, and spiritual vision meet.”

– Rupert Sheldrake, author of The Presence of the Past and A New Science of Life

"For those interested in the history of prophecy as it relates to the I Ching, Oracle-Bones, the Baian prophecy site, and prophecy through entrails, this is a must read book."

". . . an amazing history of divination that is both revealing and educational."

"Temple makes progress in enhancing the understanding and ultimate value of divination by relating a divinatory system to physical reality. His investigation of Greek and Roman ancient divinatory practices could well stand as a book in its own right."

– Ashé! Journal of Experimental Spirituality, May 2006

Oracles of the Dead

Ancient Techniques for Predicting the Future

By Robert Temple
LIST PRICE $19.95
PRICE MAY VARY BY RETAILER