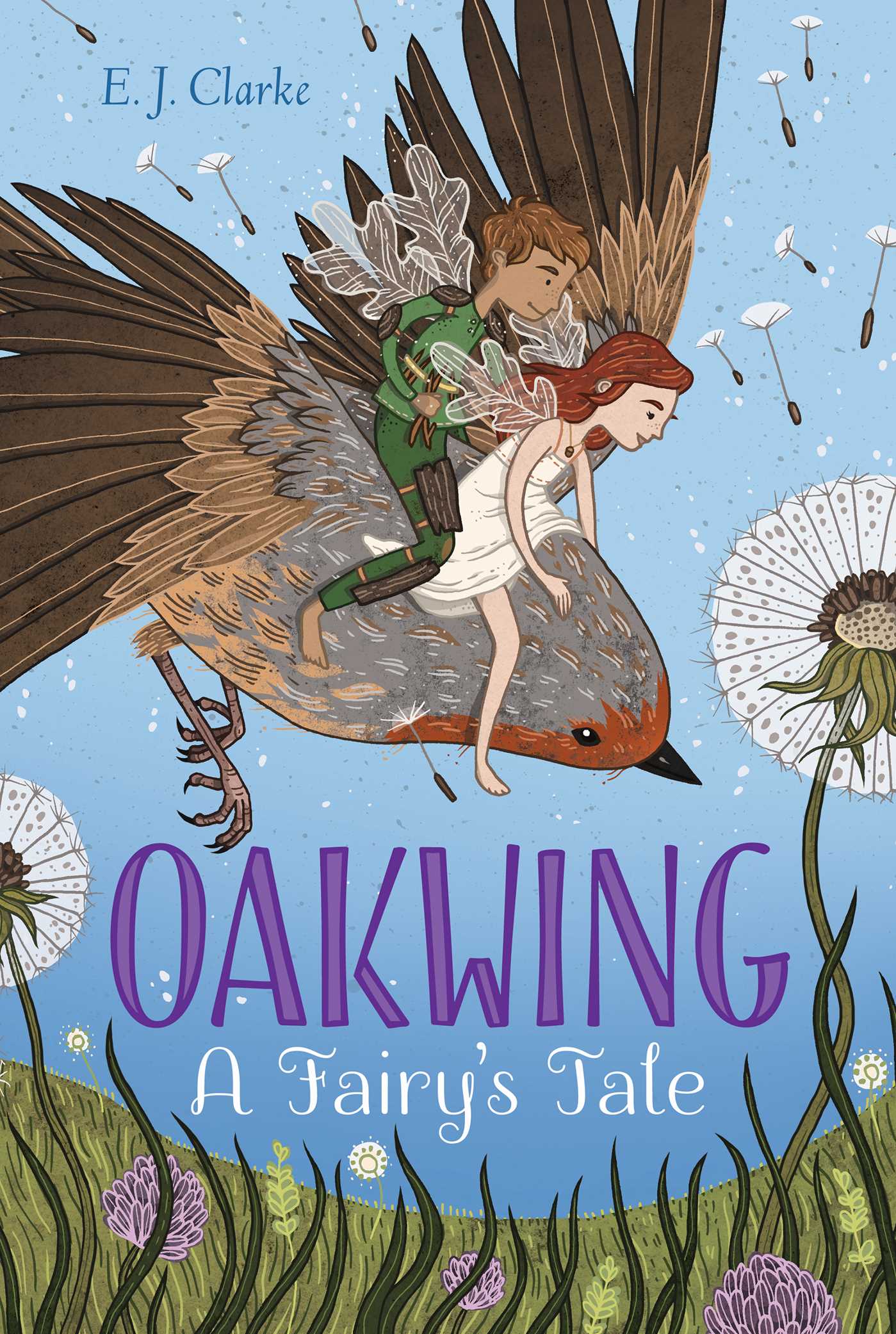 A twelve-year-old girl finds herself on an epic adventure of tiny proportions after she’s magically transformed into a fairy in this stunning debut novel from E.J. Clarke.

Rowan’s mother went missing seven years ago. On the anniversary of her disappearance, Rowan cries herself to sleep beneath their favorite tree in Hyde Park, in the very heart of London. When she wakes up she’s tiny…and has wings.

She uncovers a hidden world of fairies and foxes, and sets out on a perilous journey to find the one person she misses more than any other. With new friends by her side and fierce enemies at her heels, she’ll discover powers she never imagined, and a courage she never knew she had.

Oakwing * Chapter One * HAPPY TUESDAY
Rowan always got up before everyone else. She’d sit with a glass of apple juice and gaze out the window, high above the noise of London in their block of apartments, watching the orangey morning light bouncing off the glassy skyscrapers in the distance. She liked to have a little time to herself before the day began, time when she didn’t have to worry about the others. Now that Mom wasn’t around, looking after the family was up to her.

Dad wasn’t much help. He didn’t do much of anything anymore. He hadn’t done a lot of smiling in the seven years since Mom had vanished. He’d done a lot of sitting. A lot of staring at the TV, even when it wasn’t on. He went to his job during the day, though Rowan didn’t really understand what it was. Something at the Council that involved computers and talking to as few people as possible. All she knew was that he wasn’t really like other dads. Her friends’ dads took her friends swimming, or for bike rides in the park, or walked them to school. She would have been happy with any one of those. But Rowan still couldn’t swim or ride a bike, because her dad had never taught her. She had to get herself and her sister ready for school every morning. Dad could barely look after himself, let alone his two daughters.

Rowan heard alarm clocks ringing in other parts of the apartment, and the banging and thumping sounds of two people not really wanting to get up. She took a deep breath and headed into the kitchen to start getting the breakfast ready. She opened a cupboard to pull out a box of cereal, but her hand clutched at thin air. “Oh, Dad,” she sighed. She closed the door, and noticed the calendar hanging on the wall. Her eyes widened as she saw the date. In one quick movement she grabbed the calendar off the wall and stuffed it beneath a pile of dish towels.

Willow yawned her way into the room, making Rowan jump. Her little sister was wearing pink from head to toe, and had a pair of gauze fairy wings attached to her back with elastic.

“Did you sleep in those?” Rowan asked.

She flopped down into a chair, staring at the space in front of her, as if she were waiting for a bowl of cereal to magically appear. Instead Rowan slid a plate with two pieces of limp, dry toast in front of her.

“Dad forgot to go to the shops on the way back from work,” said Rowan.

Something banged against the hall wall. “Ouch!”

Rowan and Willow looked toward the kitchen door as their dad stumbled in, rubbing his head. He looked like a schoolboy who didn’t know how to dress himself. He’d knotted his tie, but it was yanked off center. One side of his collar was up, the other down, and a lock of his hair was stubbornly sticking up at an angle. He had at least shaved, but he’d cut himself a number of times and had little pieces of toilet paper stuck to his face to stop the bleeding. Rowan nodded over at Willow, who immediately put down her toast, wet some paper towel under the tap, and climbed onto a chair. She reached up and plastered her dad’s unruly lock of hair down. Meanwhile Rowan straightened his tie and arranged his collar, before rattling a plate of toast onto the table in front of him.

Without a word their dad sat down and began eating. Then he froze with a piece of toast in midair as he stared at the wall. “Something’s missing,” he said.

“No, no, I don’t think so,” said Rowan, managing to catch Willow’s eye and nodding urgently toward the stack of towels.

“It’s the calendar!” Willow piped up. “Rowan put it under the dish towels!”

Rowan rolled her eyes. Willow whipped out the calendar and handed it over to their dad.

Rowan tried to wrestle the calendar away, but she was too late.

“Oh,” said Dad as his finger traced across the day’s date. The twelfth of August. The day when Mom had disappeared seven years before. The day she’d decided to go to Hyde Park on her own. The day she never came back.

There was an awkward silence around the table. Dad made an odd face. Willow looked back and forth from Dad to Rowan. But neither of them said a word. Dad stared down at his toast.

Dad’s head jerked back up. “I thought school had finished for the summer?”

“It has, Dad. You’re taking Willow to Gracie’s house on the way to work, remember?”

He wrestled Willow and her wings into a shabby coat she was too big for and bustled her out of the kitchen toward the front door, with Rowan following. He stopped as if he had forgotten something, turning back to look at her. “What about you? What are you going to do?”

“Don’t worry, Dad,” Rowan replied with a halfhearted smile. She was used to fending for herself. “I’ll find something.”

The silence grew between them. Then he stepped out into the corridor.

Dad closed the door behind him as Willow’s shouts echoed down the stairwell. “See ya, Rowan Snowman!”

She turned back into the apartment. Their home suddenly seemed much bigger and quieter. A baby started crying a couple of floors away. Rowan looked at the clock. It was still only nine a.m. She wandered back into the living room and picked up a picture frame from the sideboard. It was a photograph of her mom in happier days, playing a violin in an orchestra. As she looked at the picture, Rowan could almost hear the music. How beautiful it was too. “It’s not just a violin,” her mom would tell Rowan. “It’s a machine for making your heart sing.” Once, the apartment had been filled with her mother’s music. The violin had been almost the only thing that could stop baby Willow from crying. Though sometimes the hair dryer would do the trick.

Rowan looked more closely at the photo, her finger tracing across her mother’s neck, where a necklace seemed to be. It was hard to make out, but the wooden charm looked like a miniature tree. Rowan raised a hand to her own throat, pulling out a necklace from beneath her T-shirt—the charm was a wooden acorn.

A thought suddenly occurred to Rowan. She strode into her dad’s bedroom. After climbing on top of a chair, she opened a cupboard above the unmade bed. She pulled out a few old rolls of Christmas wrapping paper, a pile of raggedy towels, and some shoeboxes with high-heeled shoes spilling out. Right at the back of the cupboard was a dusty black instrument case. She lifted it gently down, put it on the bed, and popped the locks to carefully open the lid. Nestled in the case’s velvet-lined interior lay her mother’s violin. Rowan gently lifted it out, as though she were cradling a newborn baby. She held the polished wooden instrument to her chin, then realized she didn’t have a bow. She scrambled back up onto the chair and, standing on tiptoes, saw that in the corner of the cupboard was another case. She stretched as hard as she could to reach for the box, and finally grasped it and pried it open to reveal . . . a long, wooden bow strung with horsehair.

Rowan climbed back down. She held the violin to her chin and poised the bow above it. She closed her eyes and drew the bow across the violin’s strings. Screeech! This was not how she remembered it sounding. Rowan winced and tried again. The second time was even worse. Now it screamed even louder, like the foxes that sometimes woke her up at night. It was no use. Her shoulders sagged as she carefully set the violin back in its case and hid everything back in the cupboard. She worried what Dad might say if he knew she’d been in there.

She padded back into the living room and slumped down in the chair that used to be her mom’s favorite. It was an old armchair that had seen far better days, and had belonged to Rowan’s grandfather. Dad had kept the chair just as it had been when their mom was with them. It didn’t face the television like the sofa and her dad’s chair, but looked out the window instead. Their block of apartments wasn’t the loveliest place in the world, with its cold concrete stairwells and peeling gray paint, but by far the best thing about it was the view. From high up in their tower, they could see all the way across London. Past the London Eye, over the great winding River Thames, through the ocean of brick and glass, and beyond to the little green desert islands of Hampstead Heath and Primrose Hill. Rowan’s mom had loved nature. She’d grown up in the country and had never stopped missing it. That was why Rowan and her sister were named after trees. When she couldn’t visit the parks, Mom would sit here and gaze at them from afar.

As Rowan sat in her mom’s favorite chair, she realized what she needed to do. Today of all days.
E. J. Clarke

E.J. Clarke is the author of the Oakwing series. It came from an idea that popped into his head and wouldn’t leave. He lives in North London and is married with two young daughters who would like to be fairies. He hopes this book will give them that chance. When he’s not writing about fairies he works for a company that makes films and television programs.