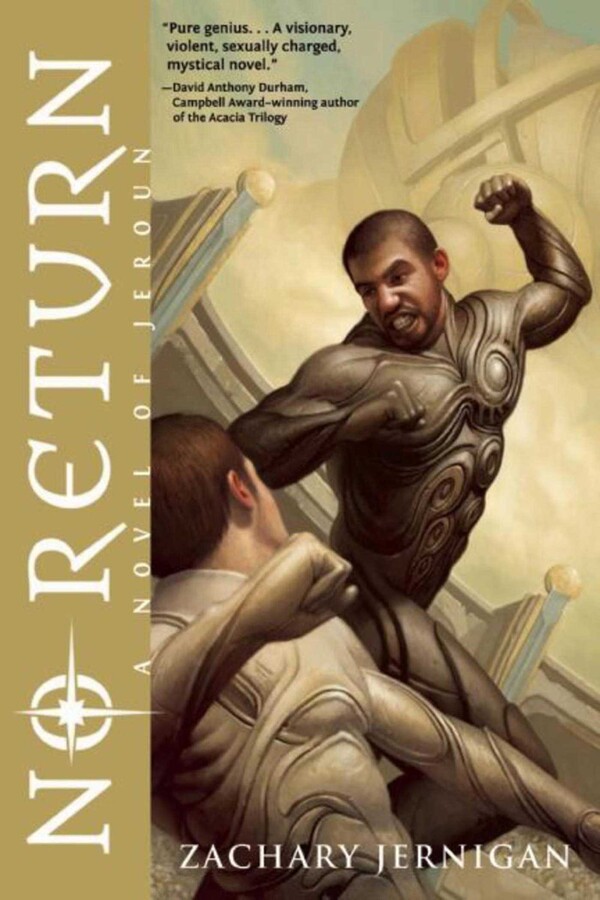 Staring into the night sky, the inhabitants of Jeroun call the glittering string of objects they see stretching before the moon the Needle. It’s actually a collection of iron spheres made by the god Adrash, his threatening ultimatum to the people on the planet below:

Prove yourselves worthy, or be destroyed.

Vedas is a member of the Black Suits, an order of men and women who show their opposition to Adrash by staging battles in the streets. After witnessing the death of a child in his care and knowing himself to be responsible, he sets off on a journey to the decennial fighting tournament in Danoor.

Traveling with him across the continent are Churls, a mercenary haunted by the ghost of her daughter, and Berun, a constructed man made of modular spheres possessed by the soul of his creator. Both come to understand that Vedas's victory would start an all-out religious war.

Unbeknownst to these three travelers, the aristocratic outbound mage Ebn and her protégé Pol are using powerful alchemy to travel into space, with plans to engage Adrash in ways that threaten to bring the god’s wrath down upon the world.

No Return combines the mythic inventiveness of early Roger Zelazny and Samuel R. Delany, the dark weirdness of China Mieville, and the epic scope of George R. R. Martin, creating a literary science fiction novel that defies easy categorization and resulting in one of the most critically acclaimed debuts of 2013.

The most daring debut novel of 2013.”
Staffer’s Book Review

Pulls no punches in its rich, visceral depictions of sexuality, martial arts, punk energy, and the philosophical quandaries of power and identity that speculative fiction uniquely exploitsand that few up-and-coming speculative writers outside Jernigan tackle with such guts.”
The A.V. Club

The most daring debut novel of 2013.”
Staffer’s Book Review

Pulls no punches in its rich, visceral depictions of sexuality, martial arts, punk energy, and the philosophical quandaries of power and identity that speculative fiction uniquely exploitsand that few up-and-coming speculative writers outside Jernigan tackle with such guts.”
The A.V. Club