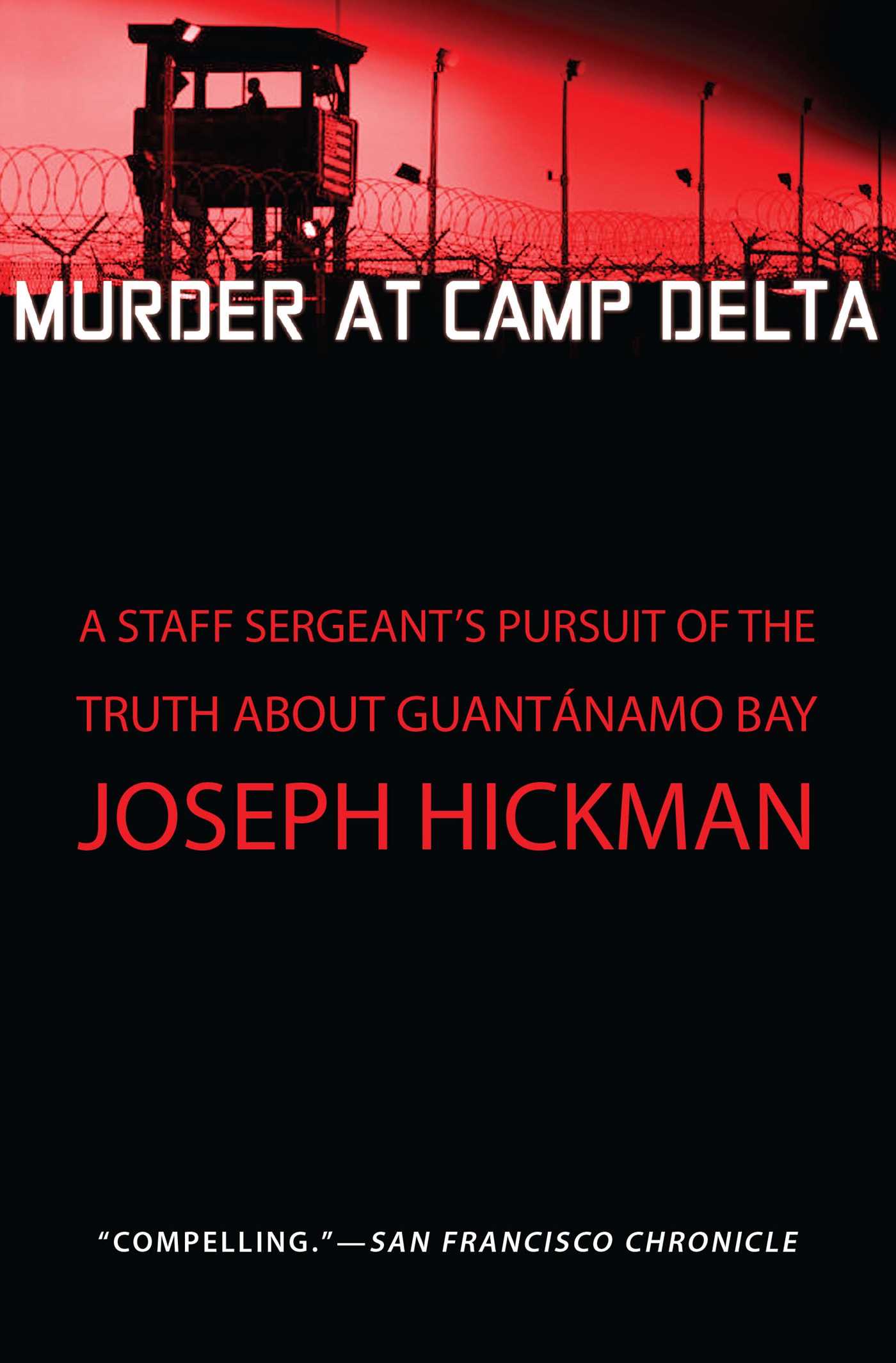 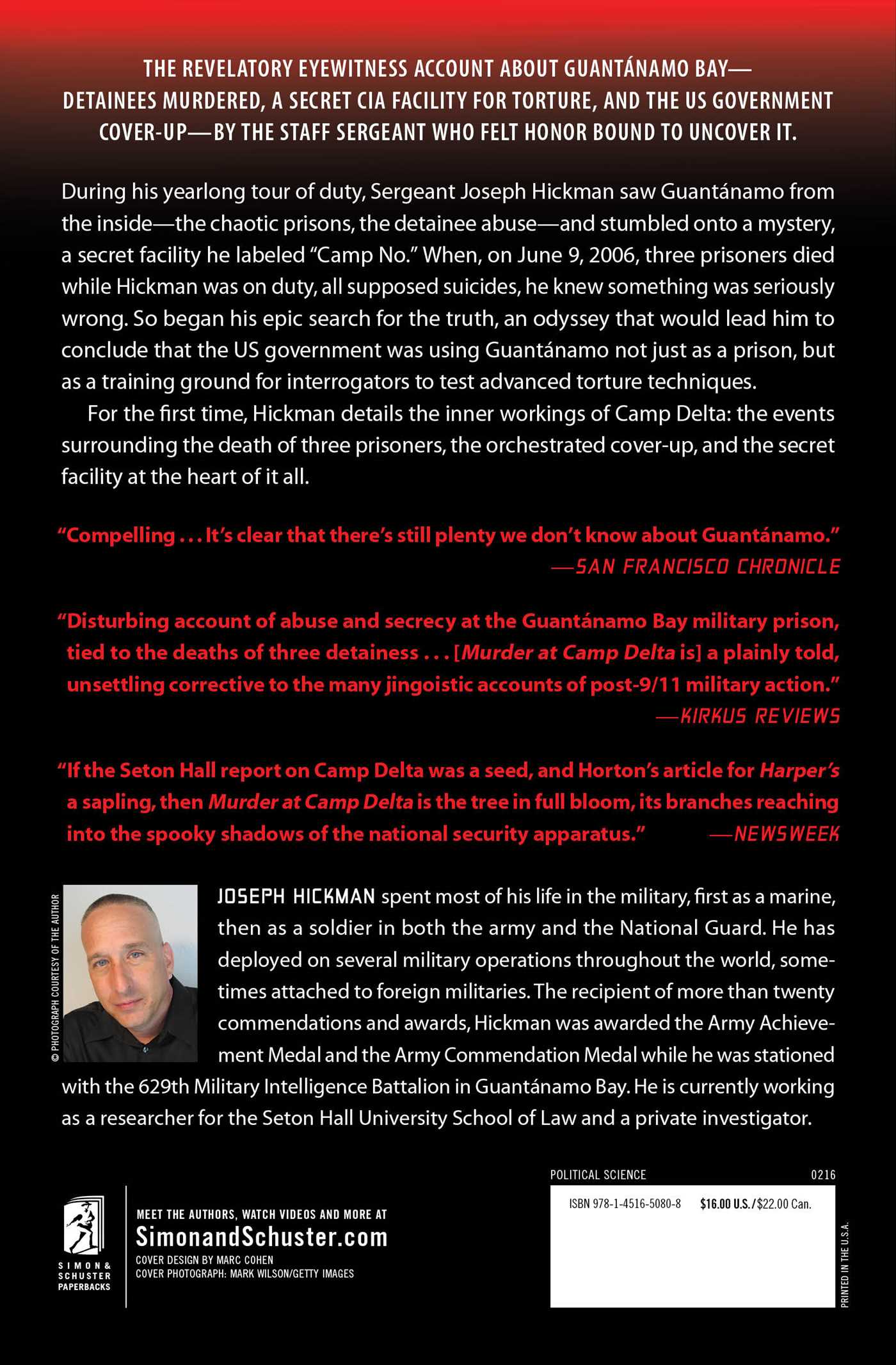 By Joseph Hickman
LIST PRICE $16.00
PRICE MAY VARY BY RETAILER

The revelatory inside story about Guantánamo Bay—and the US government cover up—by the Staff Sergeant who felt honor-bound to uncover it: “A disturbing account…made with compelling clarity and strength of character” (Publishers Weekly).

Staff Sergeant Joe Hickman was a loyal member of the armed forces and a proud American patriot. For twenty years, he worked as a prison guard, a private investigator, and in the military, earning more than twenty commendations and awards. When he re-enlisted after 9/11, he served as a team leader and Sergeant of the Guard in Guantánamo Naval Base. From the moment he arrived at Camp Delta, something was amiss. The prions were chaotic, detainees were abused, and Hickman uncovered by accident a secret facility he labeled “Camp No.” On June 9, 2006, the night Hickman was on duty, three prisoners died, supposed suicides, and Hickman knew something was seriously wrong. So began his epic search for the truth, an odyssey that would lead him to conclude that the US government was using Guantánamo not just as a prison, but as a training ground for interrogators to test advanced torture techniques.

For the first time, Hickman details the inner workings of Camp Delta: the events surrounding the death of three prisoners, the orchestrated cover-up, and the secret facility at the heart of it all. From his own eyewitness account and a careful review of thousands of documents, he deconstructs the government’s account of what happened and proves that the military not only tortured prisoners, but lied about their deaths. By revealing Guantánamo’s true nature, Sergeant Hickman shows us why the prison has been so difficult to close. “Murder at Camp Delta is a plainly told, unsettling corrective to the many jingoistic accounts of post-9/11 military action” (Kirkus Reviews).

No Sleep Till Gitmo March 10, 2006
THE flight to Gitmo from Fort Lauderdale, Florida, should have taken an hour. It was about four hundred miles away as the crow flies. But because of the long-standing hatred between America and Fidel Castro’s communist regime, American planes were required to fly the long way around Cuban airspace to prevent an international incident, adding another two hours to the flight. My unit, the roughly 120 men of Company E from the 629th Military Intelligence Battalion, had flown overnight to Fort Lauderdale from Fort Lewis, Washington. None of us slept on the way into Fort Lauderdale. We’d been occupied the day before dealing with our gear, and spent the dark hours at the airport waiting for the four-in-the-morning flight to Gitmo. I’d been up for more than twenty-four hours when I climbed aboard the Boeing 727. It should have been a miserable flight, but I was so excited that I couldn’t sleep. Very few of the guys on the plane to Gitmo were able to sleep, either. The sun came up about an hour into our flight, and I could hear the younger men in the unit laughing in the adjacent seats.

“So what do you think the place will really be like?” I heard a voice behind me ask.

“Absolutely nothing like what we’ve been told,” came the reply.

“There’s a small seed of wisdom in that,” I thought. As a team leader in my platoon, I was worried about what we’d face when we landed. Mine wasn’t a top command position, but one thing I learned in the military was a sense of responsibility for the men under me. It’s a responsibility I took to heart. As our plane drew closer to the landing field at Gitmo, my heart was not completely at ease. We had all become close during our eight-week training, and I had no worries about any man on my squad not doing his job. We had been briefed repeatedly that we were being given a potentially tough mission, and we were ready for the challenges ahead. We were told constantly in our training that the detainees would take any chance they could to kill us, and that they were highly motivated fanatics. My worry wasn’t that any guy on the team would flinch but that someone might get hurt.

Company E was divided into three platoons, with each platoon divided into four ten-man squads, and each squad broken into two five-man teams. I was in First Platoon, second squad, and team leader of its five-man Bravo Team. Everyone from my squad sat together on the plane. Most of them were good soldiers, as far as I was concerned.

The guys in my squad covered an extreme range of ages and experiences.I Phillip Bradley, who was fifty-one years old, was a former Army Ranger, but that was decades ago. He’d spent most of his working life with the coroner’s office in Baltimore, picking up and delivering bodies from autopsies and crime scenes. “We tag ’em and bag ’em,” he’d say of his civilian duties. The youngest in our squad was eighteen-year-old Specialist Jamal Stewart, whom we all called “Young’n.”

One of the guys I was closest to was Private First Class José Vasquez, thirty-eight years old. Vasquez was from DC, where he worked as a private investigator. I’d met him a year earlier in Japan, when he’d deployed there with my unit on a training mission. Everything that came out of his mouth was a joke. Sometimes I had to watch it with Vasquez, because he tended to speak his mind to officers. Even if my guy might be in the right, a blunt-speaking enlisted man could get the whole squad in trouble.

The one person we all had faith in was our squad leader, Staff Sergeant Michael Hayes. When not on guard duty, Hayes was a cop at Morgan State University, a historically black college in Baltimore. Before that he was a marine, and in my experience, former marines tended to be among the best leaders. He was six years younger than me, and though he stood, at most, five feet ten inches, Hayes carried himself like a giant. In my military career, he taught me more than any other leader I ever served under. With him leading our squad, I had as much confidence as possible.

Our squad was predominantly African American. In fact, after two white guys were pulled from the platoon—one because he was needed for another mission, and the other because he couldn’t get along with black people—I was the only Caucasian left. Vasquez was light skinned but a proud Mexican. Like most people in the military, race and ethnicity didn’t concern me. Soldiers were soldiers. But everybody else in our platoon was white, and that bothered all of us. They had segregated all the black guys and the Mexican into one squad. I guess they figured I belonged because I was from Baltimore. It was wrong, and all of my guys knew it. The military has spent decades integrating its units. For commanders to segregate a unit was almost unheard of in 2006. Worse, it made us very uneasy about the overall wisdom of our company’s officers. Despite my positive impression of Staff Sergeant Hayes, the leadership of our company was the biggest concern on my mind. Our training experience at Fort Lewis with our commanders had been, in a word, awful.

I. I have changed the names of the personnel at Guantánamo with the exception of the command officers whose names have been widely reported. 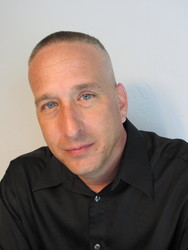 Joseph Hickman spent most of his life in the military, first as a marine, then as a soldier in both the army and the National Guard. He has deployed on several military operations throughout the world, sometimes attached to foreign militaries. The recipient of more than twenty commendations and awards, Hickman was awarded the Army Achievement Medal and the Army Commendation Medal while he was stationed with the 629th Military Intelligence Battalion in Guantánamo Bay. He is currently working as an independent researcher and Senior Research Fellow at Seton Hall Law School’s Center for Policy and Research.

"Joseph Hickman's chilling account about the "suicides" of three young "war on terror" detainees is the final nail in Guantanamo's coffin that should lead to the closure of the detention facility, once and for all. Hickman risked his life and military career investigating the circumstances behind the deaths of these captives and his journey is laid bare in this gripping narrative about his nearly decade-long hunt for the truth. What he found is revelatory and disturbing. By the time you reach the last page of Murder at Camp Delta, you will understand what "Honor Bound to Defend Freedom" means and why, for Hickman, it was more than just a slogan. Murder at Camp Delta is a game changer. It will go down in history as one of the most important books to be written about the war on terror."

"Sgt. Joe Hickman has written a terrific, riveting, and deeply disturbing book. I am shocked by what he reveals. Governments have always tended to suppress embarrassing facts; as the French general staff explained to investigator Col. Picquart during the Dreyfus Affair: "what importance is the innocence of one Jew compared to the reputation of the French Army?" But like Col. Picquart, Sgt. Hickman is compelled by an inner moral code to pursue truth and justice, regardless of the cost to himself. Our country badly needs such men. The truth always matters."

– Thomas Wilner, Counsel of record for Guantanamo detainees before the U.S. Supreme Court in Rasul v. Bush and in Boumediene v. Bush

“Disturbing account of abuse and secrecy at the Guantanamo Bay military prison, tied to the deaths of three detainess...[Murder at Camp Delta is] a plainly told, unsettling corrective to the many jingoistic accounts of post-9/11 military action.”

“[A] disturbing account of the mysterious deaths of three Arab prisoners at Guantanamo Bay in 2006…. [Hickman] makes his case with compelling clarity and strength of character.”

“If the Seton Hall report on Camp Delta was a seed, and Horton’s article for Harper’s a sapling, then Murder at Camp Delta is the tree in full bloom, its branches reaching into the spooky shadows of the national security apparatus.”

“This is an important chronicle of the disillusionment of a longtime American soldier…If America is to regain its honor, the truth about Guantánamo must be told, and for this reason Joseph Hickman is, as he says in the opening sentence of his necessary book, a "patriotic American."

“Murder at Camp Delta is a book of, by, and for true believers in patriotism and militarism.”

"Compelling... It's clear from his version of ... that there’s still plenty we don’t know about Guantanamo, a prison in which horrifying acts were carried out in the name of every American citizen."

"Murder at Camp Delta may be the book that finally closes Guantánamo Bay."

By Joseph Hickman
LIST PRICE $16.00
PRICE MAY VARY BY RETAILER