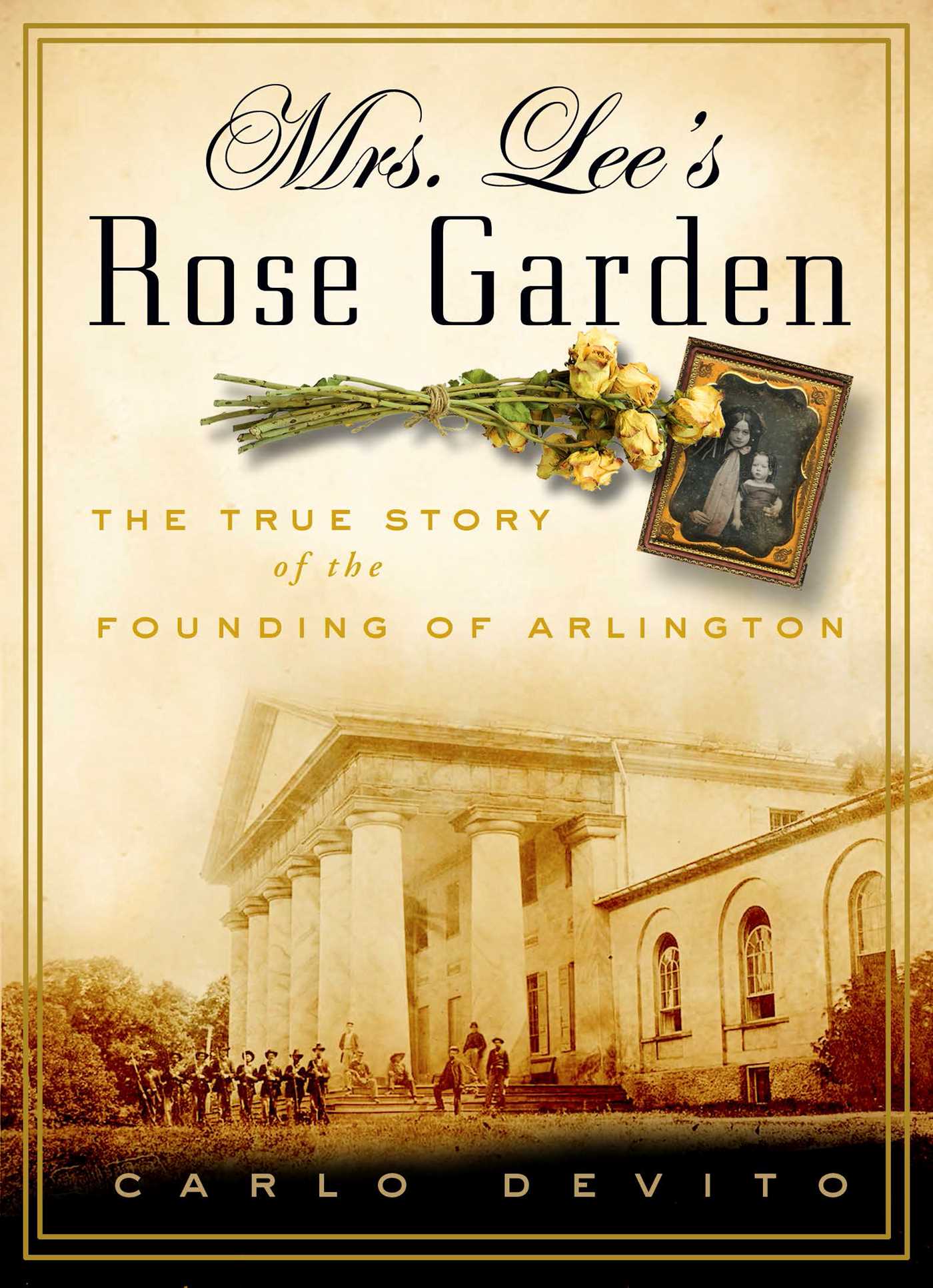 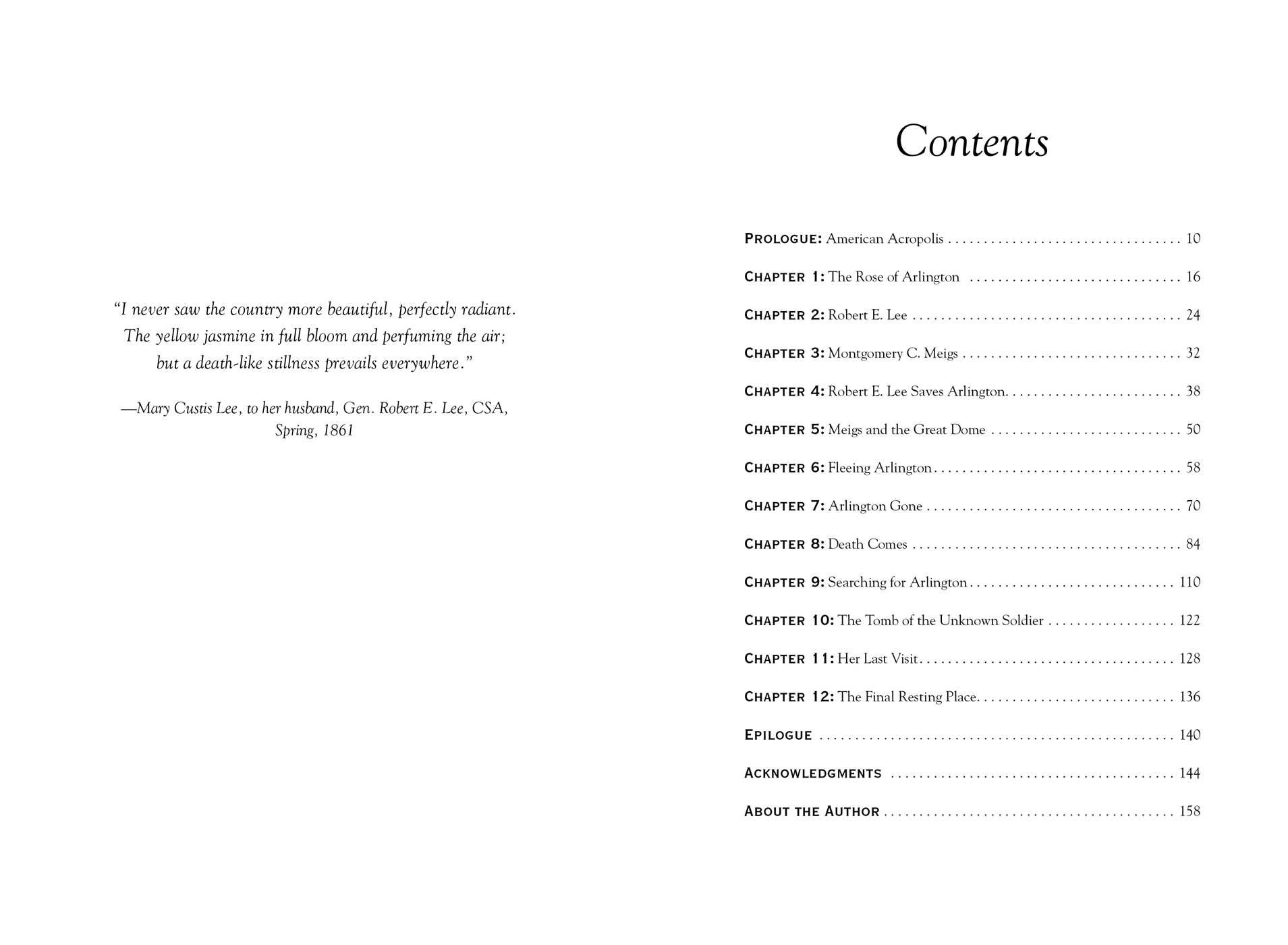 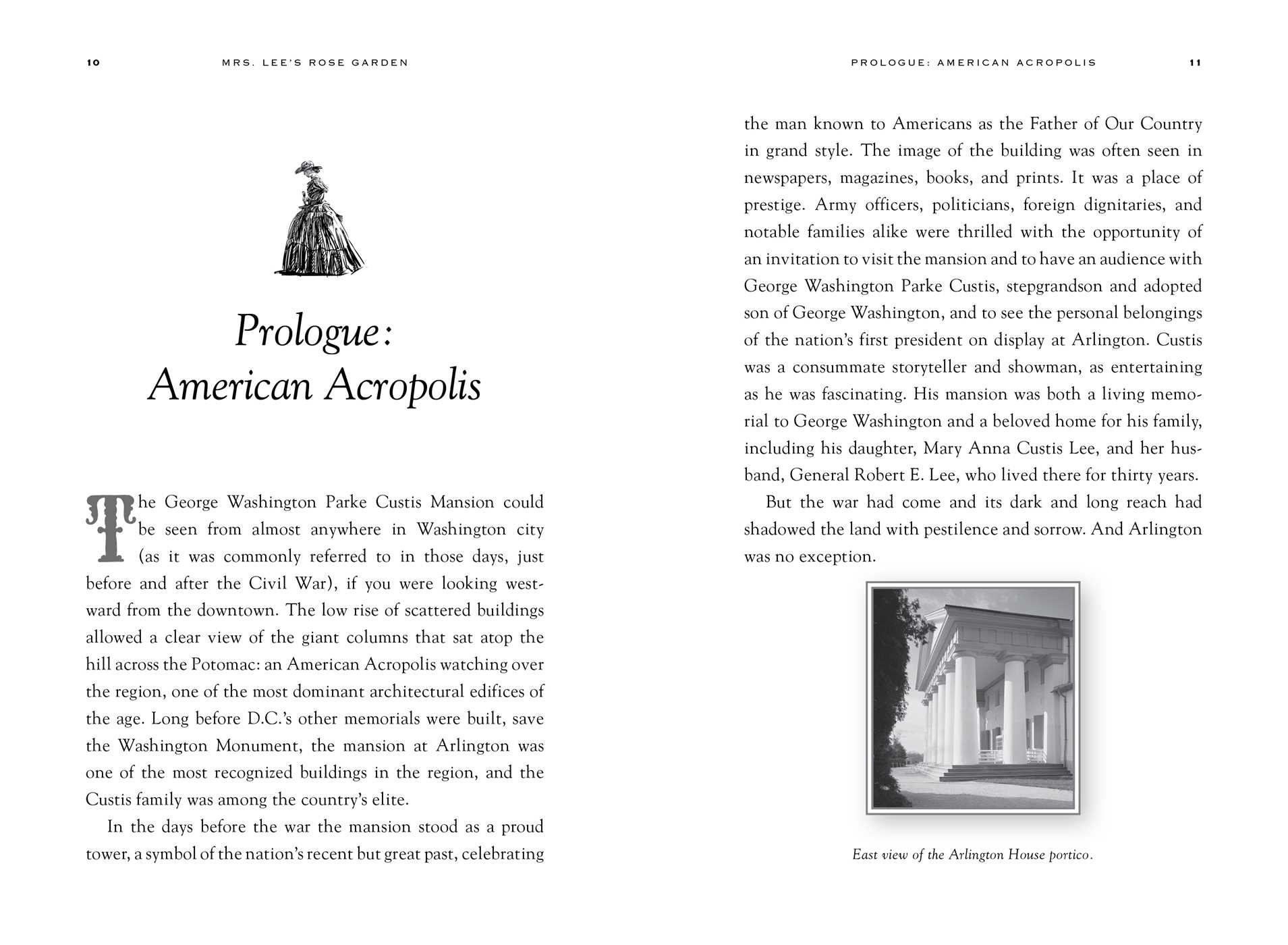 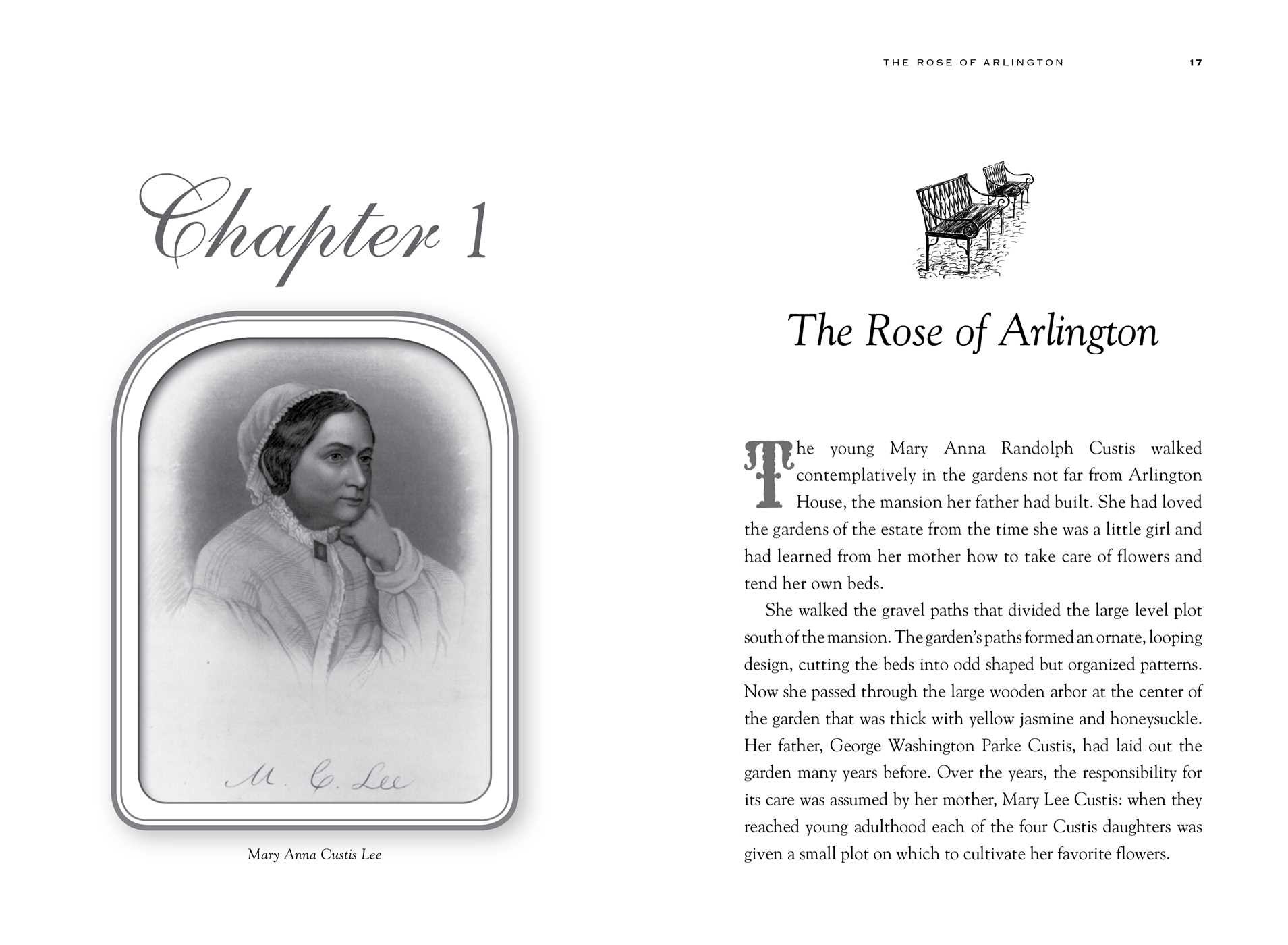 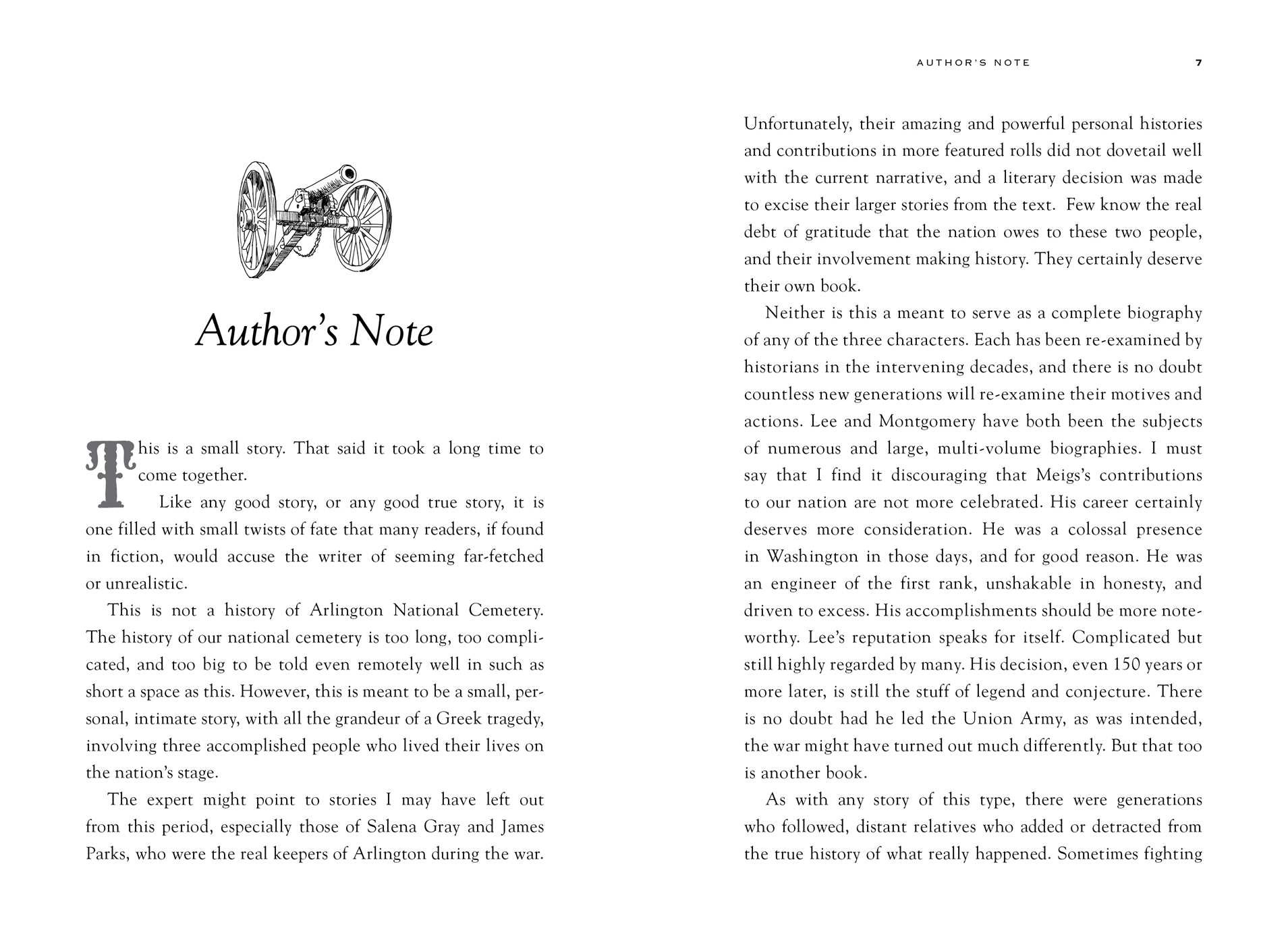 Mrs. Lee’s Rose Garden is the intensely personal story of Arlington National Cemetery’s earliest history as seen through the lives of three people during the outbreak of the Civil War: Mary Ann Randolph Custis Lee, Robert E. Lee, and Montgomery C. Meigs. With all the majesty and pathos of a Greek tragedy, this story unfolds as the war's inevitable spiral of betrayal, tragedy, loss, and death begins, ultimately transforming the nation’s most famous country estate into its most sacred ground.

In the years before the war, the Arlington estate sat like an American Acropolis towering above Washington. Mary Custis Lee was known as the Rose of Arlington, a brash, young, willful, and charming young woman, indulged by her famous father, George Washington Parke Custis, the grandson of George Washington. Artistic, well read, and highly intelligent, she was an avid gardener who spent as much time as possible tending the numerous flowerbeds of the Arlington Mansion, along with her mother and her three daughters.

Handsome and dashing, Robert E. Lee was easily the most promising soldier of his generation. But long before he was a field commander he was also a great success in the Army Corps of Engineers, having worked on major projects around the U.S. His friend, Montgomery C. Meigs, who had served under Robert, was a scion of Philadelphia society, and rose to become the engineer responsible for helping to complete the capital, and one of the most accomplished builders of his generation.

When the time for war arose, Lee refused the opportunity to head the Union Army. He could not draw his sword against his own state, his own people, and instead accepted a commission in the Confederate Army, pitting himself against many of his old comrades. Thus began a series of events that would ultimately pit these three against each other.

“Every place has a biography, none with more tragic twists and turns than Arlington National Cemetery. An old garden, once the delight of Mary Custis Lee, still sits at the heart of the cemetery and is key to the story of its evolution, a tale movingly and deftly told in this splendid new book by Carlo DeVito.”

“In affecting prose, Carlo DeVito skillfully narrates the important and oft-overlooked story of Arlington National Cemetery’s creation during the Civil War. With vivid storytelling and compelling character sketches, he mines the human drama of a conflict that left behind rows of mute, white headstones—not only in Mrs. Lee’s Rose Garden, but in countless other places, too. This is a poignant book.”

"Thousands of people visit Arlington National Cemetery each week, but few have any significant understanding of its connection to famed Civil War General Robert E. Lee. Carlo DeVito has dramatically presented the story of the Federal government's seizure of Lee's private estate and its subsequent transformation into a vast graveyard; a well told tale filled with intrigue, revenge, and controversy."

"Fascinating, well researched and clearly written—the story of the Lee family and Arlington is an important chapter in American history."

– Iain C. Martin, Worthy of Their Esteem: The Timeless Words and Sage Advice of Abraham Lincoln

“This is a short book, but it is filled with the drama of the lives most intimately involved with the mansion and provides a wonderful look at the pre-and-post Civil War era. They come alive as real people faced with their personal and the national dramas.”