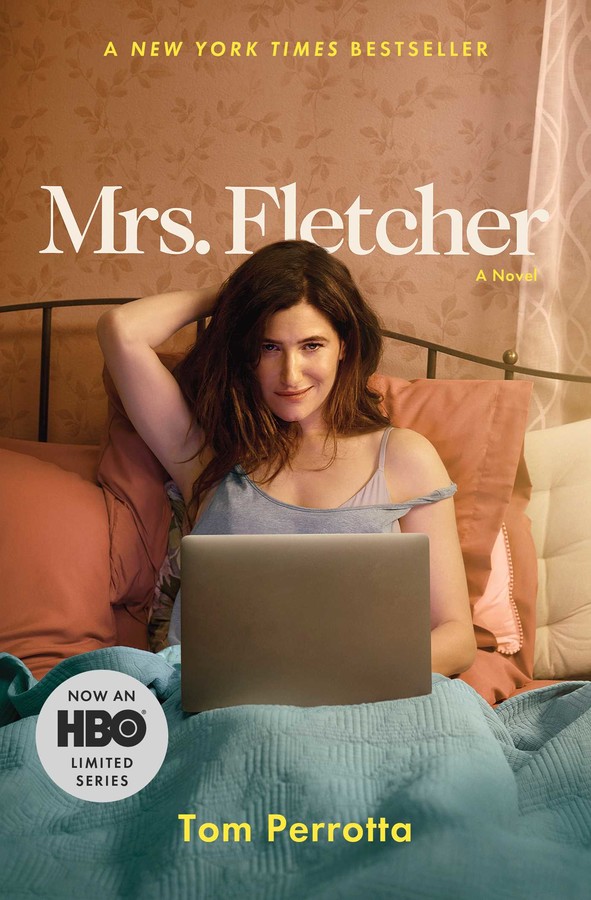 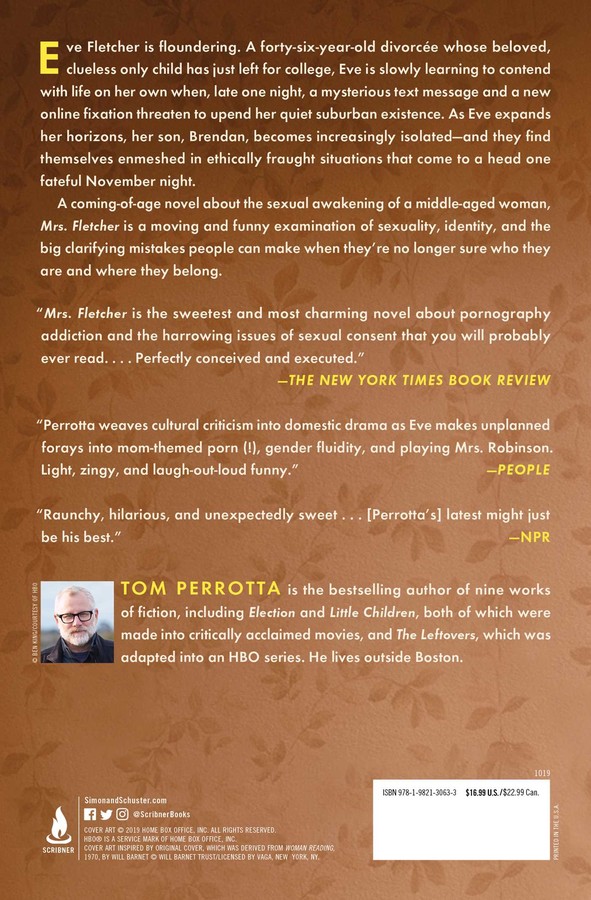 “Light, zingy, and laugh-out-loud funny” (People), the New York Times bestselling novel about sex, love, and identity as seen through the eyes of a middle-aged woman and her college freshman son.

Meanwhile, miles away at the state college, Eve’s son Brendan—a jock and aspiring frat boy—discovers that his new campus isn’t nearly as welcoming to his hard-partying lifestyle as he had imagined. Only a few weeks into his freshman year, Brendan is floundering in a college environment that challenges his white-dude privilege and shames him for his outmoded, chauvinistic ideas of sex. As the New England autumn turns cold, both mother and son find themselves enmeshed in morally fraught situations that come to a head on one fateful November night.

“The sweetest and most charming novel about pornography addiction and the harrowing issues of sexual consent that you will probably ever read” (The New York Times Book Review), Mrs. Fletcher is a timeless examination of sexuality, identity, parenthood, and the big clarifying mistakes people can make when they’re no longer sure of who they are or where they belong. “Tom Perrotta’s latest might just be his best” (NPR).

By clicking 'Sign me up' I acknowledge that I have read and agree to the privacy policy and terms of use. Free ebook offer available to NEW US subscribers only. Offer redeemable at Simon & Schuster's ebook fulfillment partner. Must redeem within 90 days. See full terms and conditions and this month's choices.
This reading group guide for Mrs. Fletcher includes an introduction, discussion questions, and ideas for enhancing your book club. The suggested questions are intended to help your reading group find new and interesting angles and topics for your discussion. We hope that these ideas will enrich your conversation and increase your enjoyment of the book.

Building on the gentle but incisive social satire of Little Children, The Leftovers, and Election, Tom Perrotta’s masterful new work, Mrs. Fletcher, returns the reader to the complicated (and often comical) world of the sexual mores of the American suburbs. When Eve Fletcher’s beloved only child, Brendan, starts college, she’s left all alone and full of questions about how and with whom to live the rest of her life, while miles away Brendan struggles with questions of his own—about how to treat women, understand his relationship with his divorced parents, and grow into a responsible sexual being. As Eve and Brendan separately struggle with their sexualities and self-conceptions, mother and son set out on journeys of discovery that lead them to unexpected places and, after two wild parties, to a dramatic collision.

1. The novel opens with Eve privately lamenting that “big days” (page 3) are never as special as they should be. Are there other “big days,” beyond dropping Brendan off at college, that fail to go the way she hopes?

4. At their dinner out, Eve and Amanda invent names for their alter egos: Ursula and Juniper. Does Eve’s engagement with Amanda, taking a Gender and Society class, and sexual acting out feel like an embrace of this alter ego? Do you think Eve is trying to “find herself,” or is she trying to become someone else?

5. Brendan occupies a position of privilege in the world and on his college campus, yet he can’t seem to adjust to his new environment. Why do you think that is? Is it related to his sense of privilege, or does his discomfort come from elsewhere?

6. How would you describe the relationship between Brendan and Zack at first? What changes? Why do you think Zack distances himself from the friendship?

7. Brendan and Julian are both young, straight, white cisgender men taking college classes, yet they occupy their positions of privilege in very dissimilar ways. What do they have in common, and how are they different?

8. Despite herself, Eve is attracted to Julian and Amanda—both generationally younger and more progressive than she is. What do you think she finds appealing about each of them?

9. Amber uses the Autism Awareness Network to bond with Brendan and to try to engage him politically. What are her plans for him? On page 126, she says, “That’s how we change the world. One person at a time.” Is Amanda trying to “change” Brendan, and if so, does she succeed?

10. Brendan is jealous of his dad’s relationship with Jon-Jon, his autistic half-brother, even though Jon-Jon is fairly low-functioning. When he has a temper tantrum on Parents Weekend, Brendan thinks about “how unfair it was that my father loved him so much and held him so tight—way tighter than he’d ever held me—and wouldn’t let go no matter what” (page 137). Can you empathize with Brendan’s pain, or do you think he is just being selfish?

11. When Amber and Brendan hook up, they have a sexual miscommunication that leads her to regard him as a “huge disappointment” (page 207). What’s Brendan’s role in the situation? What’s Amber’s?

12. By the time Eve, Amanda, and Julian have sex together, each has been fantasizing about the others for weeks or months. When their private fantasies enter the public sphere, what changes?

13. Eve texts Julian a picture of herself, but she won’t go over to his parents’ house to have sex with him. Why does she draw the line there? Do you think her reluctance to fully engage with Julian is about their age difference, or morality, or self-respect, or fear, or something else entirely? As a reader, does their age difference matter to you? And does it involve a different ethical calculation than it would if she were an older man and he a younger woman?

14. Professor Fairchild is an example of a character who, unlike Eve, has undergone a significant and permanent transformation. What do you make of their friendship? What does Eve hope to get from Margo, and Margo from Eve?

15. At the end of the novel, Eve settles back into conventionality, embracing a heterosexual relationship with someone her own age. At their wedding, however, Eve has a moment of doubt: she wonders if it was George, her soon-to-be husband, who sent her the MILF text message all those months ago. Who do you think it was? So much of Mrs. Fletcher is about characters’ hidden fantasies, unknown to all but the reader—except when those fantasies break through into real life, as they do with Eve, Julian, and Amanda. Do you think the characters we know less about have secret selves, secret “Ursulas,” too? Does everyone?

1. Mrs. Fletcher is being developed as an HBO series. Consider watching some of Tom Perrotta’s earlier works that have made the leap to the screen, like The Leftovers, Little Children, and Election and discussing them as a group.

2. Explore your local community college. Do they offer Gender Studies classes or lectures on gender and sexuality? Would you be interested in attending one as a group? 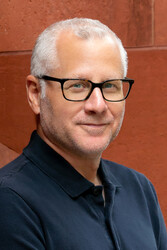 Tom Perrotta is the bestselling author of ten works of fiction, including Election and Little Children, both of which were made into critically acclaimed movies, and The Leftovers and Mrs. Fletcher, which were both adapted into HBO series. He lives outside Boston.

""Mrs. Fletcher," Perrotta’s seventh novel and first since 2011’s "The Leftovers," operates and succeeds in ways that will be pleasingly familiar to his admirers. It uses a fecund premise, a large cast of recognizable characters, a rotating point of view, a propulsive plot, a humane vision and clean, non-ostentatious ... prose to explore a fraught cultural topic. There be dragons, yes, but decency mitigates the danger. “Mrs. Fletcher” is the sweetest and most charming novel about pornography addiction and the harrowing issues of sexual consent that you will probably ever read."
—The New York Times Book Review

"At times morbidly funny and, at others, grim, “Mrs. Fletcher” signals a return to familiar territory for Mr. Perrotta — sex, school and suburbia ... While “Mrs. Fletcher” may sound, from a plot summary, like an R-rated comedy or the outline for a raunchy Judd Apatow movie, it is more melancholy than many of his earlier books. Sex and pornography often serve as shorthand for characters’ loneliness and their search for self-worth."
—The New York Times

"Satisfying, wise and deeply appealing, flying by in a day or two of nonstop immersion, and in Eve's character it has true insight into the strangeness of all those anonymous American suburbs — the simultaneous comfort and loneliness of a generic place, a common life."
—The Chicago Tribune

"Sublimely funny ... in this shimmeringly satisfying novel, Perrotta uses the sense of loneliness like a propeller, raising these characters into glorious flight if they can just let themselves trust they have wings."
—San Francisco Chronicle

"Raunchy, hilarious, and unexpectedly sweet ... [Perrotta's] latest might just be his best — it's a stunning and audacious book, and Perrotta never lets his characters take the easy way out. Uncompromisingly obscene but somehow still kind-hearted, Mrs. Fletcher is one for the ages."
—NPR

"The sinews of Perrotta’s fiction, rather, are the tensions within and between characters, tensions that he steadily and artfully amplifies until the reader becomes possessed by curiosity about how they’ll be resolved ... "Mrs. Fletcher" is lit up by flashes of acute observation."
—The New Yorker

"[A] fantastic tease ... [Perrotta] knows how to capture the hilarious contradictions of teenagers."
—The Washington Post

"Perrotta has been called the “Steinbeck of suburbia” and an “American Chekhov,” but with Mrs. Fletcher, he’s become the Jane Austen of 21st century sexual mores ... [Mrs. Fletcher is] a delicious, tragicomic and finally forgiving take on the mistakes we modern people can’t seem to stop making. Mrs. Fletcher is a delight."
—Newsday

"Sublimely funny ... shimmeringly satisfying ... Perrotta is astute about complex social problems, including how well a mother and grown son can understand one another, what it means to be transgender and lonely, what our sexual mores really mean, and how anyone different — whether autistic or sexually fluid — can find a comfortable place in a confusing world."
—San Antonio Express-News

"Mrs. Fletcher is an intelligent novel that weaves together all the old issues about relationships along with contemporary issues of identity ... Perrotta expertly explores sexual identity, gender, pornography, and sex. This is a novel about overcoming ignorance. It urges readers to take advantage of opportunities for self-analysis and enlightenment. We must listen to each other’s stories."
—Los Angeles Review of Books

“From the thrill of learning of its existence, to the feverish turning of pages, to the contemplative afterglow that comes from having finished: there’s nothing like a new Tom Perrotta novel. Mrs. Fletcher is all you dream it will be: hilarious, provocative (a little too), relatable, and every moment a joy ride.”
—Maria Semple, bestselling author of Where’d You Go, Bernadette and Today Will Be Different

“Tom Perrotta has always been a smart, fearless writer, a wet-your-pants-funny satirist who will in the very next sentence ambush you with genuine emotion. Buckle your seat belt and surrender your dignity, because Mrs. Fletcher is a romp.”
—Richard Russo, Pulitzer Prize–winning author of Empire Falls