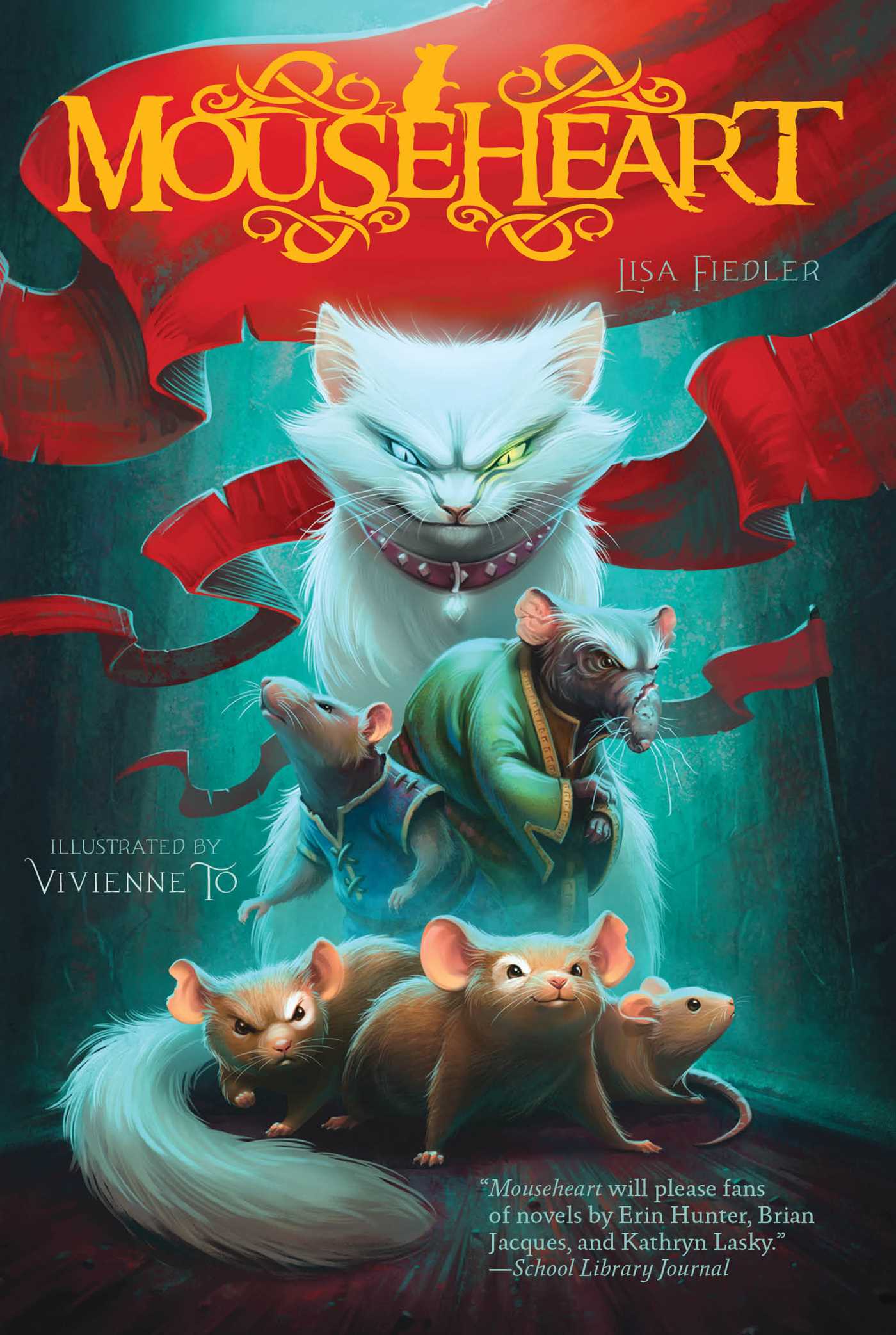 Book #1 of Mouseheart
By Lisa Fiedler
Illustrated by Vivienne To
LIST PRICE $8.99
PRICE MAY VARY BY RETAILER

The Warriors series meets Redwall in this first book in an epic animal adventure series set in the subway tunnels of Brooklyn and for “fans of Erin Hunter, Brian Jaques, and Kathryn Lasky” (School Library Journal).

Hopper is just an ordinary pet shop mouse before he escapes. Soon he finds himself below the bustling streets of Brooklyn, deep within the untamed tangles of transit tunnels, and in Atlantia, a glorious utopian rat civilization.

But all is not what it seems. Though Hopper is treated as a royal guest, he misses his siblings that he lost in the escape attempt. That, and Atlantia is constantly threatened by the rebels who wish to bring the city to its knees. And there are cats everywhere in Atlantia, cats that leave the citizens unharmed… and no one can seem to answer why.

Soon, Hopper is caught in the crosshairs of a colossal battle, one that crosses generations and species. As the clashes rage, Hopper learns terrible, extraordinary secrets: Deadly secrets about Atlantia. Painful secrets about his friends.

And one powerful secret about his destiny…

chapter one
THE CAGE LID CLOSED with a hollow clang.

It was followed by the metallic zip of the lock sliding into place.

Hopper pressed his soft muzzle to the bars. The shopkeeper had just filled their bowl with a meal of pellets and lined the cage with a fresh sprinkle of aspen shavings and a handful of shredded paper; now the space was clean and almost cozy. Hopper listened as his brother, Pup, burrowed happily into the crisp, new wood curls. Pinkie, their sister, found no such comfort as she clawed at the shiny metal clasp that held the cage lid in place.

Pinkie clawed whenever she could. Pinkie was like that.

“Closing time,” Keep muttered, humming off-key as he went about his chores. Hopper watched sleepily as beyond the big window, Brooklyn had begun to fade into twilight and shadows.

The other mice who shared their cage were already piled into a white-and-brown heap in the corner. Young, and new to the shop, they tired easily. In seconds Hopper could hear the gentle snuffles and sighs of their collective slumber.

This was Keep’s end-of-the-day litany—checks and reminders and grumbled complaints about ill-smelling feed and dirty cage bottoms. Hopper knew the routine by heart, but he took little joy in the familiarity of it. He hated the darkling hours.

Their mother had disappeared at dusk.

Now Keep returned to the mouse cage. He gave the clasp a tug to see that it was secure.

Lucky for Keep, he pulled his chubby thumb away just before Pinkie could sink her teeth into it.

And that was the last of it. Hopper knew all that remained was for Keep to turn the sign from OPEN to CLOSED. This would inform the patrons on the other side of the big window that there would be no more adoptions today; it was time for the animals to rest. Keep would take his leave, sweeping a chill blast of air into the shop as he opened the door. The bell on the handle would jangle fitfully as the door swung wide; then it would close with a loud, metallic clack as Keep locked it with his key. After that, the shop would fall silent but for the bubbling of the aquariums and the sleepy chirping sounds of animals dreaming of a far-off future in a place called home.

But not Hopper. He only ever dreamed one dream. And it was not so much a dream but a memory of his mother on the last day he had ever seen her. It was vague and hazy, but buried deep inside it was the image of her lovely brown face and her twinkling eyes, filled with love.

In the memory Hopper and Pinkie and Pup had been no larger than pebbles, pressed against their mother’s warm, silken fur. The sun outside the big window had been setting when Keep had approached the cage. And something in Hopper’s mother’s eyes had turned to ice.

She knew. Somehow she knew.

Pinkie had been curled around Pup, sound asleep.

His mother’s heartbeat against him, her eyes glittering with tears as they’d darted back and forth between Hopper and Keep. “Find the Mews,” she’d whispered. Her voice, ordinarily sweet and calm and wise, had been frantic. “Find the Mews, Hopper. You must.”

But Keep had had her by the tail, and in the next moment Hopper’s mother had been dangling above him, her arms stretching out to him desperately.

Hopper had heard her utter a word that might have been “below.” But he had been too terrified to comprehend. Then she was gone.

He had watched from sun to sun, seeing the light change the sky outside the big glass, but his mother had not come back.

When at last Pinkie had been certain that their mother was lost to them forever, she had turned on him.

“You didn’t do anything to stop it!” she had seethed.

“What could I have done?” he’d asked in a small voice.

The disdain in her eyes, the scorn in her voice, had caused Hopper to burrow into the aspen shavings in shame.

Pup had come and cuddled beside him. Pup had been even tinier then . . . so delicate and fragile. His ears had been smaller and pinker than Hopper’s, nearly transparent.

Hopper had nodded, but there was a lump in his throat. “Yes, Pup. That’s probably it.”

“So we should be happy for her, then.”

Hopper had smiled at his brother but hadn’t replied. He had seen his mother’s eyes when Keep pinched her tail and jerked her out of their cage. She had not been adopted, brought to a better life. She had been violently stolen. Hopper knew it in his gut. Find the Mews. The phrase haunted him as much as the image did. He still couldn’t be certain that’s what she’d said as she’d bobbed above him, her paws reaching for her babies even as the hand pulled her from their lives. But he would never forget the tone of her voice. It was a promise, a warning, a plea . . .

Sometimes in the memory Hopper could almost feel the warmth she’d left behind in the nest of paper and wood. She was there and she was gone. And in the dream he could do nothing but watch her go.

And always Hopper would awaken with his eyes damp and his heart aching.

Hopper closed his eyes and listened, first for the whine of the money machine being put to bed, then for the bell on the door that would signal Keep’s departure.

But the sounds didn’t come.

Still no machine. Still no bell.

He opened his eyes, his pink nose twitching with awareness. What was Keep waiting for?

Suddenly Keep’s booted feet stomped across the shop to the counter, and he angrily muttered something under his breath.

Curious, Hopper peered through the bars, but all he saw was his own reflection in the glass tank next to his cage.

Same old Hopper: small and brown, with a white ring around his right eye; slender paws and long, smooth tail, tapered to a point at the end like a whip. Bright black eyes, and dainty, oval ears, flickering now as he listened to Keep’s movements.

Coins rattled as the money drawer banged open, then closed again. The machine let out one last long beep and the shop went still.

But then the door flung wide—the bell jingled madly as the shop was assaulted with a rush of cold wind. A lanky boy wearing a snug woolen cap and a black jacket stood in the doorway. His face was thin and pale, and his eyes narrowed as he locked his gaze on Keep.

Worst of all was the long, slithering horrible thing he carried, draped around his neck.

Hopper’s heart thudded and his blood went cold as one word and one word only trembled on his tongue.

Lisa Fiedler is the author of many novels for children and young adults. She divides her time between Connecticut and the Rhode Island seashore, where she lives happily with her very patient husband, her brilliant and beloved daughter, and their two incredibly spoiled golden retrievers.

“Sword-wielding rats, feline palace guards, and rebel mice fill this adventure with imagination and heart…. For those who love an underdog and some romping good battles, Fiedler thoroughly entertains.”

"Captivating and cunning, Mouseheart is the next great adventure. Mouseheart is the first in the series which promises to deliver grand adventure and great storytelling. Hopper is one little mouse who roars! Readers who loved Jacques' Redwall series and Hunter's Warrior series will love this new series."

"The underground world and mix of intrigue, prophecy, and betrayal bring to mind Suzanne Collins’ Gregor the Overlander series....Fans of Brian Jacques’ Redwall Abbey series may enjoy this modern adaptation of rodent politics and warfare."

Book #1 of Mouseheart
By Lisa Fiedler
Illustrated by Vivienne To
LIST PRICE $8.99
PRICE MAY VARY BY RETAILER

More books in this series: Mouseheart