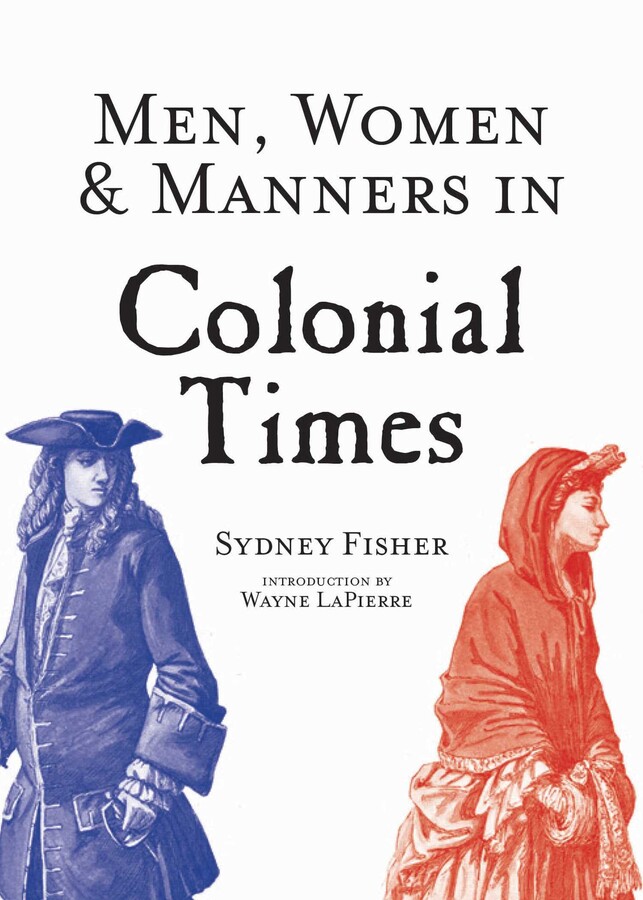 In travelling from Massachusetts to the Carolinas one passed through communities of such distinct individuality that they were almost like different nations,” writes author Sidney George Fisher in his preface to Men, Women & Manners in Colonial Times, in which he presented the history and culture of colonial America to his Gilded Age contemporaries, who he felt had lost an appreciation of the fascinating circumstances that created the Founding Fathers and the Revolution. In the almost two hundred years of colonial life preceding the Revolution, the colonies displayed a remarkable variety, from their religion, politics, and countries of origin, to their dress, lifestyles, and character. Fisher cites primary documents such as colonial newspapers and the diaries of common men and women as well as famous political figures. He addresses the credibility of legends of our forefathers still told today (George Washington was an extremely sociable man, and he could not have lived in Virginia and been otherwise”) and the riveting colonial folklore lost to the ages (for instance, John Randolph, of Virginia, who, seeing a drove of mules passing through Washington on their way to the South, said to Marcy, of Connecticut, There go some of your constituents.’ Yes,’ said Marcy, going to Virginia to teach school.’ ”).

Discover colonial architecture, illustrated here with photogravures, and colonial pastimes, including the favorites of George Washington and much of colonial Virginia: card playing and foxhunting. Learn the outstanding literary tradition of Massachusetts, the regularity of fighting off bears in New Hampshire, the popularity of horseracing in Maryland, Blackbeard’s headquarters in North Carolina, the women who ran the South Carolina plantations, the cleanliness of the New York Dutch as they contemplated their comfort and prosperity while they smoked their pipes . . . willing that the rest of the world would enjoy the same pleasure.”