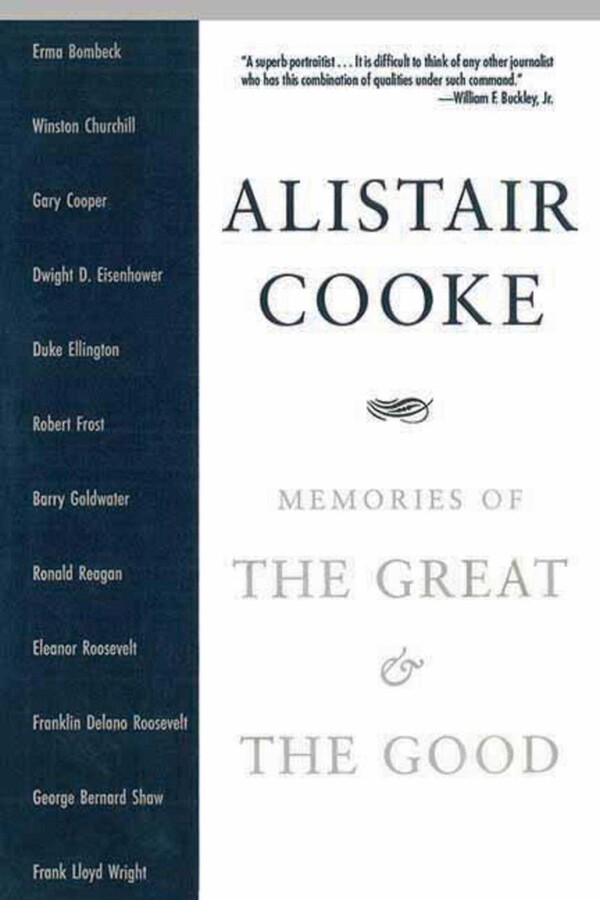 Memories of the Great and the Good

By Alistair Cooke
LIST PRICE $14.95
PRICE MAY VARY BY RETAILER

Over the course of his distinguished career as a foreign correspondent, which spanned more than sixty years, Alistair Cooke had known, interviewed, or reported on literally hundreds of the most influential men and women of the twentieth century. Here he has collected his memories of more than a score of them: they include actors and generals, statesmen and eccentrics, a poet, a jazzman, an intensely scholarly woman and a casually funny one, an architect, a publisher, and several politicians—all of whom, in Cooke's view, have left the world a better or more interesting place.
Here, then, are scintillating portraits of characters as far apart as George Bernard Shaw and Duke Ellington, as different as the humorist Erma Bombeck and the Nobel Prize winner Barbara McClintock. Recounting the trials of Sir Francis Chichester, the lonely global yachtsman, or analyzing the very different but equally indomitable spirit of First Lady Eleanor Roosevelt, Alistair Cooke allows us to understand a little better the nature of courage. His fond and sensitive recollections of P. G. Wodehouse and Gary Cooper salute two unpretentious geniuses in the ostentatious world of entertainment. His account of his long and relaxed weekend with President Dwight Eisenhower is sensitive and revealing, as is his candid but compassionate portrait of an earlier president, Franklin D. Roosevelt. His meeting with Ronald Reagan during the future president's early years as governor of California is as insightful as it is prescient. The book ends with moving and memorable portraits of two men Cooke especially admires, for different reasons: one, Winston Churchill, who for all his human flaws was "most certainly great," and the other, Bobby Jones, whom Cooke regards as "one of the three or four finest human beings I've ever known."

Alistair Cooke was a journalist born in Lancashire, England, on November 20, 1908. For over fifty years, he presented Letters from America, which was the longest-running radio series in the world. Cooke lived in New York City until his death on March 30, 2004.

Memories of the Great and the Good

By Alistair Cooke
LIST PRICE $14.95
PRICE MAY VARY BY RETAILER