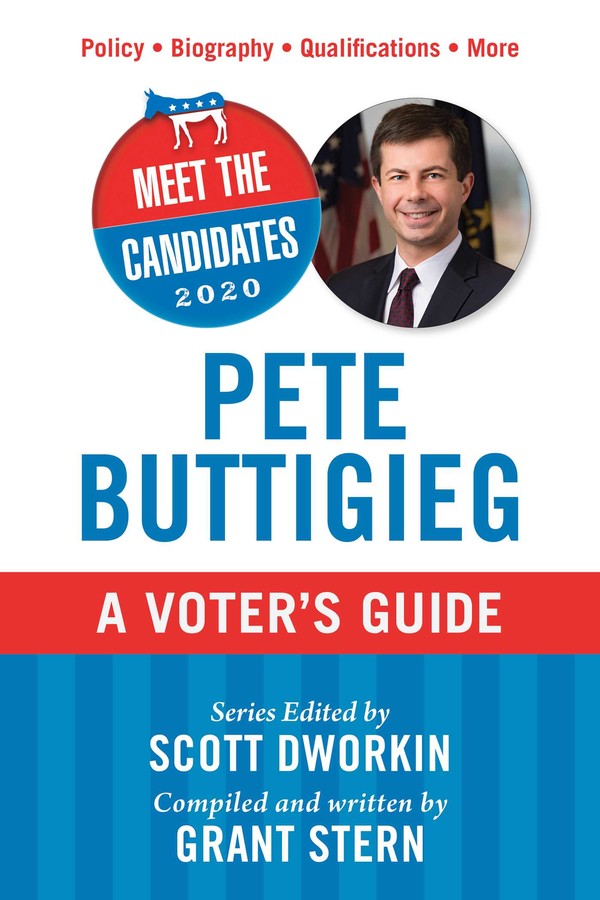 Part of Meet the Candidates
Compiled by Grant Stern / Edited by Scott Dworkin
LIST PRICE $7.99
PRICE MAY VARY BY RETAILER

Who is Pete Buttigieg? The mayor of South Bend, Indiana emerged from relative obscurity to become a serious contender for president of the United States of America. Is he the right foil for Donald Trump?

Mayor Pete Buttigieg has raised seven million dollars and captivated the nation in media and at town halls during his short time as candidate for president of the United States. He’s a veteran of the war in Afghanistan as a lieutenant in the Navy Reserve, a Harvard graduate and Rhodes scholar, well-liked by his South Bend constituents, and now a bestselling author with his recent book, Shortest Way Home. He’s also a 37-year old millennial and openly gay—no president has ever been either.

Meet the Candidates 2020: Pete Buttigieg: A Voter’s Guide is your handbook to understanding the man that Barack Obama christened the future of the Democratic Party. Buttigieg transcends expected labels: millennial and media savvy, but conversational or better in eight languages; a Harvard grad and corporate consultant who settled in the small town he grew up in; a progressive but not a revolutionary. From his revered decency to his standard progressive stances on the issues of the environment, gun control, LGBTQ rights, and immigration, this guide is your primer on Mayor Pete.

The Meet the Candidates 2020 series is the informed voter’s guide to making a decision in the 2020 Democratic primary and presidential election. Each book gives an unbiased, political insider’s analysis of each contender, featuring: candidate interviews; an introduction by campaign adviser, Democratic Coalition co-founder, and Dworkin Report host Scott Dworkin; and compilation and writing by Occupy Democrats Editor at Large Grant Stern. In two hours of reading, you’ll understand their defining characteristics, credentials, campaign issues, challenges, presidential chances, and everything else you need to know to decide who should challenge Donald Trump. Whether it’s for Elizabeth Warren, Joe Biden, Bernie Sanders, Kamala Harris, Julian Castro, Cory Booker, or another, Meet the Candidates is what you need to make an informed vote for president in 2020.

Part of Meet the Candidates
Compiled by Grant Stern / Edited by Scott Dworkin
LIST PRICE $7.99
PRICE MAY VARY BY RETAILER