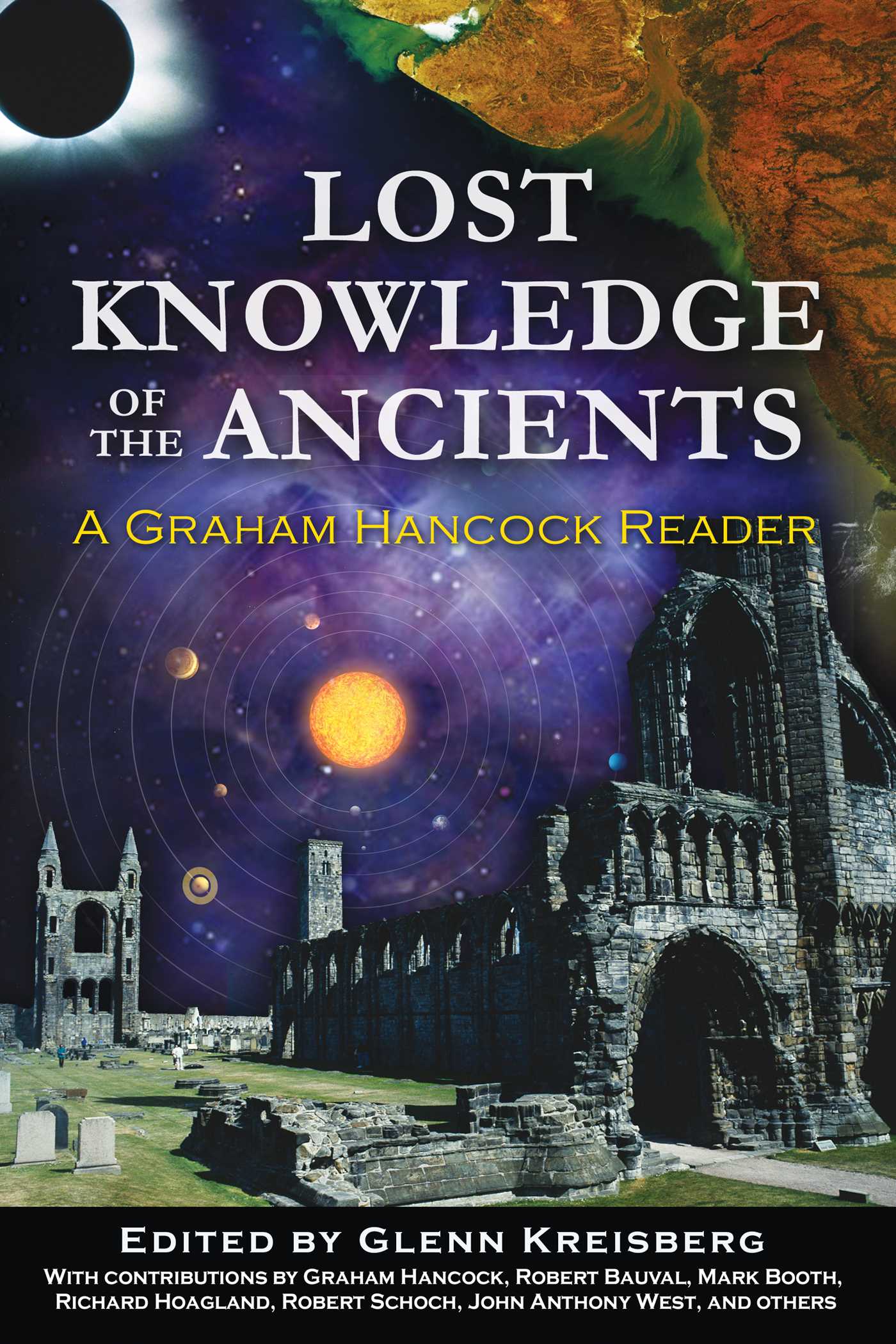 Lost Knowledge of the Ancients

Thinkers at the forefront in alternative theories on history, the origins of civilization, technology, and consciousness

A revolution of thought is under way in our world, fostered by decades of research and well-documented evidence by alternative theory pioneers such as Graham Hancock, John Anthony West, Robert Bauval, and Robert Schoch. These provocative, cutting-edge scholars now represent a direct challenge to the academic establishment as the paradigms of science and history shift and their ideas gain acceptance.

Representing the latest, often controversial findings in scientific and historical research, this anthology of essays commissioned by Graham Hancock, bestselling author of Fingerprints of the Gods, covers the forefront in alternative theories on history, the origins of civilization, technology, and consciousness with topics ranging from quantum philosophy and paranormal phenomena to the ancient use of electromagnetism, the effect of cosmic rays on human evolution, and NASA’s cover-up of ancient Martian civilizations. Recognizing that many recent discoveries are actually rediscoveries of lost knowledge from past civilizations, these authors seek to understand where, within the bigger picture of human knowledge, our present time fits into the cycle of human existence.

My name is Richard C. Hoagland. I was a National Aeronautics and Space Administration (NASA) consultant to the Goddard Spaceflight Center in the post-Apollo era and science advisor to Walter Cronkite and CBS News Special Events, advising CBS on the science of the NASA missions to the moon and Mars during the Apollo Program. I currently run the Enterprise Mission, an independent NASA watchdog and research group, which is attempting to figure out how much of what NASA has found in the solar system over the past fifty years has actually been silently filed out of sight as classified material, and therefore remains totally unknown to the American people.

To even begin to fully appreciate what NASA has been quite consciously, deliberately, and methodically concealing from the American people and the world for all these years, you have to begin with NASA’s turbulent past--specifically, an account of its origins in the increasingly dangerous geopolitical environment that Americans were thrust into in the wake of World War II.

The governmental institution known as NASA is a department of the executive branch, ultimately answerable solely to the president of the United States, an agency created through the National Aeronautics and Space Act of 1958. According to that act, NASA is, ostensibly, “a civilian agency exercising control over aeronautical and space activities sponsored by the United States.” [Emphasis added.]

However, contrary to common public and media perception that NASA is an open, strictly civilian scientific institution is the legal fact that the space agency was quietly founded as a direct adjunct to the Department of Defense, tasked with specifically assisting the national security of the United States in the midst of a deepening Cold War with its major geopolitical adversary, the Soviet Union. It says so right in the original NASA charter:

In another section of the act, this seldom-discussed defense responsibility--the ultimate undercutting of NASA’s continuing public facade as a strictly civilian, scientific agency--is blatantly spelled out:

Sec. 205 . . . (d) No [NASA] information which has been classified for reasons of national security shall be included in any report made under this section [of the act] . . .


Clearly, from this and the other security provisions incorporated in the act, what Congress, the press, and the American taxpayers get to see of NASA’s ultimate activities--including untouched images and data regarding what’s really on the moon, on Mars, or anywhere else across the solar system--is totally dependent on whether the president of the United States (and/or his legal surrogates in the Department of Defense and the “intelligence community”) has already secretly classified that data. This is directly contrary to everything we’ve been led to believe regarding NASA for more than fifty years now.

After NASA was formed, it commissioned a formal “futures study” into the projected effects on American society of its many planned activities (including covert ones). Carried out as a formal NASA contract to the Brookings Institution--a well-known Washington, DC-based think tank--the 1959 study was officially titled “Proposed Studies on the Implications of Peaceful Space Activities for Human Affairs.” The results of this multidisciplinary investigation were officially submitted to the administrator of NASA in late 1960 and (after the Kennedy administration was elected) to Congress in April 1961. One area of unusual interest covered in the report--easily overlooked amid mountains of interminable statistics and analyses--was a quiet assessment of the near-certainty of a NASA discovery of intelligent extraterrestrial life:

While face-to-face meetings with it [extra-terrestrial life] will not occur within the next twenty years (unless its technology is more advanced than ours, qualifying it to visit Earth), artifacts left at some point in time by these life-forms might possibly be discovered through our [NASA’s] space activities on the moon, Mars, or Venus.

Brookings officially affirmed NASA’s expectations that the agency would fly to nearby planets in the solar system and would thus be physically capable, for the first time, of confronting “extraterrestrials” right in their backyard.

Did any skeptics even know that this official document existed before we made it public in 1996? Beginning in the mid-1960s with unmanned spacecraft, NASA actually discovered its projected extraterrestrial artifacts--but the agency never got around to telling the rest of us!

NASA would clandestinely confirm with these earliest robotic probes, and then proceed to cover up, the first awesome remains of an extraordinary, solar-system-wide, ancient technological civilization on the moon--precisely as Brookings had predicted. Four years later, the Apollo Program would come to full fruition, and the lunar astronauts themselves would personally witness and extensively document, with tens of thousands of high-quality photographs, from both lunar orbit and the surface, extraordinary “glass-like” structures on the moon! The Apollo crews would not only bring back rocks to NASA laboratories but also actual samples of the ancient technologies they found--for highly classified efforts at “back engineering.”

A small cadre of loyal NASA employees was witness to what actually went on and agreed at that time to keep the secret in the interest of national security. Some of these NASA employees, apparently, have finally “seen the light”--that this continued deception, no matter what the legal rationale or national security implications, was fundamentally extra-Constitutional. Because of these true NASA heroes, real space history is about to officially begin, again.

“This incredible anthology introduces the revolutionary work of cutting-edge researchers who are currently defining a new view of not only the high level of science and technology in the remote past but also the relationship of humanity to cosmic cycles over vast expanses of time. Lost Knowledge of the Ancients may hold the key to our future.”

“These accounts of ‘lost’ or anomalous knowledge are building blocks of an alternative universe, and, taken altogether, they reveal something of the deep structure of this alternative universe. They also show that this universe made up of anomalies may be more real than the everyday, commonsensical one!”

– Mark Booth, author of The Secret History of the World

"Altogether, the reflections of these frontier investigators provide a big-picture perspective on the cycle of human existence which challenges orthodox knowledge. If you've not read their works before, this anthology is an ideal place to start."

"Fascinating! That's how I found the theories in Lost Knowledge of the Ancients."

“The face of archaeology has been irrevocably changed . . . This volume brings together a series of essays which explores many aspects of this new domain with papers covering diverse. . .”

Lost Knowledge of the Ancients