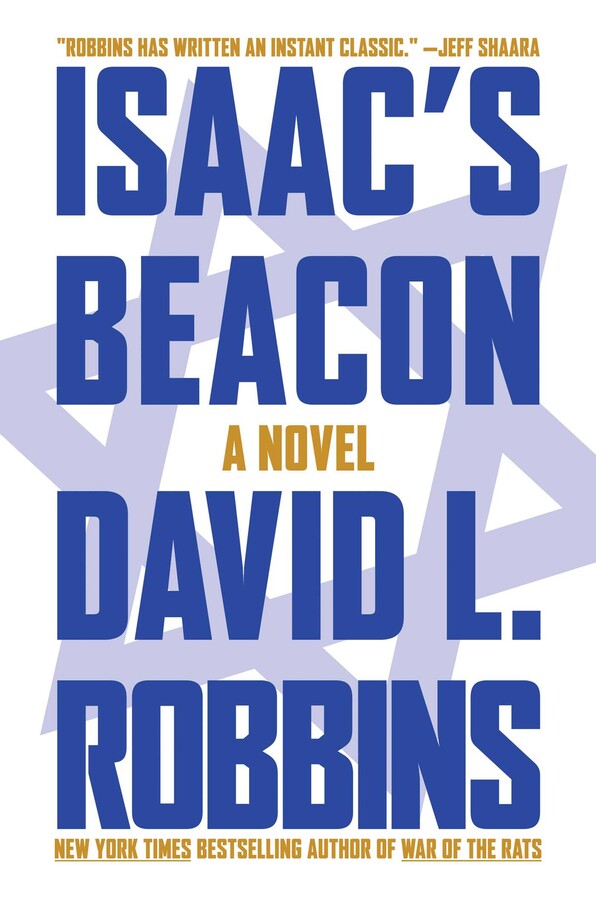 In the tradition of epic novels like Exodus and Cast a Giant Shadow, Isaac’s Beacon is a sweeping historical tale based on the real events of Israel’s founding—bringing alive the power and complexities of the birth of the Jewish state out of the ashes of the Holocaust.

Bestselling author David L. Robbins, called “the Homer of World War II,” turns his mastery of the historical novel to another defining moment of the twentieth century: the birth of the state of Israel.

Isaac’s Beacon is a small, vulnerable kibbutz on the edge of the Negev. Here, the lives of three memorable characters—an Irgun fighter, a young woman farmer, and an American journalist—collide to shape an epic narrative of love, loss, violence, and courage.

Deeply researched and closely based on actual events, Isaac’s Beacon is the first in a series of Robbins’s novels which will explore the tumultuous, complex history and lasting impact of Israel’s creation.

New York Times bestselling author David L. Robbins has published fifteen novels. He is also an award-winning playwright, screenwriter, and essayist. The Virginia Commission for the Arts has named David one of Virginia’s the two “Most Influential Literary Artists” for the last fifty years.

"David L. Robbins takes us from Hitler's camps through the British Mandate in Palestine, onto a rocky kibbutz, and into the dangerous Irgun. A profound and pivotal novel of the birth of the State of Israel, with all its adventures and tragedies on display. This is Robbins—historian, humanist, and master novelist—at the top of his game. An epic and timeless work."

"Isaac's Beacon stands alongside the great fiction epics of Israel by Leon Uris and Herman Wouk. Robbins has written an instant classic."

"Robbins has written his most ambitious book yet. A beautifully paced and utterly gripping powerhouse of a book. Extremely timely."

"Isaac's Beacon is a masterwork by a truly masterful writer."

– Tom Robbins, New York Times Bestselling Author of "Even Cowgirls Get The Blues" and "Still Life With Woodpecker"

"The best historical novels not only illuminate the past, they define it. Isaac's Beacon is one of those novels. Riveting, morally complex, fiercely intelligent, and as empathetic as it is sweeping in scope, Robbins guides readers through war-torn chaos to moments of rare, magnificent beauty. I feel like a better person for having read it."

– Dan Mayland, author of "The Doctor of Aleppo"

“A sweeping historical epic based on the actual events of Israel’s founding, with complex, flawed protagonists forced to find their way amidst the challenges and struggles of pre-state Israel’s most tumultuous years...portrayed with careful adherence to historical accuracy, a sign of the author’s meticulous research. Isaac’s Beacon relates the tale of Israel’s birth in bitterness and battle without sparing the reader any of the blood, sweat, and tears of the brave fighters who made it possible.”

– The Times of Israel

"Robbins’ telling makes effective use of real events. The narrative not only incorporates detailed accounts (of the formation of Israel), but also deeply explores the motivations of the many people involved in them.  As the main players fight, bleed, and try to make sense of the world, the narrative successfully carries readers right along with them. A lively work that explores a transformative time in a tumultuous place."

“The multilayered epic includes a wealth of intelligently conceived and richly realized characters. Robbins’ prodigious research infuses their stories—and the entire novel—with impressive authenticity. Insightful and intense, this stirring narrative of courage and cruelty, resolve and romance, also marks the birth of what is likely to be Robbins’ magnum opus. An addictive adventure story.”