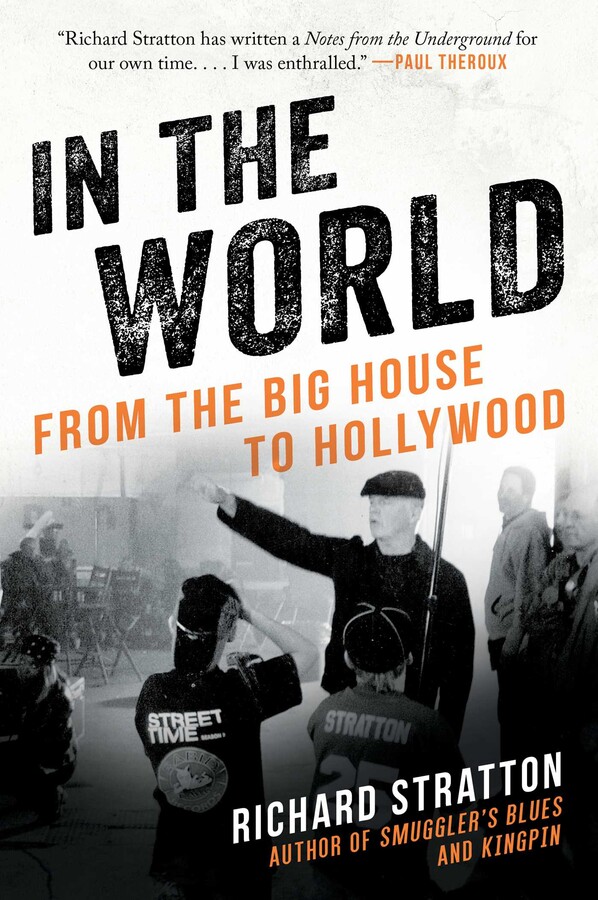 From the Big House to Hollywood (Cannabis Americana: Remembrance of the War on Plants, Book 3)

Book #3 of Cannabis Americana: Remembrance of the W
By Richard Stratton
Published by Arcade
Distributed by Simon & Schuster
LIST PRICE $16.99
PRICE MAY VARY BY RETAILER

The Hollywood Ending of an Adrenaline-Filled and, By Turns, Harrowing and Funny Odyssey of Crime and Redemption in America's War on Drugs
Smuggler's Blues, the first book in Richard Stratton's memoir of his criminal career, detailed his years as a kingpin in the Hippie Mafia. Kingpin, the second book, traced his eight-year journey through the criminal justice system, through two federal trials and myriad jails and prisons, and culminating in his success as a self-taught jailhouse lawyer in winning his own release. In this final volume, Stratton recounts his return to civilian life, as a convicted felon who had been forced to confront his demons and an aspiring writer who yearned to make his mark.

From parole to Hollywood to marriage and fatherhood, he found his way in the free world. Working in the New York office of a criminal defense attorney, he somehow adhered to the stringent conditions of his release not to associate with other felons. When his prison novel Smack Goddess was published, his mentor, Norman Mailer, entered his life again. Going to Hollywood to consult on a documentary, he became a writer and producer, and his feature film Slam won major awards at Sundance and Cannes. In the World includes profiles of celebrities such as Mailer, Oliver Stone, Sean Penn, and others.

Richard Stratton is also the author of the cult classic novel Smack Goddess and an award-winning journalist and filmmaker. He was a writer and consultant for HBO’s Oz and the creator, writer, and executive producer of Showtime’s Street Time. He is a court-certified expert on prison culture, prison violence, and international drug trafficking. As a journalist, he won a New York Press Club award for his magazine article “Godfather and Son.” He was the founder of the magazine Prison Life and an editor and publisher of High Times. He lives with his wife and children in New York City.

"This fascinating memoir is sure to appeal to true crime fans. . . . Stratton details the struggles of reinventing himself in his forties, facing the capricious restrictions of parole, and finding love and work. But, despite his criminal past, Stratton was no typical ex-con. . . .  Stratton peppers the text with government conspiracy theories as well as his views on America’s war on drugs and on prison violence. . . Engrossing, polished,"—Publishers Weekly, starred review

“Richard Stratton has written a Notes from the Underground for our own time—post-prison blues, a litany of drugs, mobster capers, and most sinister of all, the hell of Hollywood. I was enthralled.”—Paul Theroux

“In a clear, insightful, and candid voice, Richard Stratton gives the reader a uniquely front-row seat to the odyssey of a man’s re-entry from America’s prison system to a society of increasing intolerance to rugged individualism, as he struggles to keep the dueling demons of his own outlaw nature at bay while navigating the hard-wired treachery of a wrong-minded parole system. If, as Norman Mailer is quoted as saying, ‘the writing is its own reward,’ the reward here is a two-way street. A salvation for both writer and reader. Great reading.”—Sean Penn

“With In the World, Stratton provides an inspiring, redemptive coda to a memoir trilogy that is as compelling and entertaining as any true-life crime saga you will ever read. By becoming a writer and filmmaker, with its many ups and downs and hustling not unlike his previous life as a drug kingpin, Stratton finds his place in the world. His adventures as a criminal (Smuggler’s Blues) and inmate (Kingpin) lay the groundwork for In the World, the story of how one man turned his life around and became the artist he always hoped he could be. Get this book, read it, and pass it on to a friend.”—T. J. English, author of The Corporation and Havana Nocturne

“I've written about wiseguys, gangbangers, drug dealers, and terrorists for decades. Never have I been so riveted by the writings of an ex-con and his insider's view on the drug wars, the natural schisms and associates one makes in federal prison, and the impossible deaths of notorious Boston wiseguy James 'Whitey' Bulger and Jeffrey Epstein. In the World is like being a passenger in the getaway car of an armored car heist. Strap in and enjoy the adrenaline as you watch a guy transform himself from narcotics kingpin to Hollywood hotshot. Can't recommend it enough.”.—Michele R. McPhee, author of Maximum Harm

Praise for Smuggler's Blues
“Many of the tales of his real-life adventures in search of a massive high and the ultimate payday are absorbing in the same zany way as his fiction . . . [f]eaturing encounters with the late David Bowie and Norman Mailer, plus Mick Jagger and convicted murderer and mob boss Whitey Bulger.” —Publishers Weekly

“A wild, entertaining ride . . . A compulsively interesting story with the requisite drama and suspense that will keep the pages turning. . . . Stratton and his crew pulled off a surprising number of impressive smuggles while Wolfshein tried to pin them down, and Stratton throws in a lot of extra color by way of lavish spending, sex, and glittering parties that make heads spin. Near misses abound and offer great fun for readers.” —Kirkus Reviews

"Smuggler's Blues is an adrenaline rush, a high-stakes ride from Maine to Lebanon to the Caribbean. . . . This book will get under your skin, enter your blood stream, and mess with your head.” —T. J. English, New York Times bestselling author The Savage City and Havana Nocturne

"There is no one who both knows the deadly world of international drug trafficking and who can tell the tale in such a stylishly compelling way, than Richard Stratton, a man who walked the walk and lived to tell about it." —Michael Levine, former undercover DEA agent and author of the New York Times bestsellers Deep Cover and The Big White Lie

"No wonder Norman Mailer liked hanging out with Richard Stratton. His drug-fueled early years read like the stuff of great fiction. Crazed drug cowboys, daredevil pilots, Lebanese hashish lords, a DEA nemesis who's half Javert, half Columbo . . . plus, cameo appearances by Jagger, Bowie, and Whitey Bulger. Smuggler's Blues is not only a mad romp, it's a brilliant indictment of the flaming absurdity of America's war on drugs." —David Talbot, founder of Salon and author of The Devil's Chessboard: Allen Dulles, the CIA and the Rise of America's Secret Government

“Beneath the story of drug smuggling and risk . . . Stratton offers a blistering indictment of the Drug War and a call for Americans to be actively engaged in the political process.” —The Stoner’s Cookbook

"Smuggler’s Blues is a must-read for those enticed by nonstop adventure and outlaw books. It’s definitely one for the handy bookshelf.” —Provincetown Banner

"In 1982, Richard Stratton, one of the last great hippie marijuana smugglers, was hit with a long stretch of hard time all because he wouldn’t give the feds his buddy, Norman Mailer. Yes, that Norman Mailer, the literary lion with the roaring ego. Sure, the Drug Enforcement Administration had Stratton dead to rights on the crime. In his new book, Smuggler’s Blues, he details exactly how he managed to get a ton and a half of Lebanese hash through customs in New Jersey in a $15 million deal." --New York Daily News

Praise for Kingpin
"Stratton’s latest book . . . details his treacherous trip through the federal prison system with an unfiltered voice and a knack for finding humor in the most desolate of spaces."—New York Post

"Richard Stratton's powerful memoir Kingpin is a sharp reminder that 'Orange' in not the 'New Black.' There is nothing romantic or exotic about a trip through the criminal justice system and federal prison. Stratton's page-turning account takes us through the mendacity of the criminal justice system, with its relentless drive to turn him into an informer, and into the arbitrary and casual brutality of prison life. Spoiler alert: Stratton refused to snitch and emerged with his principles intact. But he paid a heavy price for fighting the war on drugs."—Ronald L. Kuby, civil rights and criminal defense attorney

"Stratton's portrait of prison life is unsparing . . . This prison memoir stands out due to Stratton's elite criminal status and also the quality of his writing, which tends to be observant, mordant, and sometimes hilariously vulgar. A pulpy, well-crafted recollection of time behind bars packed with unsettling questions about society's embrace of mass imprisonment and the drug war."—Kirkus Reviews

From the Big House to Hollywood (Cannabis Americana: Remembrance of the War on Plants, Book 3)

Book #3 of Cannabis Americana: Remembrance of the W
By Richard Stratton
Published by Arcade
Distributed by Simon & Schuster
LIST PRICE $16.99
PRICE MAY VARY BY RETAILER

More books in this series: Cannabis Americana: Remembrance of the W