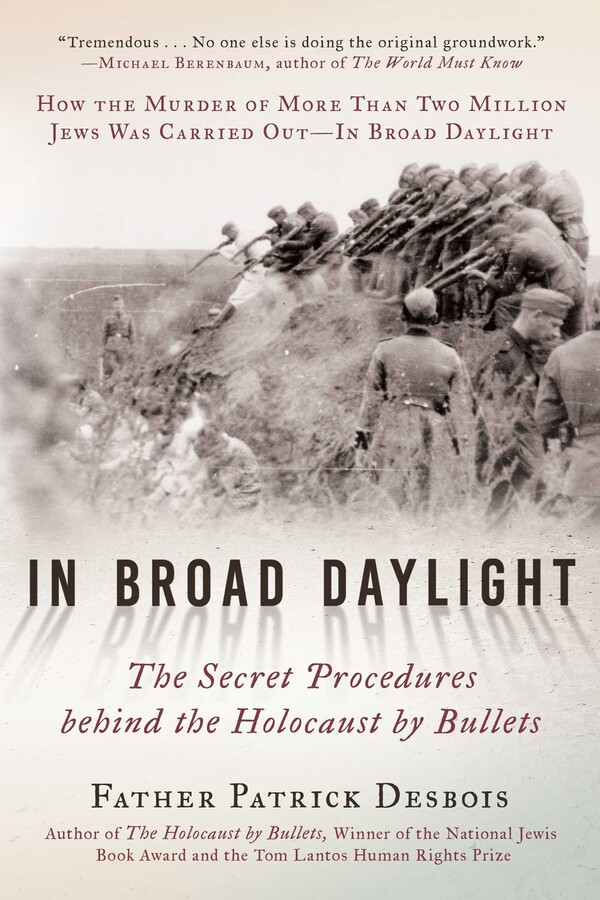 The Secret Procedures behind the Holocaust by Bullets


In Broad Daylight documents the mass killings Jews in seven countries formerly part of the Soviet Union that were invaded by Nazi Germany. Drawing on interviews with neighbors of the Jews, wartime records, and the application of modern forensic practices to long-hidden grave sites, It shows how these murders, this Holocaust by Bullets, followed a template, or script, which included a timetable that was duplicated from place to place.

Far from being kept secret, the killings were done in broad daylight, before witnesses. Often, they were treated as public spectacle. The Nazis deliberately involved the local inhabitants in the mechanics of death—whether it was to cook for the killers, to dig or cover the graves, to witness their Jewish neighbors being marched off, or to take part in the slaughter. They availed themselves of local people and the structures of Soviet life in order to make the Eastern Holocaust happen.

Narrating in lucid, powerful prose that has the immediacy of a crime report, Father Desbois assembles a chilling account of how, concretely, these events took place in village after village, from the selection of the date to the twenty-four-hour period in which the mass murders unfolded. Today, such groups as ISIS put into practice the Nazis’ lessons on making genocide efficient.

The book includes an historical introduction by Andrej Umansky, research fellow at the Institute for Criminal Law and Criminal Procedure, University of Cologne, Germany, and historical and legal advisor to Yahad-In Unum.
Father Patrick Desbois

Father Patrick Desbois is president of Yahad in Unum and holds an endowed professorship at Georgetown University. He is the author of The Holocaust by Bullets, winner of the 2008 National Jewish Book Award, and has received numerous honors for his groundbreaking work on the Holocaust, including the Humanitarian Award from the US Holocaust Museum. He resides in Washington, DC, and Paris, France.

“Were it not for Father Desbois and his team, most of us would still think the Holocaust was carried out in secret, behind the walls of the concentration camps. We would not have to consider the mothers and fathers who brought their children to watch the mass murder of innocent Jews. Or confront the fact that so many helped willingly and many more watched. Genocide, we learn from Desbois, ‘does not happen without the neighbors.’ It is not happening today ‘without the neighbors.’ And the reality for us all is that we are ‘the neighbors.’ Anyone who cares about humanity will not want to miss this book.”—Lara Logan, 60 Minutes

“This book should be required reading.”—Jonathan Safran Foer, bestselling and award-winning author of Everything Is Illuminated and member of the US Holocaust Commission

“What Father Desbois is doing is tremendous. . . . No one else is doing the original groundwork. The evidence he has gathered is very important—the forensic evidence of how they did the killing by bullets.”—Michael Berenbaum, author of The World Must Know

“The importance of Desbois’s new study lies in his detailed description of how hundreds of thousands of primarily poor, rural Jews were executed. . . . All the killings were done in broad daylight and deliberately involved the local population. . . . Finally, Desbois shatters postwar claims of innocence (that continue to be made through the current day) by the Russian Republic, Poland, and the Ukraine as to the role played by their non-Jewish citizens in the Holocaust.”—Jewish Book Council

“Father Patrick Desbois, a French priest, might be one of the greatest detectives of all time. . . . His most recent book, "In Broad Daylight, maps out the mass killings of Jews in Eastern Europe in exhaustive detail.. . . As a refutation to the Jew-hatred he has uncovered and to counter the growing number of people who deny the Holocaust, [it is] a painstaking account of the mechanics of killing whole communities of Jewish men, women, and children . . . providing a horrific account of the template Nazi troops used. . . and the role that bystanders often played in helping them.”—Jewish Voice

"Chilling . . . One wishes it were a novel rather than a factual recounting of the Nazi World War II slaughter of Jews in what was then the Soviet Union. . . . Published at a time when Holocaust denials dot the European landscape and white supremacy gains traction in the United States, it is a sharp warning of the dangers lurking when peoples or nations begin sliding down the slippery slope of racist ideologies."—CatholicPhilly.com

“If you sleep well at night, Father Patrick Desbois wants to change that. . . . In Broad Daylight chronicles in disturbing detail how the people in the former Soviet Union, young and old alike, were complicit in the killings. He plans to keep doing this work until the job is done, noting he has the blessings of the last two popes to keep at it.”—Jewish Louisville

"The details . . . may strike some as banal, but the banality is part of the picture: With essential roles filled by local people, it sometimes took a village to kill a village’s Jews."—Jewish News of Northern California

“[In his new] book called In Broad Daylight: The Secret Procedures behind the Holocaust by Bullets, Desbois says the Nazis and ISIS used many similar tactics, like executing people in public and enlisting local help in their murders. . . . His Paris-based nonprofit organization Yahad-In Unum now houses video testimony from thousands of witnesses detailing the methods, timing, and tactics of each massacre. ”—Eleanor Beardsley, All Things Considered, NPR

"One of his biggest—and most disturbing—discoveries is that despite the shroud of secrecy and silence that has existed for about seventy years, these mass killings were not only widely known, they were widely watched. It was a public spectacle, a public entertainment, not unlike Roman circuses and lynchings in the South. Interviews with witnesses detail how, as children, they were told to put on their best clothes to go watch the Nazis kill the Jews. The soldiers even handed them binoculars to help them see better. "When asked why his work matters, he responds, “Because it still happens. It’s not the past, unfortunately. It seems to be part of the future.”—aish.com

"The late Congressman Tom Lantos warned that ‘The veneer of civilization is paper thin. We are its guardians, and we can never rest.’ Fr. Desbois's chilling new book shows us a world stripped of its veneer of civilization, decency, and humanity. After reading his account, we cannot sleep well—Fr. Desbois doesn't intend us to."—Dr. Katrina Lantos Swett, President, Lantos Foundation

“Father Patrick Desbois expands on his earlier study of the Holocaust by Bullets with a deeply disturbing and penetrating account of the mass shooting process as a two-day event that started with a German official's calculation—the dimensions of the mass grave based on the size of the local Jewish population—and ended with Ukrainians, Poles, Russians, and other locals wearing the clothing of their murdered Jewish neighbors. Desbois's unusual book is a hybrid read—a lyrical memoir of rural life, a graphic crime report that jolts your sensibilities and senses, and an exhortation to investigate genocidaires both past and present. This is among the most detailed and precise accounts of the intense timing and routine methods employed by the Nazis and their collaborators in their torture, murder, and theft of 2.2 million Jews in Ukraine, Belarus, and Russia.” —Wendy Lower, John K. Roth Professor of History at Claremont Mckenna College, director of the Mgrublian Center for Human Rights, and author of the National Book Award finalist Hitler’s Furies

"Father Desbois is a generation too late to save lives. Instead, he has saved memory and history." —Wall Street Journal

"[Desbois] is a human bridge between the modern Jewish world and the Catholic Church and a major conduit through which the Holocaust will be remembered." —Christian Science Monitor

The Secret Procedures behind the Holocaust by Bullets