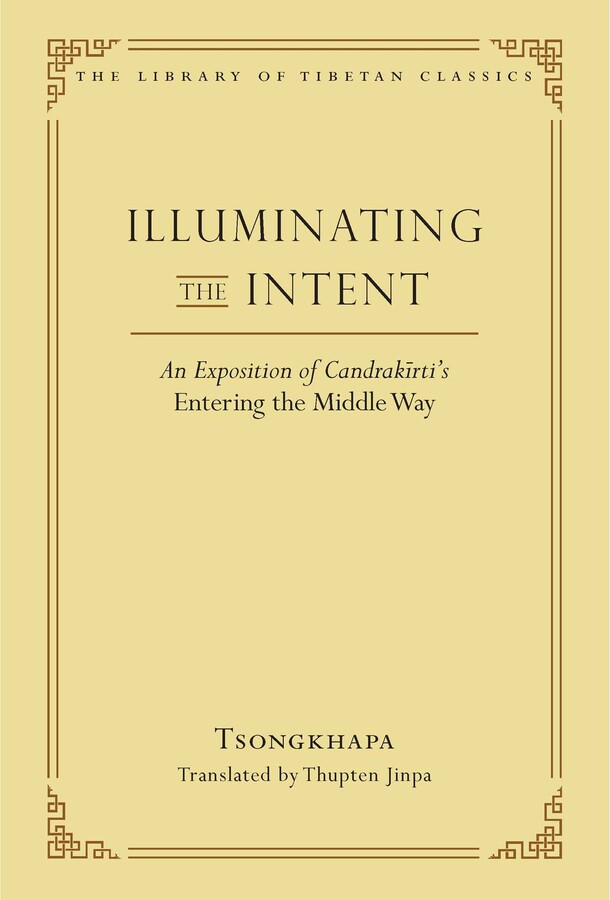 An Exposition of Candrakirti's Entering the Middle Way

The Dalai Lama’s translator and author of the definitive biography of Tsongkhapa here presents the first translation of one of that master’s seminal and best-known works.

This work is perhaps the most influential explanation of Candrakirti’s seventh-century classic Entering the Middle Way (Madhyamakavatara).

Written as a supplement to Nagarjuna’s Fundamental Verses on the Middle Way, Candrakirti’s text integrates the central insight of Nagarjuna’s thought—the rejection of any metaphysical notion of intrinsic existence—with the well-known Mahayana framework of the ten levels of the bodhisattva, and it became the most studied presentation of Madhyamaka thought in Tibet.

Completed the year before the author’s death, Tsongkhapa’s exposition of Candrakirti’s text is recognized by the Tibetan tradition as the final standpoint of Tsongkhapa on many philosophical questions, particularly the clear distinctions it draws between the standpoints of the Madhyamaka and Cittamatra schools.

Though it is often cited and well known, this is the first full translation of this key work in a Western language.

“Jé Tsongkhapa’s Illuminating the Intent presents the enlightened meaning of Nagarjuna, Buddhapalita, Candrakirti, and Santideva, who clarify Lord Buddha’s teachings on selflessness. It is famed for its clarity and for the depth of its decisive analysis of the difficult points of the view of emptiness. Geshe Thupten Jinpa has admirably applied his own years of study and thought to bring this precious work to English-speaking readers.”

"In Illuminating the Intent: An Exposition of Candrakirti’s “Entering the Middle Way,” Thupten Jinpa brings to bear his lifetime of experience and the unmatched translations skills of textual precision, clarity, and confidence in meticulously transmitting the great stylistic elegance, methodological rigor, and the deep Prasa?gika insights of Tsongkhapa in a way no other work before it has succeeded."

“Illuminating the Intent is Tsongkhapa’s renowned commentary on Candrakirti’s Entering the Middle Way, the foundational text for the study of Madhyamaka in Tibet. Composed in 1418, it is Tsongkhapa’s last exposition of Madhyamaka. Here he sets forth the meaning of emptiness in the context of the practice of the bodhisattva, delineating each of the ten perfections along the path. Once again, we have Thupten Jinpa to thank for a masterful translation of a Buddhist classic.”

"I always look forward to reading any translation that Thupten Jinpa brings to publication. Not only does he have a masterful way of rendering a Tibetan text into very clear English, he brings to it a clear understanding of the meaning of the text that is derived from his broad education. His presentation is also enhanced by his rich cross-cultural experience. It is significant that he brings these qualifications to the first complete translation of Illuminating the Intent,  pivotal text in the Tibetan tradition, for the reader can now definitely, as he says, 'engage with the text in an efficient and comprehensive manner.'"

– Joshua W.C. Cutler, Editor-in-Chief of The Great Treatise on the Stages to Enlightenment

“Thupten Jinpa’s succinct introduction provides a wealth of information on the central issues raised in this important Tibetan commentary on the stages of the bodhisattva path. His skillful translation makes even Tsongkhapa’s lengthy treatment of the complexities of understanding emptiness clear and accessible.”

– Karen Lang, professor emerita, University of Virginia, and author of Four Illusions: Candrakirti’s Advice to Travelers on the Bodhisattva Path

“This exceptional work is the eloquent culmination of Tsongkhapa’s rigorous efforts as a scholar and yogi, written when his analysis of the profound view was complete. Thupten Jinpa has been steeped in the Geluk tradition since childhood, and his assiduous study, reflection, and debate ultimately earned him a geshé lharampa degree. His Cambridge education, decades of interpreting for His Holiness the Dalai Lama, engagement with contemporary academics, and rich experience of translating Tibetan Buddhist literature have made him singularly well placed to present a scintillating rendering of Illuminating the Intent in English. Countless grateful readers will rejoice at his gift.”

“Illuminating the Intent is a tremendous accomplishment. Thupten Jinpa has given us a lucid and eloquent translation of a monumental work of Buddhist philosophy, representing Tsongkhapa’s final word on the Middle Way. His scholarly precision and accessible language, along with his well-written introduction to Tsongkhapa’s Madhyamaka and helpful glossary of key terminology, open this crucial resource to a broad audience. This will be the go-to wellspring for scholars and general audiences alike.”

“Illuminating the Intent represents Tsongkhapa’s final perspective on Madhyamaka philosophy, held in high esteem in the Tibetan monastic curriculum. Thupten Jinpa, as a Lharampa geshé, is a product of this curriculum, as well as being a broadminded and erudite scholar and translator . . . I cannot think of a more suitable person to take on the task of translating this work.”

“In his superb translation of Illuminating the Intent, Thupten Jinpa maintains a balance between scholarship and readability to authentically convey Tsongkhapa’s final understanding of the convergence of reality, compassion, and practice.”

– Gareth Sparham, author of Tantric Ethics and Vast as the Heavens, Deep as the Sea

An Exposition of Candrakirti's Entering the Middle Way

More books in this series: Library of Tibetan Classics