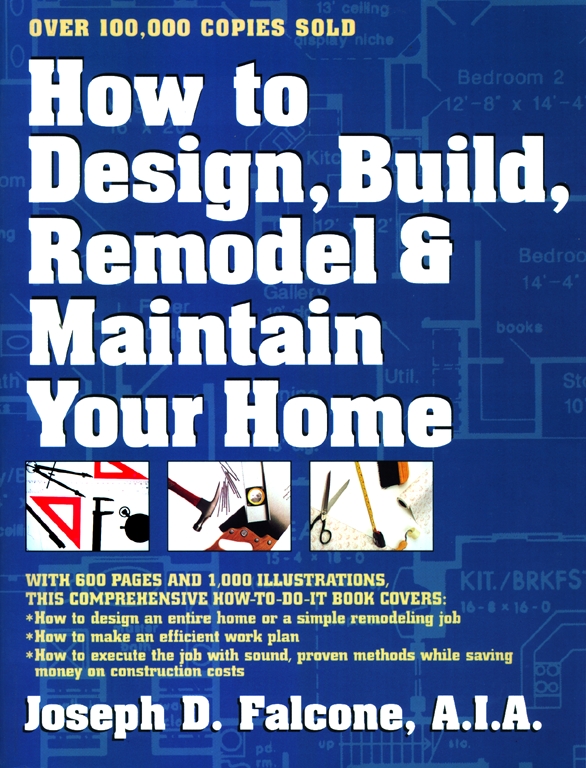 How to Design, Build, Remodel & Maintain Your Home

With this comprehensive book, you will learn enough about construction materials and labor to save up to 70 percent on the cost of your home and still have a house mare sound than any ready-built structure.
You will learn enough about creating a plan so that you or a professional builder can translate your dream into a reality.
You will learn enough about good building methods to avoid the "high cost of cheap construction."
Included in this volume is complete and detailed information on all the following topics:
Basic Tools and Use
* Doors and Windows
* Site Selection
* Exterior Finishes
* Building and Zoning Laws
* Interior Non-Bearing Partitions
* How to Read Plans
* Soundproofing
* Preliminary Design Studies
* Plumbing
* Designing for the Physically Handicapped
* Heating
* Air Conditioning
* Dangerproofing
* Electricity
* Cost Control
* Solar Energy
* Staking Out
* Fire Stops
* Introduction to Construction
* Insulation and Energy-Saving Techniques
* Foundations
* Termites and Carpenter Ants
* Ceiling Finishes
* Floor Framing
* Interior Wall Finishes
* Wall Framing
* Floor Finishes
* Ceiling Framing
* Interior Finishes
* Roof Framing
* Saunas
* Plank and Beam Framing
* Site Work
* Sheathing
* High Cost of Cheap Construction
* Roof Covering
* Construction Forms and Contracts
Written simply enough for the layman to understand, with enough sophisticated knowledge and creative ideas for the professional, here's a book no home builder should be without.

BASIC TOOLS and USE

* Hold a hammer near the end of the handle for more hitting power. To start a nail, hold it in place and tap it gently a few times until it is firmly set. Hit straight in.

* To avoid hammer marks on the wood, use a nail set or another nail to drive a nail the last one-eighth inch into the wood.

* To remove a nail use claw end of hammer. Place a small block of wood under the head of the hammer to avoid marking the wood.

You need two types of screwdrivers for household repairs:

Straight blade, and Phillips. Both come in various sizes. The blade of the screwdriver should fit the slot in the screw.

* When using the screwdriver, push against the head of the screw as you turn it.

* It's easier to put a screw into wood if you make a hole first with a nail or drill. Rub wax or soap on the screw threads to make it go in easier.

A slip joint pliers can be used for many jobs around the house.)

* Use pliers to hold a nut while you turn a bolt with a screwdriver.

* Use it to remove nails or brads. Pull the nail out at the same angle it was driven in. Use small blocks under the pliers if you need leverage.

* Use it to turn nuts. Wrap tape or cloth around the nut to avoid scratching it.)

An adjustable wrench is adjustable to fit different sizes of nuts. If a nut is hard to loosen, apply a few drops of penetrating oil or kerosene. Let it soak a couple of hours or overnight. If the wrench has a tendency to slip off, try turning it over.

A handsaw with about 10 teeth to the inch is good for most household work.

Mark where you want to cut. Pull the saw back and forth several times to start a groove. Let the weight of the saw do the cutting at first. If you are sawing a board, it will be easier if you support it and hold it firmly near where you're cutting.

Nails, screws, and bolts each have special uses. Keep them on hand for household repairs.

Box nails have large heads. Use them for rough work when appearance doesn't matter.

Finishing nails have only very small heads. You can drive them below the surface with a nail set or another nail, and cover them. Use them where looks are important, as in putting up panelling or building shelves.

SCREWS are best where holding strength is important. Use them to install towel bars, curtain rods, to repair drawers, or to mount hinges. Where screws work loose, you can refill the holes with matchsticks or wood putty and replace them.

Use molly screws or toggle bolts on a plastered wall where strength is needed to hold heavy pictures, mirrors, towel bars, etc.

Molly screws have two parts. To install, first make a small hole in the plaster and drive the casing in even with the wall surface. Tighten screw to spread casing in the back. Remove screw and put it through the item you are hanging, into casing, and tighten.

Toggle bolts. Drill a hold in the plaster large enough for the folded toggle to go through. Remove toggle. Put bolt through towel bar or whatever you are hanging. Replace toggle. Push toggle through the wall and tighten with a screwdriver.

Plastic anchor screws should be used where you want to attach something to a concrete wall. To install, first make a small hole in the wall and drive casing in even with the wall surface. Put screw through item and into the casing, and tighten.

Joseph D. Falcone, AIA is an architect, educator, city planner and author. He is head of an architectural firm with a permanent staff of architects and engineers, served as Chairman of City Plan Commission for 18 years and has taught and is currently teaching at Secondary, College, and University levels. He is listed in Who's Who In The East for the past five years for outstanding design in construction and has won a national award in design by the American Association of School Administrators. He has been elected to the International Registry of Who's Who. Mr. Falcone is considered an expert in all types of building design and construction and has a proven track record of optimum combination of creativity, logic, soundness and economy.

How to Design, Build, Remodel & Maintain Your Home