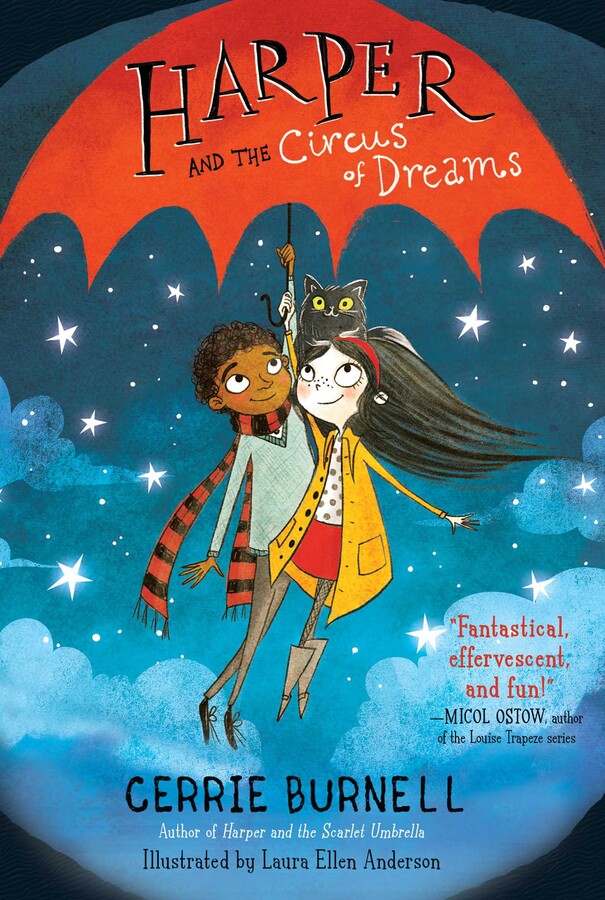 Harper and the Circus of Dreams

​"Brimming with charming illustrations and written with flowing wonderment, this is a fantastical slip of a story where magic and music combine to create enchantment. . . . A winsome tale that will make the minds of early chapter-book readers sparkle." —Kirkus Reviews

Late one evening as the stars begin to twinkle, Harper and her friends are flying on the scarlet umbrella when they see a girl running on air, skipping along a tightrope. She leads them to the Circus of Dreams, suspended in the air by hot air balloons.

There, they meet the mermaid acrobat, the spectacular circus baker, the mysterious fortune teller and the acrobatics troupe, all more spectacular than one could dream.

But as they learn more about the Circus of Dreams, Harper learns a secret about her past that is more than magic. . . .

Harper and the Circus of Dreams continues the adventures of Harper and her friends in a magical mystery like no other. An enchanting story of friendship, music, and magic featuring a diverse cast, brought to life through stunning illustrations, this is a book to be shared and treasured.

Cerrie Burnell is a presenter, actress, and writer, best known for her work in British children’s TV. She was featured in the Guardian’s 2011 list of the one hundred most inspirational women. She divides her time between London and Manchester, England.

Laura Ellen Anderson has been a children’s book illustrator since graduating from the University of Falmouth. She is the creator of the Evil Emperor Penguin comic and the illustrator for many books including the Witch Wars series. She lives in the United Kingdom.

Praise for Harper and the Circus of Dreams:

"Brimming with charming illustrations and written with flowing wonderment, this is a fantastical slip of a story where magic and music combine to create enchantment. . . . A winsome tale that will make the minds of early chapter-book readers sparkle." —Kirkus Reviews

"This installment is sure to float into the hearts of readers looking for a new adventure." —School Library Journal

Praise for Harper and the Scarlet Umbrella:

“A wonderful introduction to chapter books, filled with fun illustrations, young readers . . . will enjoy following Harper as she finds adventure at every turn.”—Calgary Herald

“In this lyrical, action-packed fantasy, Harper is allowed to use her aunt’s Scarlet Umbrella and later discovers that her cat is missing. The Scarlet Umbrella has magical powers; it leads her to the homes of others who are missing cats. As Harper works with her friends to find the felines and bring them home, they observe new strengths in one another. Dreamy Liesel, ‘with tangled, blonde hair and filthy nails,’ implements plans of action with impressive leadership skills. Liesel's poetic brother, Ferdie, is strong and courageous. Nate, who is visually impaired, assists with his ability to hear incredibly soft sounds and maneuver in the darkness. The kids meet and confront the Wild Conductor, who has enchanted the cats. A chase ensues, with Harper and Nate flying across town in the magical Umbrella. Harper uses her musical gifts to lure the cats back with ‘a song of stars and mist and hope. A song that spread across the sky, as if it came from the heavens.’ The kids successfully battle the Wild Conductor and bring the cats home. Line drawings throughout depict the smartly dressed and messy characters. Ample action keeps the story accessible for beginning chapter book readers. Originally published in the United Kingdom, this lively tale is sure to win fans in the United States, from cat lovers to music aficionados to fantasy fans. VERDICT: A winning tale of teamwork and artistry. A solid purchase for most chapter book collections.” –School Library Journal

“This lushly-written, enchanting salute to magic, music and adventure is so intriguing that even this confirmed dog lover was rooting for Harper to be reunited with her beloved cat. I suspect readers of Harper and the Scarlet Umbrella will be left thinking about their own umbrellas in a whole new way.” –Nancy Krulik, New York Times bestselling author of Katie Kazoo and Project Droid

“Harper and the Scarlet Umbrella is a magical, musical tale that sings with whimsy and charm! There’s not a wrong note to be found in this boisterous adventure, as children save the day as only children can. Fantastical, effervescent, and fun!” –Micol Ostow, author of the Louise Trapeze series

Harper and the Circus of Dreams

More books in this series: Harper