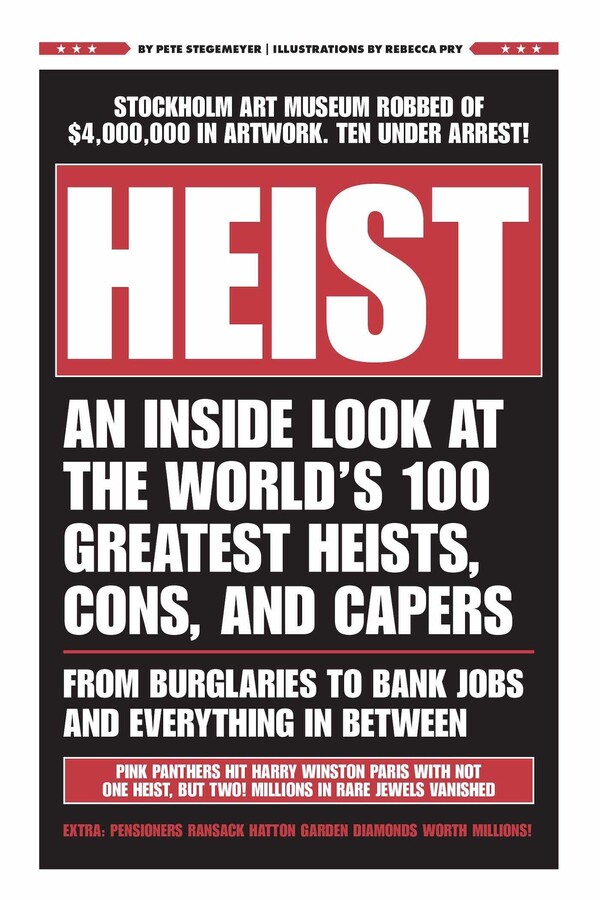 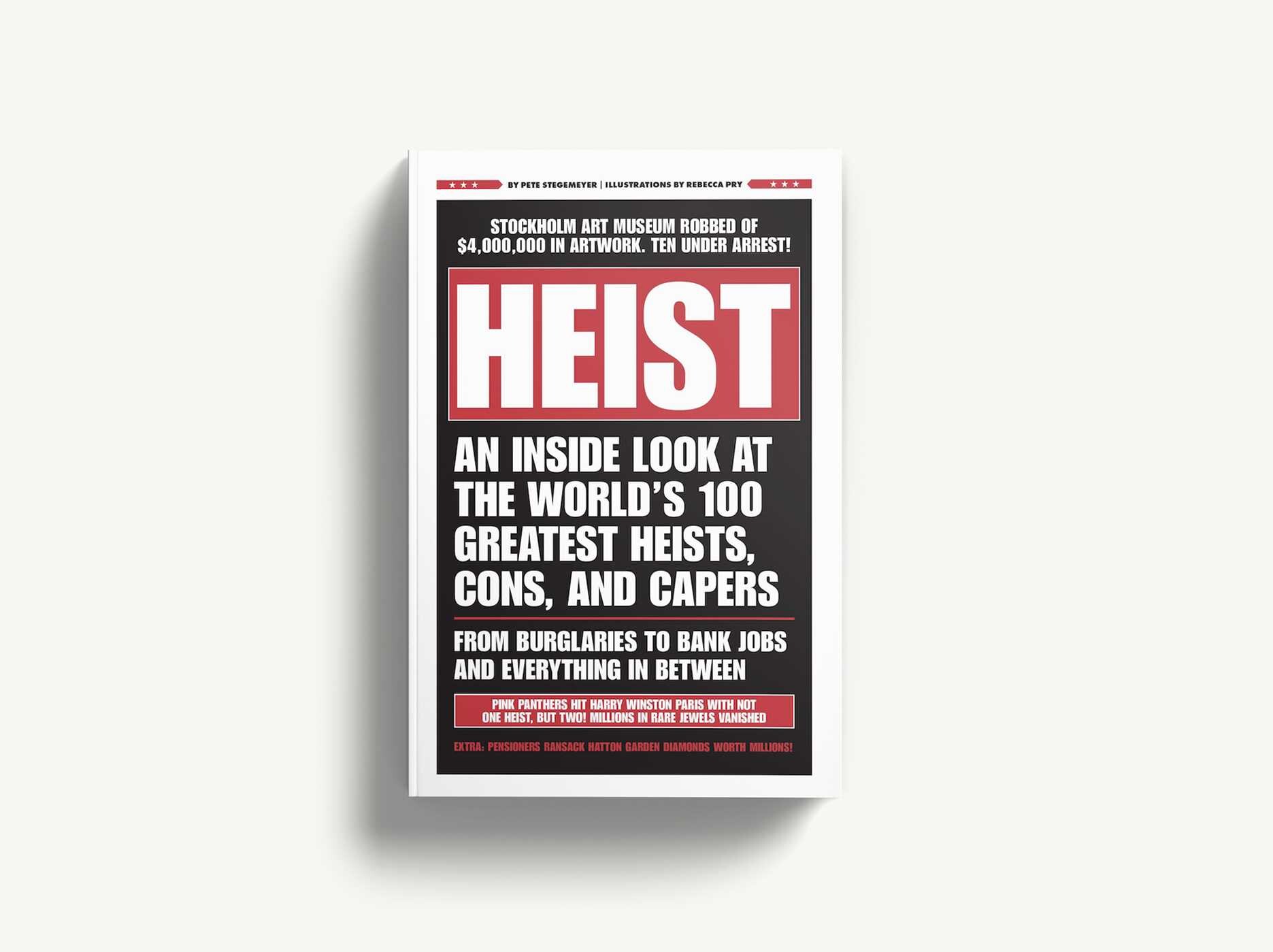 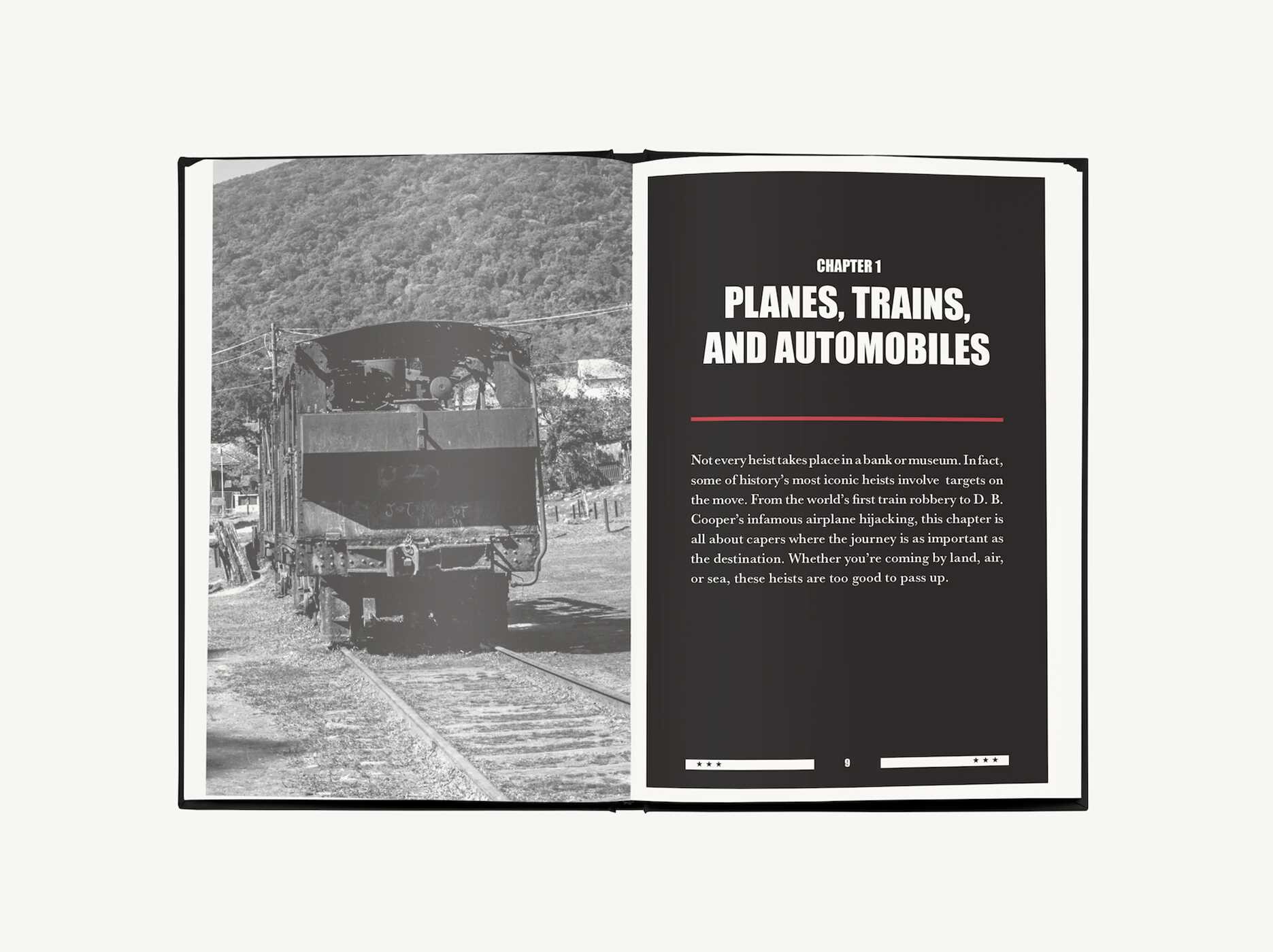 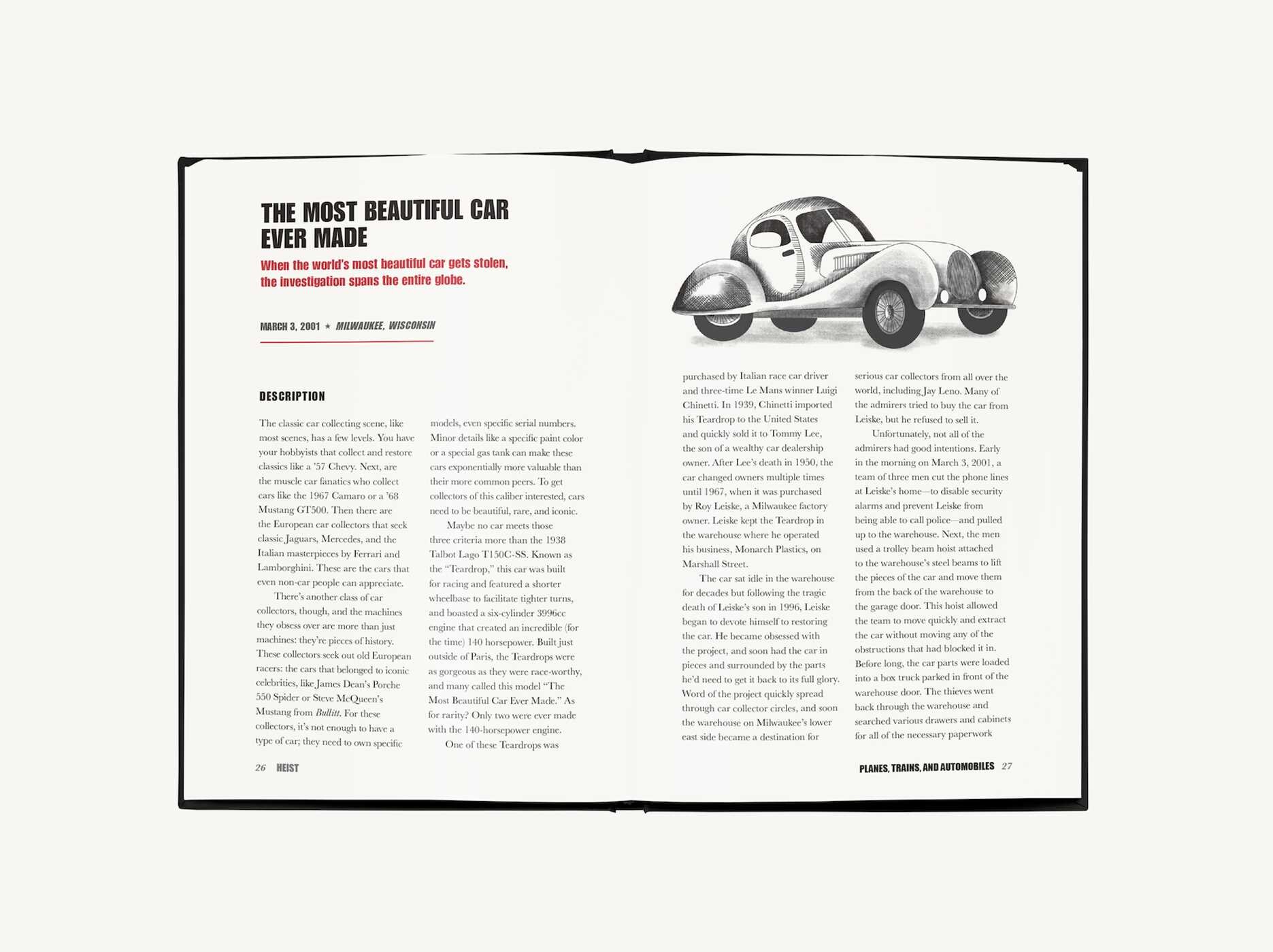 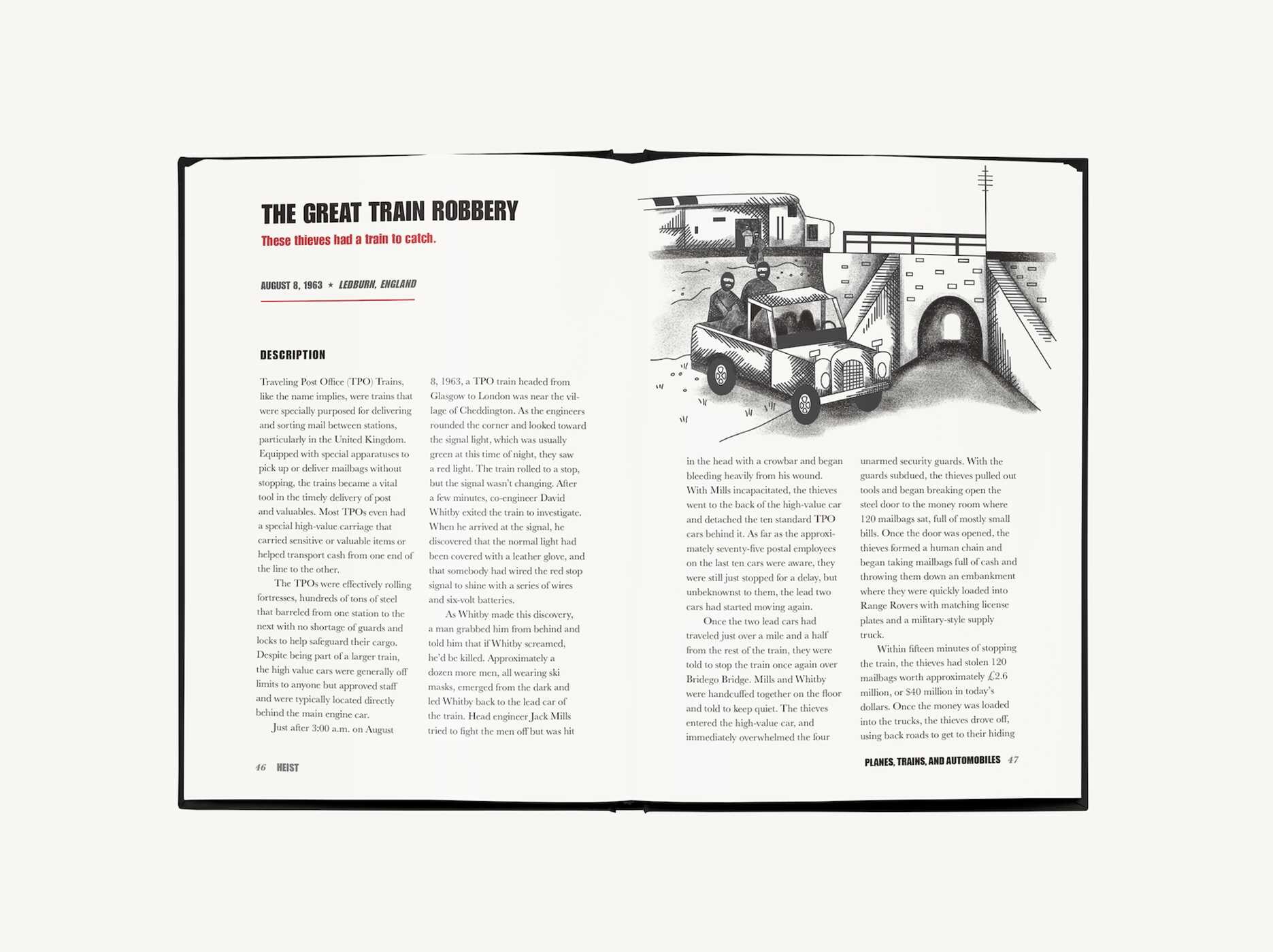 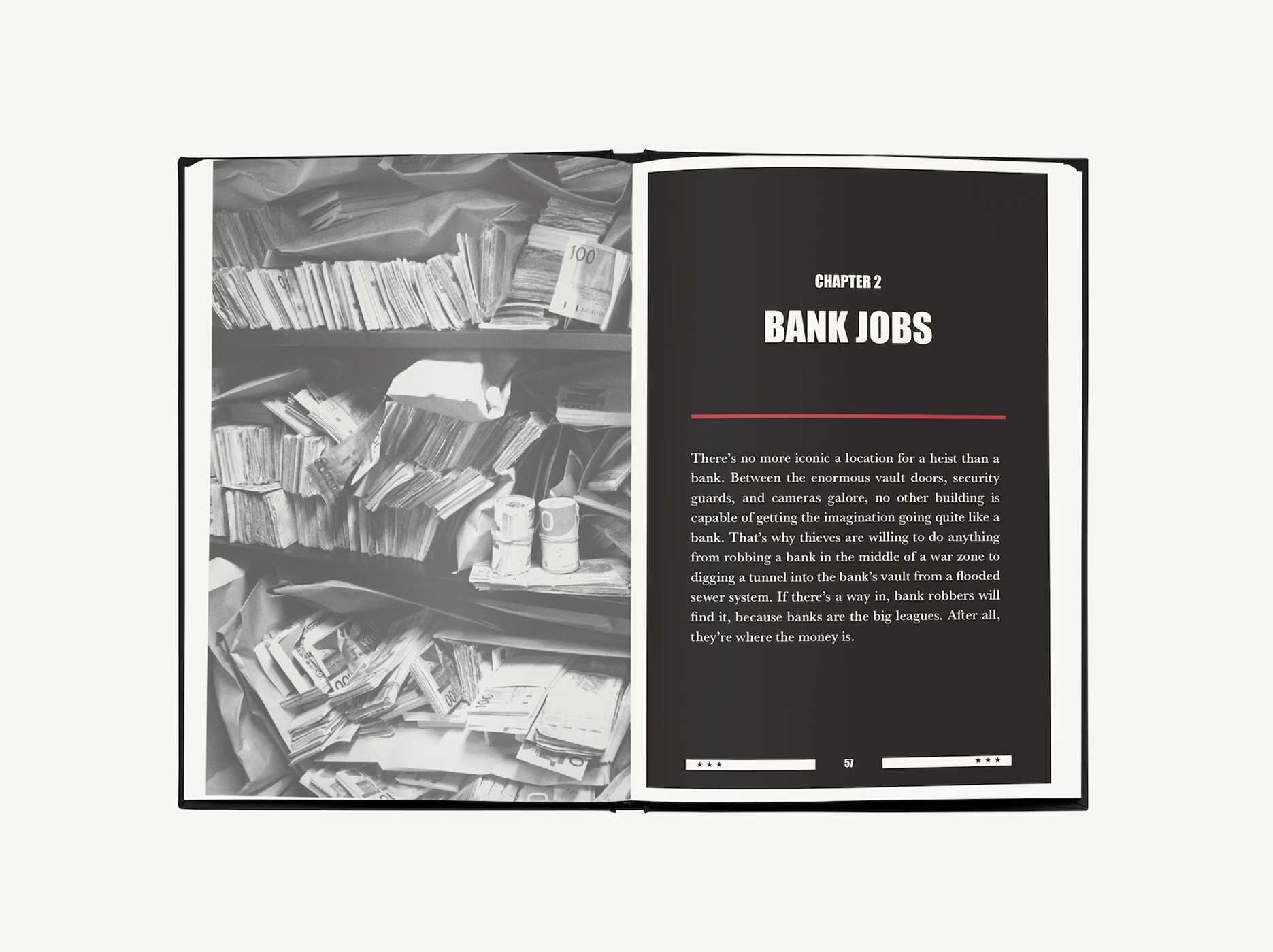 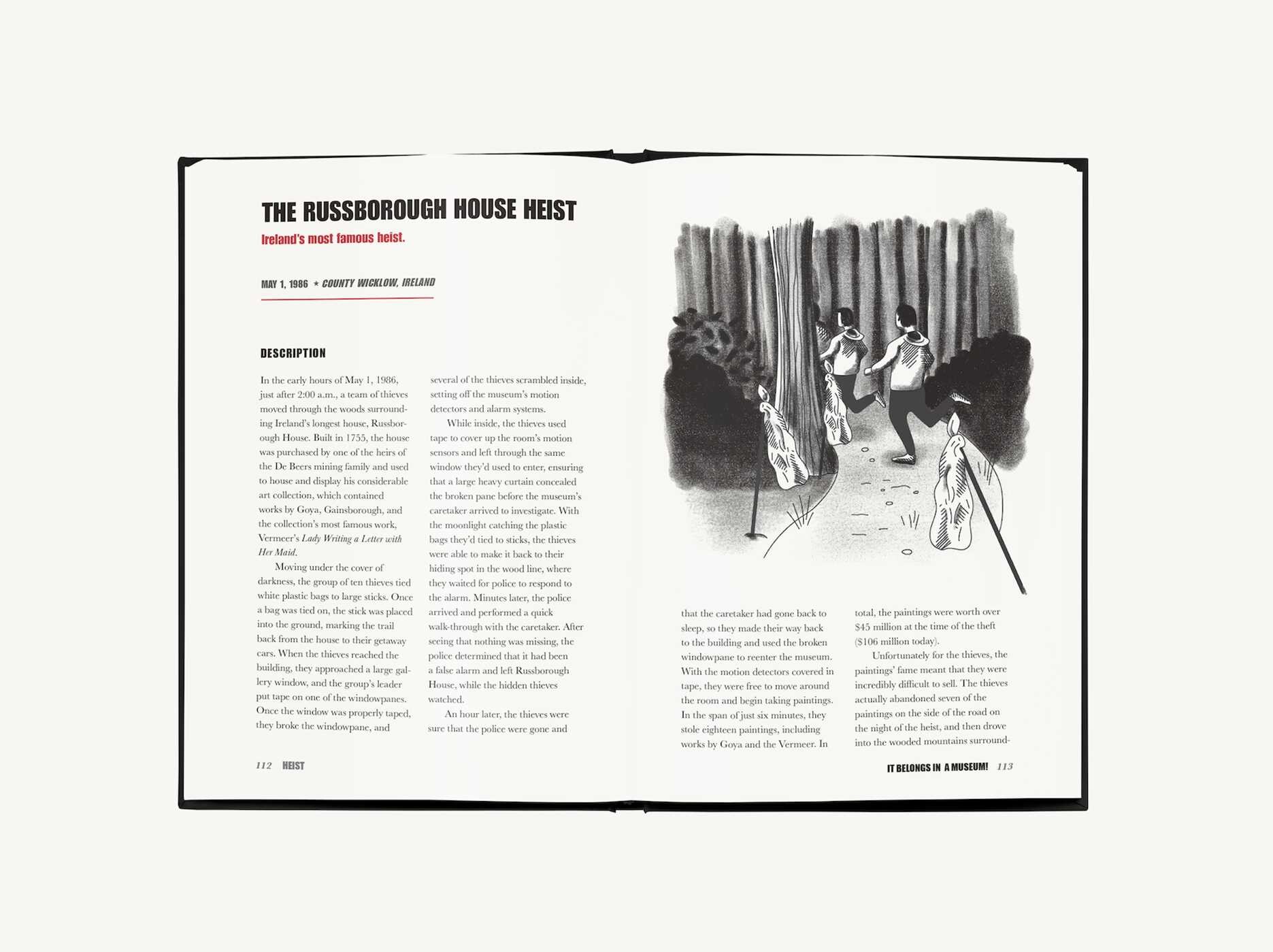 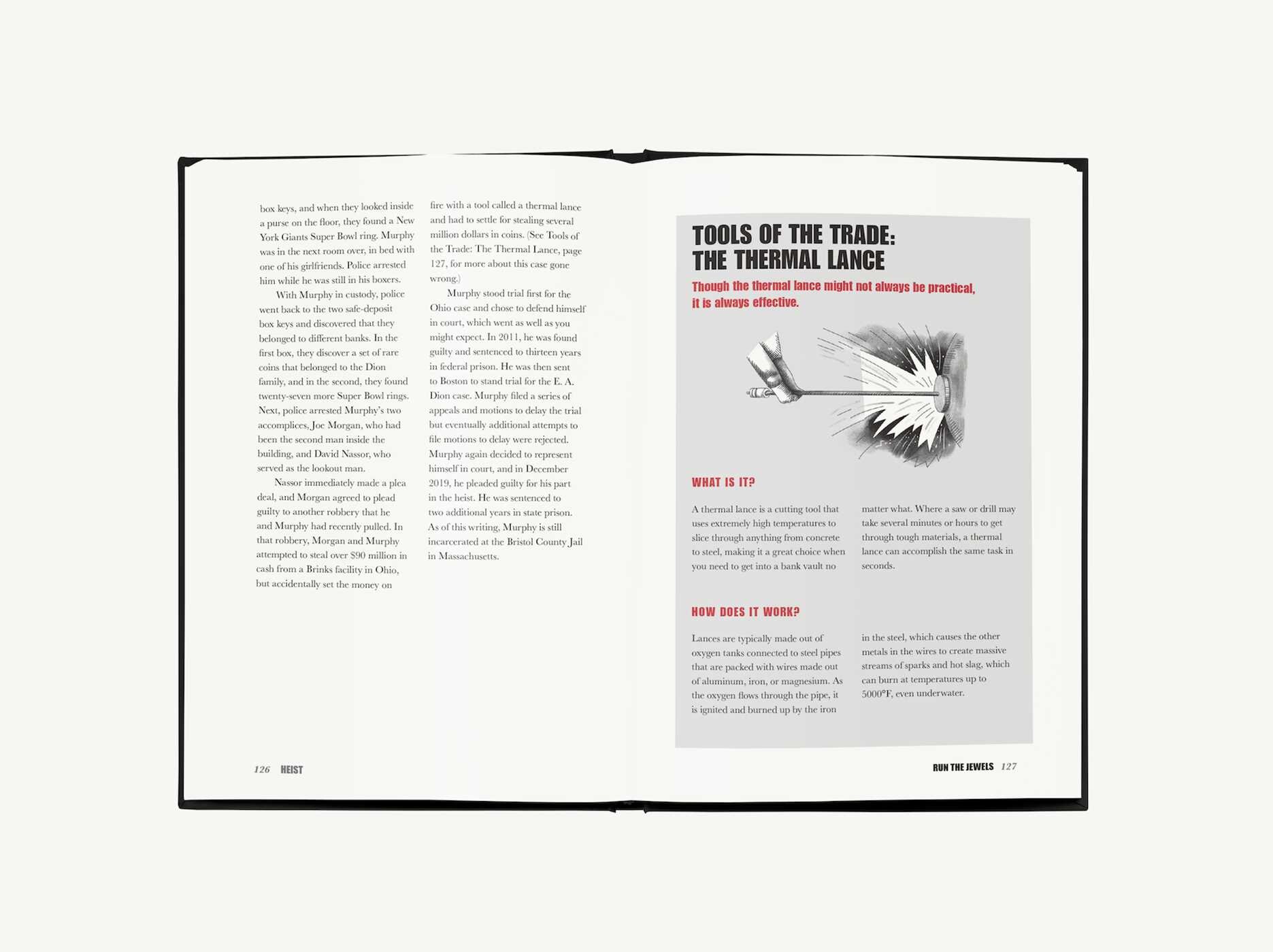 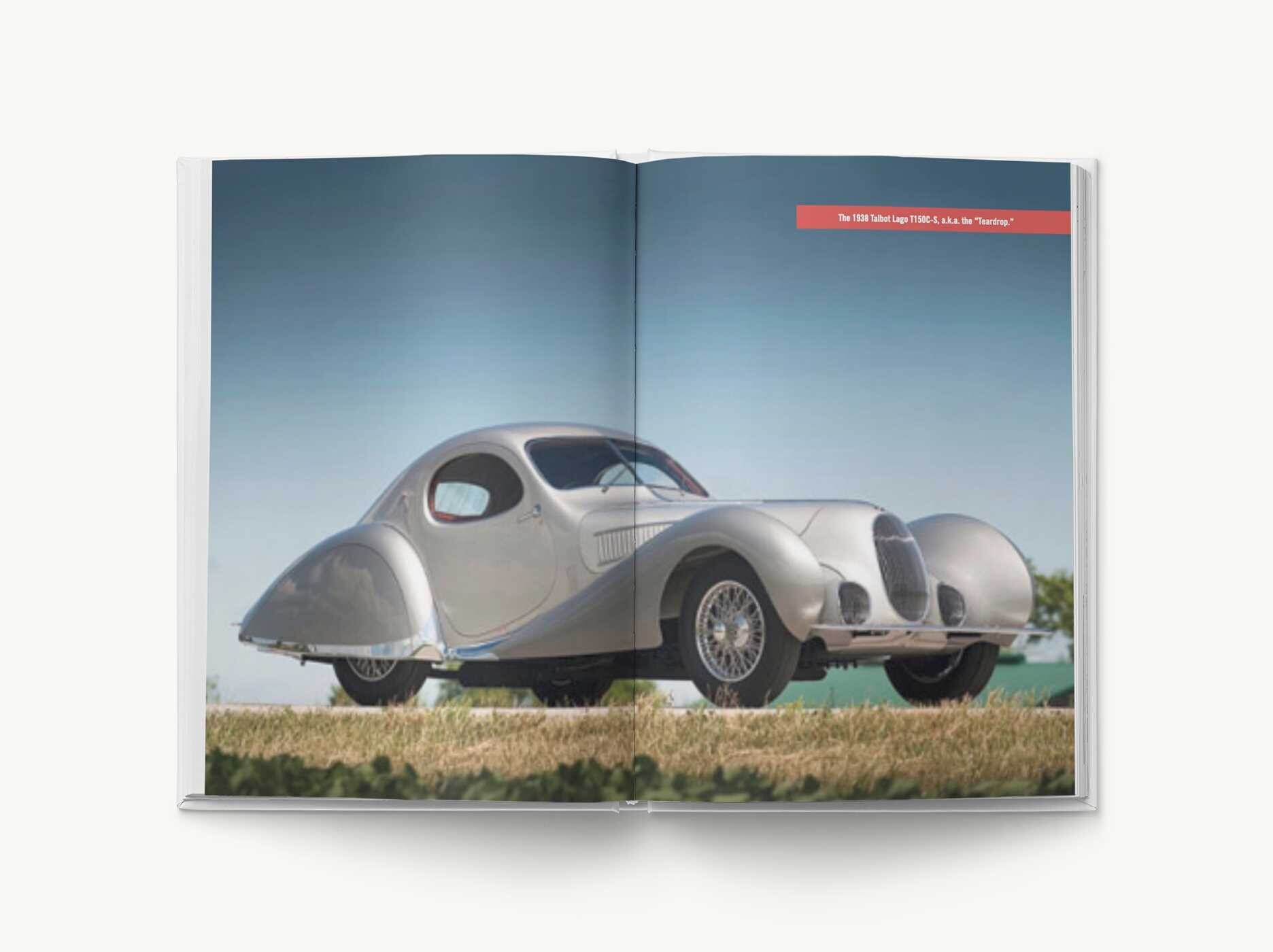 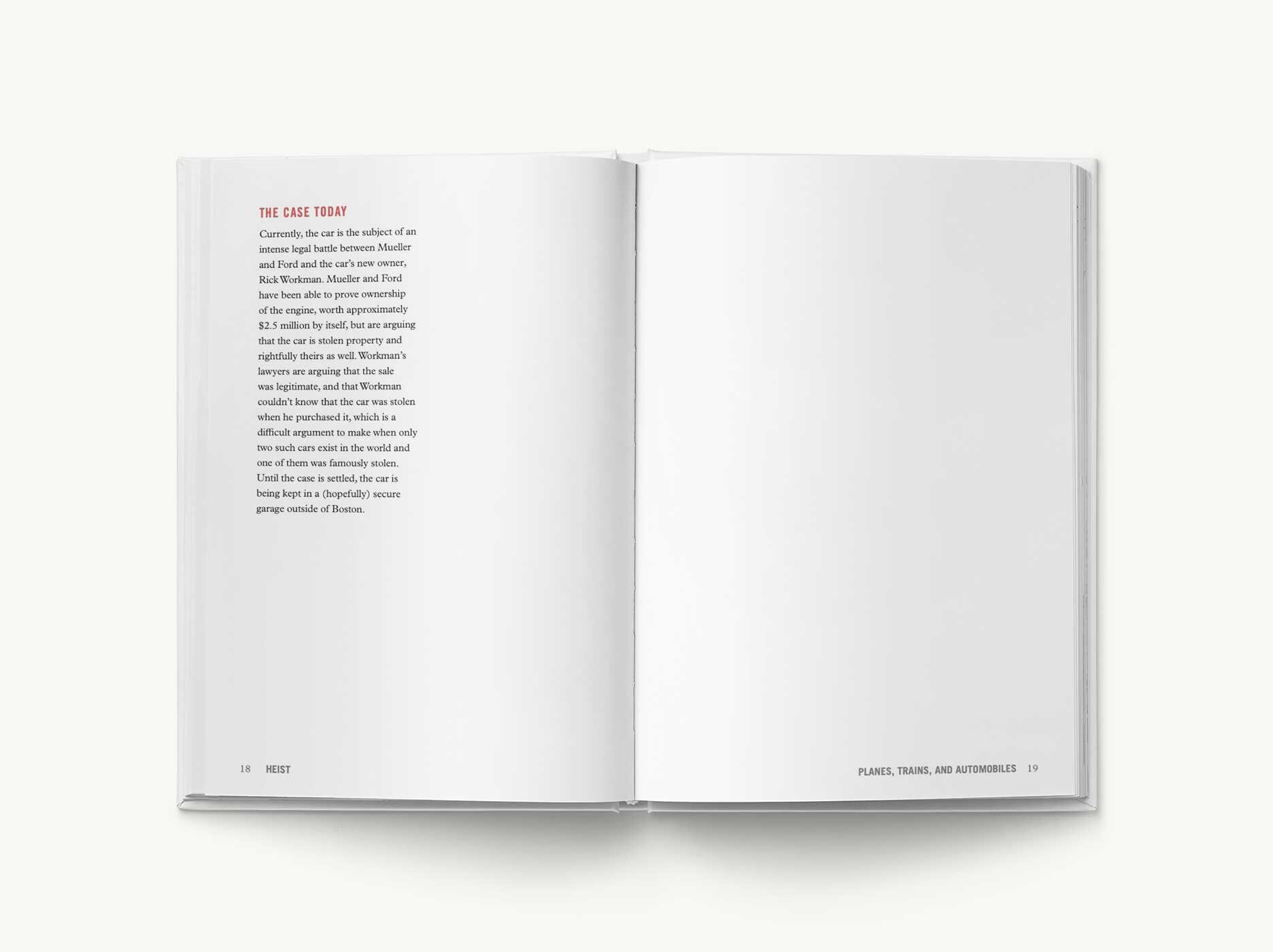 An Inside Look at the World's 100 Greatest Heists, Cons, and Capers (From Burglaries to Bank Jobs and Everything In-Between)

By Pete Stegemeyer
LIST PRICE $29.95
PRICE MAY VARY BY RETAILER

Unlock the cultural obsession with high-stakes robberies in Heist, a collection of the world’s greatest real-life break-ins. From the Isabella Stewart Gardner Museum’s famous art heist to the disappearance of the Marie Antoinette watch, these 100% true stories will have you on the edge of your seat—and double checking the locks on your doors!

Have you ever watched a movie like Ocean’s Eleven and thought: “There’s no way that could ever actually happen, right?” Wrong. In the US alone, there have been dozens, if not hundreds, of heists, from bank break-ins to museum plunders. In this premium compendium, we’ll walk through the most impressive ones, diving into the details behind each case, the detectives that led the investigations, how the events unfolded, and what mysteries remain. The hardcover book will explore the top 50 incidents, including:

1. The Isabella Stewart Gardner Museum Heist: In March of 1990, two men dressed up as police officers and sweet-talked their way past security at the Isabella Stewart Gardner Museum in Boston, MA. After tying up the real guards, these men dismantled and packed up 13 works of art, loaded them onto a truck, and drove off into the night, making the 81- minute breach one of the most expensive in modern history. Today, it remains the single largest property theft in the world.
2. The Great Train Robbery: Not all heists happen in buildings. In fact, one of the most popular ones was the 1963 train robbery in which nearly 2.6 million pounds was lifted from a Royal Mail train headed to London. Using intel provided by a man on the inside dubbed The Ulsterman, the group rigged the railways traffic light system to bring the train to an extended stop, during which time, they funneled the money from one of the carriages into a waiting truck by way of a human chain.
3. The French Bank Vault Tunnelers: On the morning of July 19, 1976, workers from a safe manufacturing company were called to the Société Générale bank to fix a faulty vault door that appeared to be jammed. When they drilled into the vault and peered in to diagnose the problem, though, what they found was not a loose screw or broken hinge, but a door that has been welded shut...from the inside. Also scattering the room was a couple of wine glasses, a portable stove, and a giant tunnel system that proved to be the method of transport for thieves, who had dug their way into the bank, spent the weekend there, and left with ten million in cash.
4. D. B. Cooper’s Escapades: The subject of many conspiracy theories, D. B. Cooper (not his real name) hopped on a Boeing 727 in a trench coat and sunglasses in 1971. When the plane had reached cruising altitude, Cooper hijacked it, extorting 200,000 dollars before strapping on a parachute, jumping out of the plane, and disappearing into thin air. This “aerial heist” remains unsolved to this day and remains one of the FBI’s most frustrating open cases.
5. The Botched Crown Jewels of England Theft: Back in 1671, a man named Thomas Blood (a cool name, by any standard) decided: “Eh, I’m gonna steal the Crown Jewels.” He reached out to Talbot Edwards, the keeper of the stones, with a proposition: if you give me a private viewing of the gemstones, I’ll have my nephew marry your daughter (a nephew who, naturally, turned out to not exist). At this private viewing, Blood knocked out Talbot, smashed the jewels into pieces and threw the shards into his pockets, hoping to make a run for it. Though he didn’t manage to escape, he did manage to escape jail time: The King at the time was so amused by this failed attempt that he let Blood off scot-free.

And that’s just the start of it. Plastered with gorgeous photography and big, sleek pages, Heist looks as good as it is captivating. Crack the code of the world’s most elusive capers, from the popular tales your great grandad told you about to the ones that have been long forgotten.

Pete Stegemeyer is an award-winning comedian, writer, and physical and cyber security expert. Before becoming a comedian and writer, Pete served in the United States Army and deployed twice to Afghanistan. He is also the host of the popular true crime podcast, I Can Steal That! and is one of Reddit’s most upvoted comedians of all time. When Pete isn’t working on research for his creative projects, he enjoys traveling the world with his wife, Christina, or walking around New York City with his two pugs.

An Inside Look at the World's 100 Greatest Heists, Cons, and Capers (From Burglaries to Bank Jobs and Everything In-Between)

By Pete Stegemeyer
LIST PRICE $29.95
PRICE MAY VARY BY RETAILER