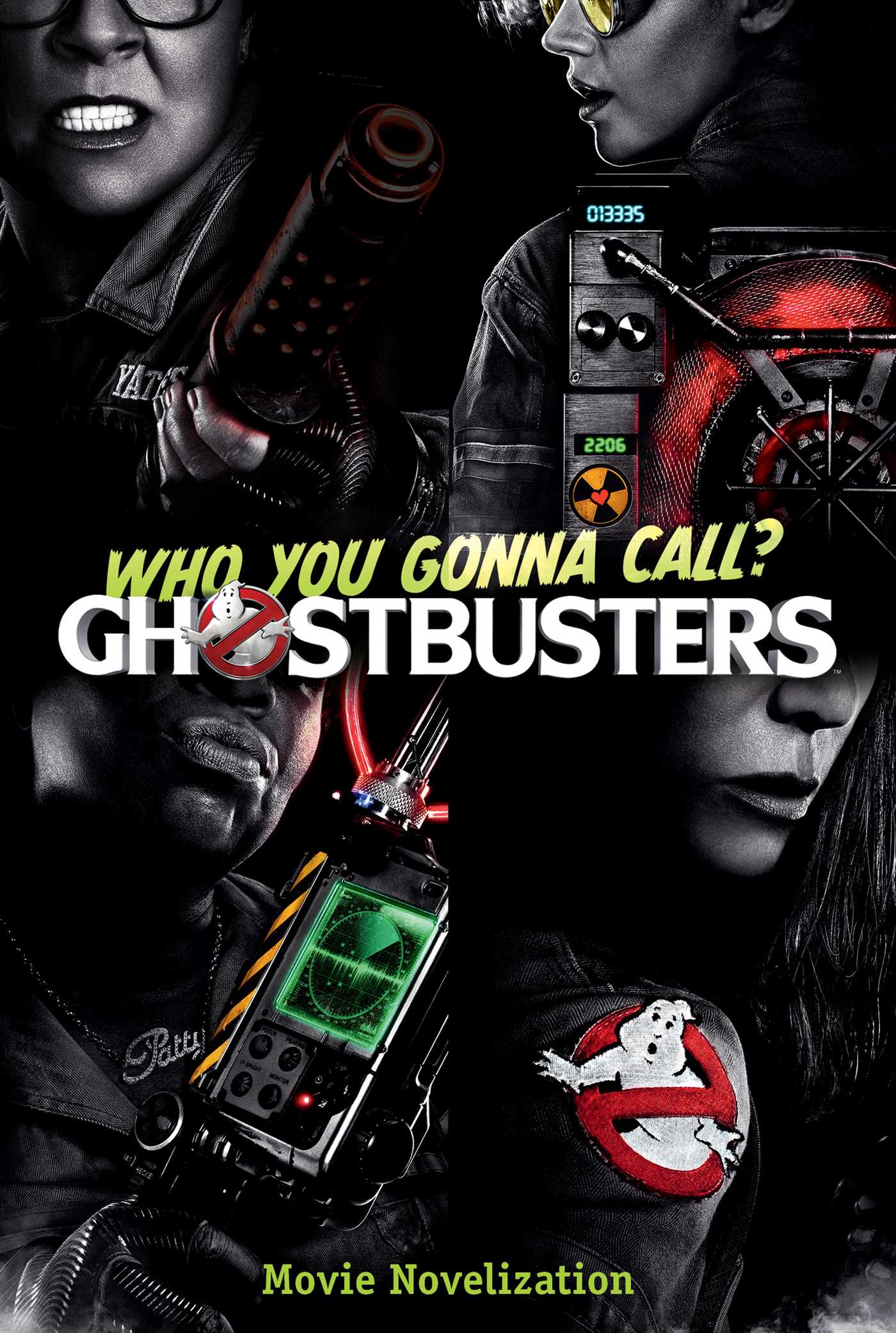 If there’s something strange in your neighborhood, who you gonna call? Ghostbusters!

Strange things have been happening in New York City. Mysterious ectoplasm has been oozing down walls, haunted figures are bursting out of locked rooms, and—rumor has it—a supernatural superfan wreaked havoc at a recent rock concert! Luckily there’s a group that’s ready to take the lead and rid the city of its ghostly infestation—the Ghostbusters! Grab your proton packs and join the Ghostbusters in this hilarious, action-packed retelling of the all-new movie that features an eight-page, full-color, glossy insert with images from the film!

Ghostbusters Movie Novelization CHAPTER 1
Erin Gilbert was getting dressed for her day. The TV in the corner was playing a familiar song. It was the opening to a ghost-chasing reality show called Ghost Jumpers. Erin gave a sarcastic snort as the show’s intense yet cheery host walked down the dark hallway of an abandoned mental ward.

“Who you gonna call? Ghost Jumpers!” The host introduced the program, adding, “Tonight on Ghost Jumpers we are locking ourselves into this abandoned mental ward for seven days straight, only allowing ourselves out to eat, sleep, and run general errands—”

Erin straightened her skirt and blouse. She checked her hair in the mirror. Once she determined that she looked respectable, she made a face at the TV.

“Uch. So stupid,” Erin said, turning it off.

She opened her closet where several similar-looking plaid blazers hung in a neat row. She chose one and put it on, glancing in the mirror one last time. Yes. Respectable.

Erin grabbed her messenger bag and left the apartment.

On the front lawn of the Columbia University campus, students sat outside debating what they’d learned. Erin walked proudly through the school, nodding at a few colleagues as she passed by. She was happy. This was her dream job.

Inside Alumni Hall, members of the academic elite milled about in conversation. Erin ran a hand over the dark polished wood. She belonged here. She was respected here.

Her boyfriend, Phil Hudson, saw her come in. “Erin. Sweetheart,” he said.

There was an awkward miscommunication—was Phil was going to kiss her on the lips or cheek?—but Erin was used to awkward. She brushed off the incident and allowed him to lead her across the faculty lounge.

“Did you hear?” Erin asked Phil. “I’m lecturing in the big hall today.”

“Darling, that’s wonderful.” He took in her shirt, blouse, and jacket. “That’s what you’re wearing?”

Erin felt a little rattled by his question. “What? Why?”

Phil shook it off. “No, you look fine. I have someone I want you to meet.” A stuffy looking woman didn’t smile as they approached.

“Phyllis Adler, I’d like to introduce you to Erin Gilbert. She specializes in theoretical particle physics.” Phil stood between the two women. He told Erin, “Phyllis is guest lecturing in Daniel’s Astrophysics and Cosmology today.”

Phyllis, however, shook her head. “I don’t allow my lab to submit to journals anymore. I think that journals tamper with the process and ultimately hurt scientific research.”

Erin struggled with how to respond. “Yes, that’s true,” she said, no longer smiling. “I was conflicted about the whole thing.”

“It becomes more about the splash than good science,” Phyllis replied. “They’re completely self-serving, and the effects on science are nocuous.”

Erin said, “I see what you’re saying. It’s like when scientists get caught up in winning some dumb award—”

“It’s unfortunately the only way you can draw attention to good science,” Phyllis said.

“That’s an excellent point.” Erin checked her watch. “Well, I better get going. Lecturing in the big hall today. Give my ideas room to really spread their wings.” She laughed, but Phyllis remained stone-faced.

When Erin turned to say good-bye to Phil, it was another awkward miscommunication and instead of kissing his cheek, she kissed his shoulder.

“Good luck on your tenure review!” Phil said, not seeming to notice the not-quite-a-second-kiss incident.

“Thank you. Fingers crossed,” Erin said. “Not that there’s anything to crossing your fingers, of course.”

“I couldn’t disagree more,” Phyllis said. “It’s been proven that superstitions can have a tremendous performance benefit.”

After a quick walk across campus, Erin took her place at the front of a large modern lecture hall.

An older man entered the room and stopped behind her.

“Aahhh!” Erin screamed when she discovered him there. Trying to regain composure, she picked up a file as if she’d been reading it all along. “Yes?”

“I’m sorry for interrupting,” the man said. He introduced himself as Ed Mulgrave. “I need to speak with you about something you wrote.”

Erin began to pack up her things. “All right. Which publication?”

“I’m talking about your book,” he said.

Erin froze for a second, then played it off. “I’m not sure what you mean.”

“You’re Erin Gilbert?” He held up a thick tome and read the title. “Co-author of Ghosts from Our Past: Both Literally and Figuratively: The Study of the Paranormal.”

Erin continued to pack up. “I’m sorry, that must be a different Erin Gilbert.”

Ed squinted at the photo inside the flap. “This really does look like you—” He turned the book toward her, then raised it next to her face.

Erin batted his hand away. “Listen, Mr. Mulgrave. That book was just sort of a joke. No self-respecting scientist really believes in the paranormal. That was a long time ago, just a gag between two friends.”

Ed weighed the book in his hands. “A four-hundred-and-sixty-page gag?”

“I’m the historian at the Aldridge Museum, and I believe it’s haunted,” Ed told her.

“Don’t you give ghost tours? Isn’t that the whole point?” Erin slipped her bag over her shoulder for a quick getaway.

“Yes, but that’s just for fun. And ticket sales,” he admitted. “But this has never happened before. It scared my tour guide nearly to death. Can you just take a look? I tried the police, but I sound crazy.”

“I’m sorry, but that book you’re holding is nonsense,” Erin replied. “I don’t know how you found it anyway. I thought I burned both copies.”

Erin’s eyes registered both shock and rage as she took in that information. She tried to hide her feelings. Very slowly she said, “Is it now?”

The instant she was alone, Erin booted up the computer in her office. She clicked on the book link.

It was on Amazon.com. Underneath the title were two names: hers, and the other author’s, Abigail L. Yates. A big picture of Erin filled the screen with the words “Ghosts are Real!” above her head in huge letters.

Erin would have exploded in anger if there hadn’t been a knock at the door. It was the head of her department, Harold Filmore, coming into the small room.

“What?” She quickly rotated the monitor away from him. “Yes. How is your day faring?”

“Erin . . .” Filmore was always serious. “We’re set for the final review of your tenure case on Thursday, but I saw that you had a recommendation letter from Dr. Brennen at Princeton.” He looked appalled. “Their science department just isn’t what it used to be. I’d consider getting a referral from a more prestigious school.”

Erin furrowed her brow. “More prestigious than Princ—?” She stopped herself from arguing. “Yes, of course. I can’t believe I almost did that.”

“I think you are an asset to modern physics and I’d hate to see you throw it down the drain.” Filmore turned to leave, taking a last look at Erin before he exited. “Oh, and about your clothes.”

He stared at her for a moment, then said, “Never mind.”

The instant he was gone, she turned back to the computer. “Abigail L. Yates,” Erin read aloud, glancing at the biography. “?‘Abigail continues her passion for the study of paranormal at the Kenneth P. Higgins Institute of Science.’?” She grunted. “Ooof.”