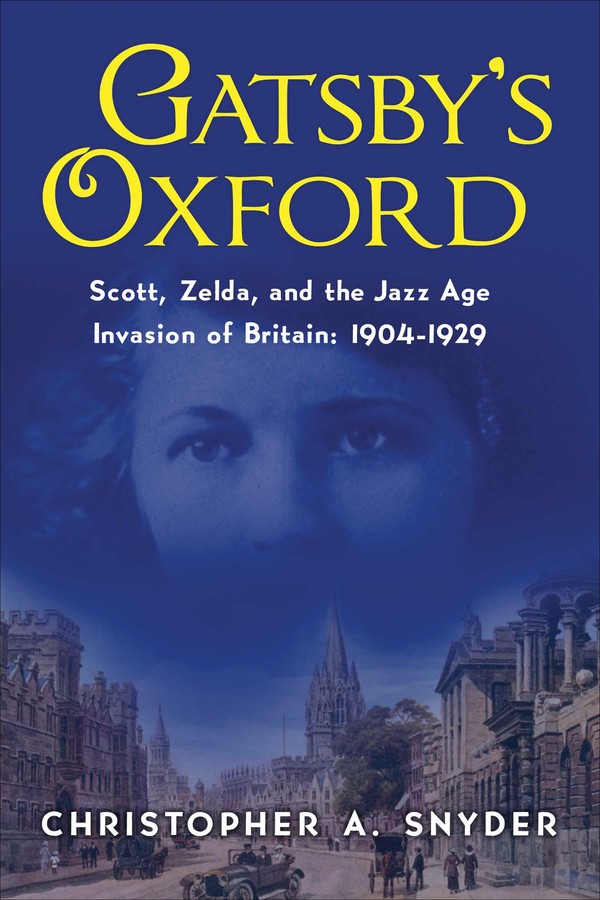 By Christopher A Snyder
Published by Pegasus Books
Distributed by Simon & Schuster
LIST PRICE $18.99
PRICE MAY VARY BY RETAILER

The story of F. Scott Fitzgerald's creation of Jay Gatsby—war hero and Oxford man—at the beginning of the Jazz Age, when the City of Dreaming Spires attracted an astounding array of intellectuals, including the Inklings, W.B. Yeats, and T.S. Eliot.

A diverse group of Americans came to Oxford in the first quarter of the twentieth century—the Jazz Age—when the Rhodes Scholar program had just begun and the Great War had enveloped much of Europe. Scott Fitzgerald created his most memorable character—Jay Gatsby—shortly after his and Zelda’s visit to Oxford. Fitzgerald’s creation is a cultural reflection of the aspirations of many Americans who came to the University of Oxford.

Beginning in 1904, when the first American Rhodes Scholars arrived in Oxford, this book chronicles the experiences of Americans in Oxford through the Great War to the beginning of the Great Depression. This period is interpreted through the pages of The Great Gatsby, producing a vivid cultural history. Archival material covering Scholars who came to Oxford during Trinity Term 1919—when Jay Gatsby claims he studied at Oxford—enables the narrative to illuminate a detailed portrait of what a “historical Gatsby” would have looked like, what he would have experienced at the postwar university, and who he would have encountered around Oxford—an impressive array of artists including W.B. Yeats, Virginia Woolf, Aldous Huxley, and C.S. Lewis.

Christopher A. Snyder is the Founding Dean of the Shackouls Honors College at Mississippi State University and Professor of European History. He is also a Visiting Research Fellow at the University of Oxford. He is the author of eight books, including The Making of Middle-earth: A New Look Inside the World of J.R.R. Tolkien, following seven years of research at Oxford, where he has lectured American honors students since 2007. Dr. Snyder also lectures frequently at the Smithsonian Institution and has appeared on the History Channel, Discovery, the National Geographic Channel, and the BBC. He lives in Starkville, Mississippi. For rights inquiries, please contact Christopher Snyder's literary agent: Mark Gottlieb Literary Agent Trident Media Group mgottlieb@tridentmediagroup.com (212) 333-1506 https://www.tridentmediagroup.com/?

"Entertaining and informative. [Snyder’s] work of popular scholarship reminds us that The Great Gatsby more than lived up to Fitzgerald’s initial intention to ‘write something extraordinary and beautiful and simple.’"

"Snyder vividly recreates the people and places Gatsby might have encountered during his brief stay there, in 1919. Snyder’s captivating study offers a fresh reading of Fitzgerald’s masterpiece as a novel about the American Dream, wrapped in medieval colors."

"A triumphal tour de force of intellectual, cultural, biographical, and emotional historicism, Dr. Snyder accomplishes the rarest of reading pleasures. Epic and yet page-turner spritely, Gatsby’s Oxford transports the reader to the most enchanting, enduring, and unique artistic slice of life at the sui generis institution, populated with transformative Great Thinkers."

"Christopher Snyder explores our enduring fascination with Oxford, the ‘City of Dreaming Spires,’ through the lens of F. Scott Fitzgerald and his iconic fictional alter-ego, 'Oxford man' Jay Gatsby. Skillfully weaving biographical and literary excerpts, Snyder offers fresh insights into Scott Fitzgerald and the pre-WWI Oxonian literary giants who inspired him—from Shelley and Yeats to Ruskin to Wilde. A fascinating look at the impact of one remarkable place and its medieval and Romantic traditions on the imagination and literature of Britain and the United States."

"Snyder exhaustively uncovers the lives, longings, and enchantments that gave the world Gatsby. This is a must read for anyone interested in how western culture renewed itself in the wake of the unfathomable horrors of the Great War."

"This is a deeply researched, highly detailed, and scholarly historical study in which Christopher Snyder has explored F. Scott Fitzgerald's literary creation, in his most celebrated novel, of Jay Gatsby in Oxford. He has done so against the historical background of the first quarter of the twentieth century—a period stretching from the beginning of the Oxford Rhodes Scholar program, through the horrors of World War I to the end of Prohibition, the Jazz Age—when Scott Fitzgerald, T. S.  Eliot, and many other leading American literary and intellectual figures came to, and were enchanted by, Oxford, the City of Dreaming Spires, a period and ambience which Dr. Snyder describes and evokes so vividly in these pages."

By Christopher A Snyder
Published by Pegasus Books
Distributed by Simon & Schuster
LIST PRICE $18.99
PRICE MAY VARY BY RETAILER