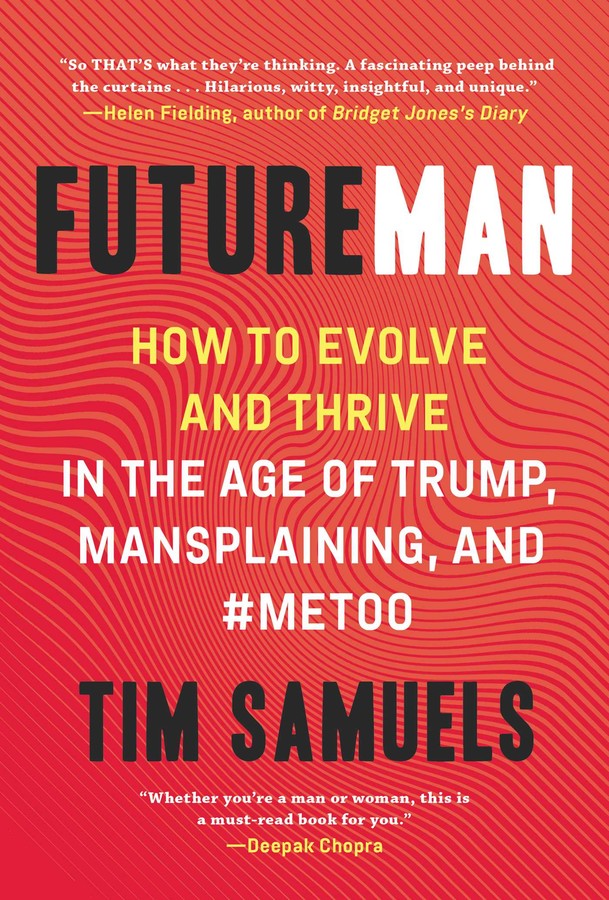 A sharply intelligent, explosively honest, and laugh-out-loud funny look at the state of masculinity and how to be a man, for fans of Jon Ronson and Matt Haig.
If ever there was an urgent need for a frank understanding of what's going on with men, it is now. Male rage and frustration have driven resurgent populism, mass shootings, and epidemics of addiction and violence. Powerful men who have abused their positions for decades have been and are being #MeToo–outed and dismissed. The patriarchy, that solid bedrock of male power for thousands of years, seems to be crumbling.

In Future Man, with his characteristic intelligence and humor, Tim Samuels assesses the state of contemporary manhood, its conflicts, confusions, and challenges. Trapped in bodies barely changed since cavemen days, men are contending with the stresses of corporate culture, lifelong commitment, rampant depression, and crazy expectations to be successful at work and at home. But how can you hunt and gather in an open-plan office? Why do men make up to 95 percent of Fortune 500 CEOs yet 93 percent of the prison population? Why do men commit suicide at more than three times the rate of women?

Tim Samuels is an award-winning documentary filmmaker, broadcaster, and journalist. He won three Royal Television Society awards and best documentary at the World Television Festival as well as the “Making a Difference” award at the Mind Media Awards for his work on mental health. He created the BBC Radio 5 call-in show Men’s Hour and has been a host for eight years. He recently became a correspondent for National Geographic Channel’s Explorer, based out of New York, and he contributes to such US publications as GQ, New York Times Magazine, and Huffington Post. He lives in London.

"So THAT’S what they’re thinking. A fascinating peep behind the curtains . . . Hilarious, witty, insightful, and unique."—Helen Fielding, author of the Bridget Jones series

"Hilarious . . . Samuels is an excellent guide and analyst. He also strives to be solutions-oriented in discussing fatherhood, dating, mental health, aging, gender roles, and other very sensitive topics (for men)."—Foreword Reviews

“Whether you’re  a man or woman, if you’re interested in understanding the current confused, paradoxical, conflicted state of the human male and his future evolution (and who is not?), then this is a must-read book for you.“—Deepak Chopra

"I laughed a lot. And cried some, but only on the inside. Which is where a man cries."—David Duchovny

"Tim Samuels knows it isn't always easy to be a man. In a disarmingly honest and funny way, he sets about revealing and challenging many of the ways men now find themselves living - taking on everything from war, religion and pornography, to fatherhood and relationships. The book is important as well as charming: something for many men, and as importantly women, to read, learn and be consoled by. "—Alain de Botton

"Insightful, funny, and honest . . . A great guide not to Real Man but to real men."—David Baddiel, comedian, television presenter, and bestselling novelist

"A soul-baring attempt to figure out what it means to be masculine."—Louis Theroux, filmmaker and author of The Call of the Weird: Travels in American Subcultures

"Pick of the Month."—Vanity Fair (UK)

"A highly entertaining book on how to be a man in the 21st century . . . Should be required reading for every Jewish prince. "—Times of Israel

"Not talking about masculinity is absolutely a symptom of our weird gender binaries. We should definitely talk about it more freely and not feel like it is always going to be some huge fight. "—Andi Zeisler on Future Man, as quoted in The Cut

"The mantra of the book for me was male honesty and candor, no matter how uncomfortable that might be for me, or make me look a bit vacuous or superficial at times. "—Tim Samuels, as quoted in the Times of Israel

“Thanks for letting me know I’m not the a**hole that I often think I am. Tremendous work.”—Steve on Twitter