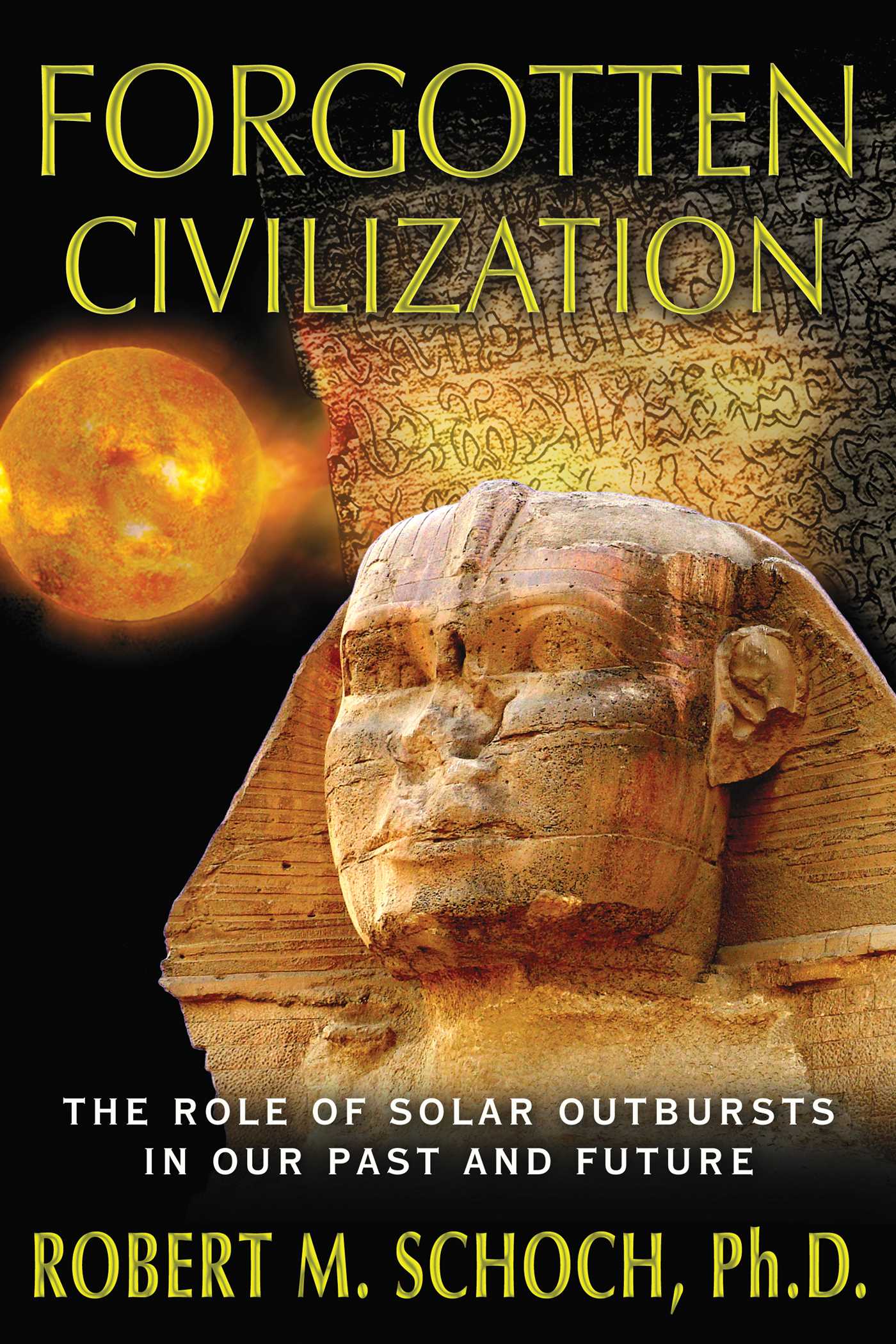 The Role of Solar Outbursts in Our Past and Future

Scientific confirmation of advanced civilization at the end of the last ice age, the solar catastrophe that destroyed it, and what the evidence
means for our future

• Demonstrates, based on the 12,000-year-old megalithic complex of Göbekli Tepe, that advanced civilization extends thousands of years further back than generally acknowledged

• Examines the catastrophic solar outbursts that ended the last ice age, wiping out antediluvian civilization and incinerating much of the evidence of that period

Building upon his revolutionary theory that the Sphinx dates back much further than 2500 BCE, geologist Robert Schoch reveals scientific evidence of advanced civilization predating ancient Egypt, Sumeria, and Greece, as well as the catastrophe that destroyed it nearly 12,000 years ago and what its legacy can teach us about our own future.

Combining evidence from multiple scientific disciplines, Schoch shows how the last ice age ended abruptly in 9700 BCE due to coronal mass ejections from the Sun. These solar outbursts unleashed electrical/plasma discharges upon Earth and triggered volcanic activity, earthquakes, fires, and massive floods as glaciers melted and lightning strikes released torrential rains from the oceans. He explains how these events eradicated the civilization of the time and set humanity back thousands of years, only to reemerge around 3500 BCE with scattered memories and nascent abilities. He explores within this framework, how many megalithic monuments, underground cities, and ancient legends fall logically into place, as well as the reinterpreted Easter Island rongorongo texts and the intentional burial, 10,000 years ago, of the Göbekli Tepe complex in Turkey. Schoch reveals scientific evidence that shows how history could repeat itself with a coronal mass ejection powerful enough to devastate modern society.

Weaving together a new view of the origins of civilization, the truths behind ancient wisdom, and the dynamics of the planet we live on, Schoch maintains we must heed the megalithic warning of the past and collectively prepare for future events.

How could I say no? The Chilean ambassador to the United Arab Emirates had invited Katie (Catherine E. Ulissey, my fiancée at the time) and me to not only visit him and his family in Santiago but also to join him on a short expedition to Easter Island (which has been Chilean territory since its annexation in 1888). This little spec of land is virtually synonymous with ancient mysteries, and it was a definite on my list of “must see” destinations. . .

Trying to make sense of the world is what drives me. I try not to readily accept simple pat answers uncritically. Studying so-called ancient mysteries, I have found that sometimes they are not quite so mysterious as they might initially seem. Sometimes data is misinterpreted (and, to put it bluntly, at times outright fraud is involved), while in other cases conventional and mainstream explanations serve to obscure and gloss over what are, in fact, genuine mysteries. . .

In the case of Easter Island, it quickly became apparent to me that the standard archaeological explanations were fundamentally flawed. These explanations include the assumptions that the island was first colonized by Polynesians about 1,500 years ago and that they were the ones who erected the gigantic stone heads called moai, carved the petroglyphs, constructed the strange, associated stone houses, and, in the process, brought ecological devastation to their tiny island such that it was a poor and impoverished people whom the Europeans first encountered in 1722.

I am a trained geologist (Ph.D. in geology and geophysics from Yale University, 1983) and, studying the varying levels of weathering and erosion and the degree of sediment built up around the moai (some that have been excavated were buried in up to six meters of sediment), I quickly became convinced that the standard story was improbable, to say the least. The high levels of sedimentation around certain moai suggested a much greater age than a mere 1,500 years. . . Was the carving of the moai--perhaps ostensibly as part of an ancestor cult--really just “busy work” thought up by the chiefs and leaders as a way to keep the masses occupied and happy, so as to bond the elements of society together and avoid social turmoil? And what was the purpose of the low, thick, stone “houses” that oddly resemble modern bunkers or fallout shelters? Why did the indigenous people sometimes occupy the natural caves of the island? What about the stories of giants inhabiting the island in past times? . . .

Perhaps most mysterious of all, what was the meaning of the undeciphered glyphs known as rongorongo texts? Was the rongorongo simply an indigenous eighteenth-century imitation of European writing? If this was indeed the case, then the rongorongo texts would be stripped of any antiquity, being a few centuries old at most, and would have little significance--a mere childish attempt by the “primitive” Easter Islanders to emulate the superior Westerners. . .

One day during our trip to Easter Island, we visited El Museo Antropológico Padre Sebastián Englert, where many fantastic, and I would add somewhat inexplicable, artifacts from the island are housed, including a strange, alien-looking small female moai carved of basalt. Then, our bags already packed, it was off to the airport to catch a 2 p.m. flight to Santiago. In Santiago we transferred to a flight bound for New York City and from there caught our flight to Boston, Massachusetts, arriving home on the afternoon of January 6, 2010. . .

One evening shortly thereafter, my mind still racing from all I had seen on Easter Island--and perplexed at the genuine enigmas and disgusted by the conventional explanations (or should I say non-explanations)--Katie suggested that we re-watch a video titled Symbols of an Alien Sky (Talbott 2009). One portion of the video discusses the work of Dr. Anthony L. Peratt, a plasma physicist associated with Los Alamos National Laboratory (New Mexico) who became interested in ancient petroglyphs (Peratt 2003).

I already knew of Peratt’s work and, indeed, had met him at a conference many years earlier. In a nutshell, Peratt noticed that many petroglyphs found around the world appear to record the shapes that would be seen in the sky if there were a major solar outburst--a plasma discharge (ionized particles and associated electrical and magnetic phenomena)--in ancient times. If our Sun discharged a huge ball of plasma toward us, it would have dire consequences for Earth, including life and humanity, as the surface of the planet would be literally fried by the incoming electric currents. Nothing like this has been seen in modern times, although small plasma discharges, known as coronal mass ejections (CMEs) are a regular feature of the modern Sun. However, as a geologist I was aware that going back in time the Sun has had periods of much higher activity, including at the end of the last ice age (circa 9700 BCE). Peratt and his colleagues postulated a major solar outburst in ancient times, but they did not specify a precise date or dates. They also had not considered one other very important thing.

Katie’s simple but profound observation while we watched the documentary was that the rongorongo glyphs look remarkably similar to the petroglyphs that Peratt believes record plasma discharges and configurations, due to a major solar outburst, seen in the ancient skies. Could the rongorongo be a text, a scientific text if you will, that records in meticulous detail what was happening in the skies long ago? Were the Easter Islanders in fact the keepers of an ancient, long forgotten, knowledge?...
Robert M. Schoch

“Schoch is a true scientist, following the data wherever it leads, heedless of political pressures or worn-out paradigms. Twenty-two years ago, his redating of the Sphinx launched the New Archaeology. Forgotten Civilization distills all that has happened since into a simple conclusion: that solar activity ended the last cycle of high culture and may destroy ours in turn. Schoch is no scaremonger, no hawker of a pet theory. What we do with this knowledge is up to us, but once digested, it changes everything.”

– Joscelyn Godwin, author of Atlantis and the Cycles of Time

“Dr. Robert Schoch has produced an extremely well-studied thesis that is backed by his vast knowledge of geology and, more importantly, given the thesis impetus by his courage to go where many other academics fear to tread. Forgotten Civilization is a very well written book that not only reflects an excellent scientific research into the origins of civilization but also is highly entertaining and most enjoyable to read. Get this book and put it in a prominent place on your bookshelf. It deserves this honor.”

“Schoch’s well-founded conclusion is that mankind’s past on this planet is not only much older than what conventional historians have been teaching, but, as Paul LaViolette has demonstrated, we have gone through cycles of destruction and renewal corresponding to periods in and between coronal mass ejections (CME’s) and solar proton events (SPE’s) of our Sun.”

“...it is pleasing, and in some ways a relief, to read a book in this field that has been written by an author with the qualifications to back up his theories...”

The Role of Solar Outbursts in Our Past and Future