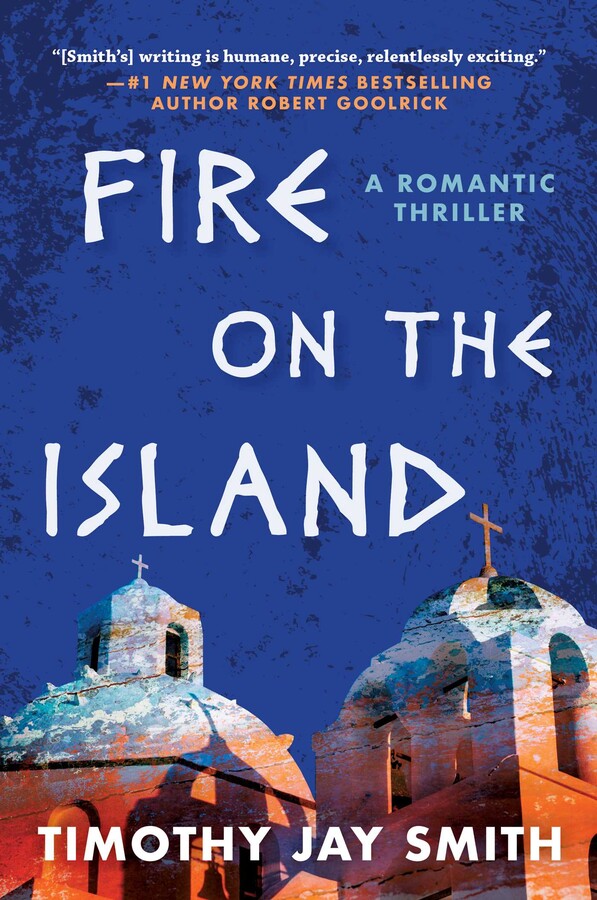 For lovers of crime fiction and the allure of the Greek islands, Fire on the Island is the perfect summer read.

FIRE ON THE ISLAND is a playful, romantic thriller set in contemporary Greece, with a gay Greek-American FBI agent, who is undercover on the island to investigate a series of mysterious fires. Set against the very real refugee crisis on the beautiful, sun-drenched Greek islands, this novel paints a loving portrait of a community in crisis. As the island residents grapple with declining tourism, poverty, refugees, family feuds, and a perilously damaged church, an arsonist invades their midst.

Nick Damigos, the FBI agent, arrives on the island just in time to witness the latest fire and save a beloved truffle-sniffing dog. Hailed as a hero and embraced by the community, Nick finds himself drawn to Takis, a young bartender who becomes his primary suspect, which is a problem because they’re having an affair. Theirs is not the only complicated romance in the community and Takis isn’t the only suspicious character on the island. The priest is an art forger, a young Albanian waiter harbors a secret, the captain of the coast guard station seems to have his own agenda, and the village itself hides a violent history. Nick has to unravel the truth in time to prevent catastrophe, as he comes to terms with his own past trauma. In saving the village, he will go a long way toward saving himself.

A long time devotee of the Greek islands, Smith paints the setting with gorgeous color and empathy, ushering in a new romantic thriller with the charm of  Zorba the Greek while shedding bright light on the very real challenges of life in contemporary Greece.

Tim has traveled the world collecting stories and characters for his novels and screenplays which have received high praise. Fire on the Island won the Gold Medal in the 2017 Faulkner-Wisdom Competition for the Novel. He won the Paris Prize for Fiction for his first book, A Vision of Angels. Kirkus Reviews called Cooper’s Promise “literary dynamite” and selected it as one of the Best Books of 2012. Tim was nominated for the 2017 Pushcart Prize for his short fiction, "Stolen Memories." His screenplays have won numerous international competitions. Tim is the founder of the Smith Prize for Political Theater. He lives in France.

In Praise of Fire on the Island:

"Fire on the Island is an unpredictable, unconventional thriller. A gay FBI agent who goes undercover to trace the arsonist terrorizing a Greek village once inhabited by Turks digs up roiling ethnic tensions, festering homophobia, and family secrets. Smith, clearly familiar with his setting, paints his island with vivid color and populates it with complex and compelling characters." —Jennifer Steil, author of Exile Music and The Ambassador's Wife

“I read Fire on the Island in one sitting. Smith’s prose is fast-paced, the dialogue is crisp, and the characters are well-drawn in a breathtaking setting. I highly recommend this book.” —Hasan Namir, author of God in Pink and War/Torn

"The characters of the small Greek island of Vourvoulos are the stars in Timothy Jay Smith’s compulsively readable mystery Fire on the Island. Athens-based FBI legal attaché Nick Damigos has come to Vourvoulos to investigate a series of dangerous fires, which may be connected to the flood of illegal immigrants arriving from Turkey in rafts and leaky boats. What he finds is an island full of old secrets dating back to the days when island-based Turks were forced to return to Turkey, leaving behind homes and farms. And in the present, islanders are keeping secrets, primarily sexual ones. Even the most casual of characters come alive, from the handsome priest with a trade in fake icons to the Albanian waiter desperately in love with his boss’s daughter. That’s Smith’s greatest talent—in addition to a page-turning plot, he makes the lives of these people on this tiny rock in the Aegean meaningful to us." —Neil Plakcy, author of the award-winning Mahu Investigations

"Fire on the Island is an unpredictable, unconventional thriller. A gay FBI agent who goes undercover to trace the arsonist terrorizing a Greek village once inhabited by Turks digs up roiling ethnic tensions, festering homophobia, and family secrets. Smith, clearly familiar with his setting, paints his island with vivid color and populates it with complex and compelling characters." —Jennifer Steil, author of The Ambassador's Wife

In Praise of The Fourth Courier:

"…riveting... What a great story — sad, humane, relentlessly exciting. I hope there’s another novel…talents must be used to their fullest. …At the very start of Timothy Jay Smith’s The Fourth Courier, we know we are in for a furious, riveting ride. His writing is humane, precise, relentlessly exciting. I dare you to read the opening and not want to race to the finish in one tightly held breath." –#1 New York Times bestselling author Robert Goolrick

"… riveting and irresistible. Smith, with his natural-born ear for dialogue and eye for description, drops us right into the narrative and the moment he does we’re as much a part of the Polish landscape as the characters themselves. You’re going to want to read The Fourth Courier for its arresting plot, but you’ll remember it for the crisply wrought and indelible images of a Poland on the brink of change." -- David Samuel Levinson, Pulitzer Prize nominated author of Tell Me How This Ends Well

“The Fourth Courier is well-plotted with murders, crosses, and double-crosses enough to snag any reader’s interest. Smith captures the late-winter gloom of Poland as well as the edgy nervousness of the 1990s post-Cold War uncertainty in the Communist bloc. As someone who grew up with parents who considered putting in a bomb shelter, The Fourth Courier played upon those uncertainties... it was action-packed from start to finish and kept me turning pages.” — Midwest Book Reviews

“The Fourth Courier is fast-paced and is sure to keep you guessing as to how deep the rabbit hole really goes.”—The Polish American Journal

"Though written with a more literary flair—the reader is deeply immersed in both character and setting—The Fourth Courier reads at an astonishingly fast pace, proving that Smith is also skilled at creating a riveting plot.”—The Big Thrill(200,000 UMV)

“Hold on to your hats for this is a snappy and speedy ride into the murky world of a post-Cold War Eastern Europe...Timothy Jay Smith has penned a gripping, intelligent thriller, atmospheric and effectively creating an uneasy picture of a Poland emerging from the last war...” —NB Magazine (UK)


“…one of those novels where we have no idea where it is exactly going to go, but we turn the pages with incredible rapidity! It’s a beautifully written novel.” — NPR affiliate, Wisconsin Public Radio, Greg Berg, WGTD-FM “The Morning Show”

“The book feels like it could have been ripped right out of today’s headlines!”— Peter Solomon, WIP-AM+FM/Philadelphia PA

“This is a page turner.” — Paul Miller, WPHM-AM/Port Huron MI

“The Fourth Courier is a really exciting international thriller with LGBT themes and characters…The dialogue is so rich and the setting is wholly realized." — Bookstr (Facebook Live: 17,000+ views)

“Timothy Jay Smith: remember this name. Smith is a craftsman, as demonstrated in this swift-paced and tightly organized tale of arms smuggling through Poland in April of 1992. It was written by Somebody Who Was There. The experience shows. Len Deighton and John Le Carré have a nephew… The Fourth Courier is a sexy book. Gay, straight, illicit, overtly illegal, romantic with the promise of spring somewhere near the horizon - it’s a bit of an amatory Coney Island. There is so little opportunity to escape the grey remains of Communism in Smith’s telling that, in a certain respect, The Fourth Courier will remind a reader of I AM A CAMERA, the basis for Broadway’s ‘Cabaret’…  This is a captivating thriller. It is complex, with tangled murders and double-crosses and double-crosses within double crosses, as one of the principal characters complains. Even though Smith allows us to see all the players in motion as the story unfurls, we are still feeling tension and apprehension for them trapped in the complex plot. Smith makes these people very real to us, and even the worst of the worst in the story somehow manages to elicit our sympathy before it’s over. Strongly recommended.” —Authors on the Air/Book Review Crew

“All the characters are distinctive and interesting, even the minor ones. There’s some steamy sex. And, the settings, from a drably elegant hotel favored by Mladic to a seedy bar in the bowels of the train station, to the wasteland near the river put you right in the scene.” — Crime Fiction Lover

"The characters are sharply depicted as the author allows readers to get their own take on each one’s flaws, strengths and abilities to find out what needs to be addressed to stop what someone has put in place... The ending lets readers know that there might be more in store for Porter as he has decisions to make concerning his own life with his children, how to deal with these feelings for Lilka and what might be next for them both. What do we learn about The Fourth Courier: Ask his wife! One powerful novel whose issues could be ripped right out of the headlines as one man’s passion and goals might take down nations if he succeeds.”
— Just Reviews/ “Blog Talk Radio”

"Brace for hot sex in surprising detail in this one, as FBI agent Jay Porter links up with a hot Polish airport worker with criminal connections, and Porter's CIA colleague Kurt Crawford turns the tables on the Russian general in a time when some sexual twists could mean far more danger and public shame than they do now. The writing's sharp and quick, the plot laced with unusual twists. And the portrait of cash-starved, impoverished Poland at that point is poignant and salted with very human affection." — Kingdom Books, Mystery Reviews