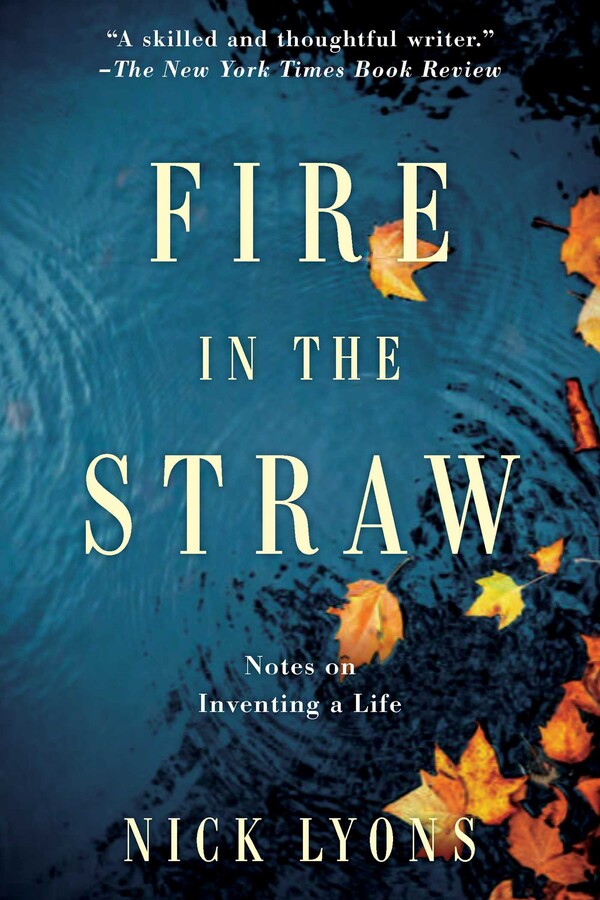 By Nick Lyons
LIST PRICE $24.99
PRICE MAY VARY BY RETAILER

FIRE IN THE STRAW is the witty and deeply felt memoir of Nick Lyons, a man with an intrepid desire to reinvent himself—which he does, over and over.

Nick Lyons shape shifts from reluctant student and graduate of the Wharton School, to English Professor, to husband of a fiercely committed painter, to ghost writer, to famous fly fisherman and award-winning author, to father and then grandfather, to Executive Editor at a large book publishing company, and finally to founder and publisher of his own successful independent press..

Written with the same warm and earthy voice that has enthralled tens of thousands of fly-fishing readers, Nick weaves the disparate chapters of his life: from the moment his widowed mother drops him off at a grim boarding school at the age of five, where he spends three lonely and confusing years; to his love of basketball and pride playing for Penn; to the tumultuous period, in the army and after, when he found and was transformed by literature; to his marriage to Mari, his great love and anchor of his life.

Suddenly, with a PhD in hand and four children, Nick embarks on a complex and thrilling ride, juggling family, fishing, teaching, writing, and publishing, the wolf always at his door. Against all odds, The Lyons Press survives, his children prosper, his wife’s art flourishes, and his books and articles make him a household name.

Fire in the Straw is a love story, a confessional, and a beautiful big-hearted memoir.

Nick Lyons is a former English professor and book publisher, as well as the author and editor of many books on various topics. He lives in New York City.

In Praise of Fire in the Straw:

"[Nick Lyons's] engaging version of his own Horatio Alger story....A moving account of a life of loves and accomplishment."––Kirkus Reviews

“The title of Fire in the Straw describes the spark that ignites a life of engagement. 'The old fire I found in me, that sustained me, is banked low,' he writes, 'but the orange coals are bright.' This brief but affecting memoir is proof enough of that." ––Wall Street Journal

“This gem of a book is destined to become a classic. With flawless style, Nick Lyons braids together the two archetypal passions that run like golden threads through his complicated life––love and fishing. First place goes to his late wife, the remarkably gifted painter Mari Lyons.  Their four-decade romance played out on the rough-and-tumble stage of Manhattan intellectual life. Earlier, we see how the author's Dickensian childhood in Brooklyn led him to Catskill streams and eventual renown as the master voice in American fly fishing literature. Fire in the Straw deserves an honored place on the short list of definitive New York memoirs.”––Howell Raines, former Executive Editor of The New York Times and author of Fly Fishing Through the Midlife Crisis

“If a book can be life altering, and they sure can be, then this is one of them. There is no mystery why Fire in the Straw is this way, since it is charming, moving, filled with stories, with looks at how things really are in the world, told with a voice I absolutely trust and admire. The item, above everything else, that a book like this provides is inspiration. What a life Nick Lyons has had, fisherman, publisher, father, and loving husband to his wife, and all of it told with a lovely humility, with humor, and with that rare sense of what really matters.” ––Craig Nova, author of The Good Son

“Nick Lyons has spent so many decades nurturing talent in others that it’s easy to overlook the enormous talent he brings to his own writing. His latest book, Fire in the Straw, is the compelling testament of a great editor, teacher, fly-fisher, and father, written in Lyon’s trademark style––lucid, personable, witty, and honest, and so compulsively readable you won't want this journey through a life to ever end.” ––W.D. Wetherell

“Nick Lyons, legendary American fly fishing author and publisher, has written a superb, bone-honest,  profoundly moving, deeply felt memoir revealing  a complex and multi-layered existence beyond the angling passions for which most of us know him. Fire in the Straw is a deft painterly narrative that evokes the ‘inscrutable texture’ of a life meaningfully, thoughtfully  lived at every turn. I cannot recommend it highly enough.” ––Robert DeMott, Edwin and Ruth Kennedy Distinguished Professor, Ohio University

“Fire in the Straw is brave, moving, above all honest.  From his Brooklyn childhood to the hallowed trout streams of Montana, Nick Lyons charts his wayward course to a fulfilling life.  His touch is light, his heart is generous––it’s a book to be treasured.” ––Bill Barich, author of Laughing in the Hills and Crazy for Rivers

“This exquisitely written memoir explores the sad distance between a boy and his mother, the absurd duties of the peacetime Army, the ecstasies of basketball and reading, a great marriage, money problems, hard work, New York, Montana, the publishing business, art, and the steady heat of a fire that won’t go out. This is a moving and beautiful story of a remarkable American life.” —Henry Hughes, Professor of Literature at Western Oregon University and author of Back Seat with Fish

“Nick Lyons is a master of literary non-fiction. Lavish with detail, and with humor most often turned on the narrator himself, his sentences brim with humanity. I believe he’s as vital to contemporary American prose as Philip Lopate or Margo Jefferson, Annie Dillard or John McPhee. Among his many superb collections, Fire in the Straw proves his most personal, and his most moving.” —Peter Campion, award-winning poet and author of El Dorado

“Throughout an unparalleled career of writing about fishing (just as, say, Melville wrote “about” whaling), Nick Lyons has proved himself one of our master narrators. Fire in the Straw is by turns witty, deeply moving, wry, melancholic, and often all these at once. It is also everywhere possessed of exactly the right turn of phrase. The book shows that mastery as clearly as anything this national treasure has ever written. Indeed, given that the subject is Lyons’s own life, the author provides us with the richest and most engrossing subject matter he has ever explored. If that is saying far more than a mouthful, still there is not an iota of fisherman’s exaggeration in my claim.” —Sydney Lea, Poet Laureate of Vermont (2011-15), and author of  A North Country Life

"Fire in the Straw wrecked me the way a great love-story does, never announcing itself as such, but keeping me in a state of fine suspense and hope. For who can say, from moment to moment, whether this trapped young boy will escape the dark hold of a family silence, and whether, as he grows up and discovers his heart’s surprising urgency for literature, rivers, and love, he will prevail against the forces that come to greet him—and all of us—along the radiant and perilous way? Nick Lyons may claim that he doesn’t understand his intense passion for the brown trout, but it is precisely this—his willingness to live, and write, among mysteries—that holds his readers in thrall." ––Marjorie Sandor, author of The Secret Music at Tordesillas

"This memoir is a testament to the power of artful, reflective writing where we witness a narrator’s  struggle (artistically and emotionally) to find out who he is. He presents the difficult question we all face: Shall I gauge my life by 'what I’ve done?' or by 'what and whom I’ve loved?'" ––Christine Hemp, author of Wild Ride Home

"Unfolding in richly textured prose--spare, beguiling, harrowing, funny, earthy, and reflective—Nick Lyons’ Fire in the Straw portrays his struggles to build a life with the same patience and artistry he brought to his battles to outwit and capture the Great Trout. I guarantee he will hook readers, too.”— Herbert Leibowitz, Editor & Publisher of Parnassus Press, and the author of Something Urgent I have Say to You, a biography of William Carlos Williams and Fabricating Lives, a study of American Autobiography and Style.

“There are lots of patches to this quilt. Lyons stiches them together in a tale of a good life with some very rough edges.” —John N. Maclean, author of Fire on the Mountain

"Within the pond of those who write about fly-fishing, Lyons is one of the bigger fish."––Publishers Weekly

"The world needs more of so generous a soul." ––Kirkus Reviews

"It is the tension, the uncertainty, this counting of trade-offs that gives his writing its considerable vitality, the tang of irony."––Thomas McGuane

"I love Nick Lyons's books. Every sentence is so full and ripe with whatever it is that keeps us fishing-and the minute-by-minute surprise and delight of it."––Ted Hughes, former Poet Laureate to Queen Elizabeth II and the author of Birthday Letters

"Nick Lyons is quite simply the tops, in stylish prose, gentle wit, and accumulated wisdom. Add his sense of humility and complete honesty-rare qualities among us fly fishermen-and you will begin to understand why Lyons' essays are essential to our sanity."––William W. Warner, author of Beautiful Swimmers

"Fly-fishing isn't a spectator sport, but if Nick Lyons fishes as skillfully as he writes about it, I'd payto watch him. He's that happy and compulsive combination of angler-poet-romantic, and his book is a joy."--Ed Zern

"A warm, nostalgic and yet enormously canny and rewarding book about those twin mysteries, fishing and fishermen."––Robert Traver

"There's one way to tell a Nick Lyons fan: just hand one of us a copy of Fly Fisherman magazine. It doesn't matter how huge the trout on the cover is, or what experts are holding forth in the feature articles, we'll turn to the back page and read Nick's column, 'The Seasonable Angler,' first. Over the past fifteen years it's become a sort of ritual-first the poetry of the sport, then the technique."--John Gierach

By Nick Lyons
LIST PRICE $24.99
PRICE MAY VARY BY RETAILER