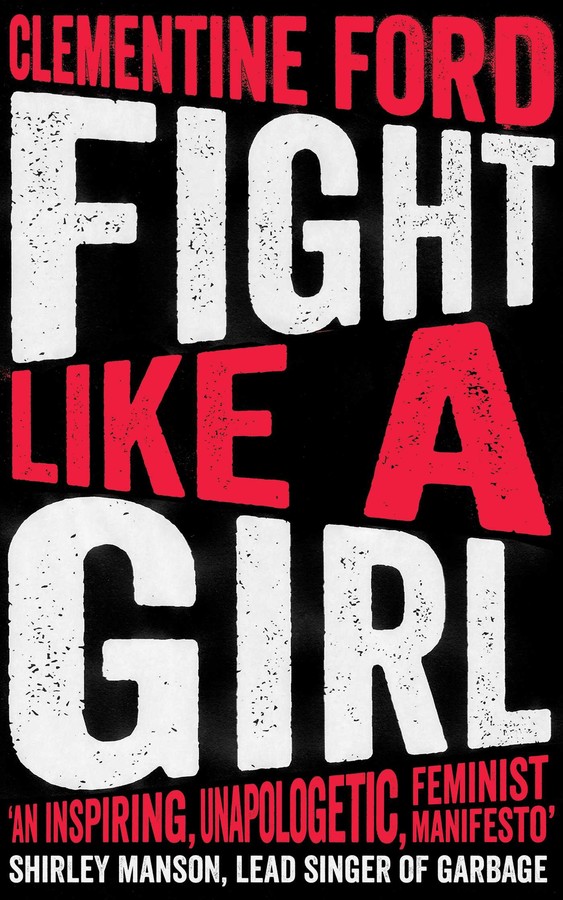 An incendiary debut taking the world by storm, Fight Like A Girl is an essential manifesto for feminists new, old and soon-to-be.

Online sensation and fearless feminist heroine, Clementine Ford is a beacon of hope and inspiration to thousands of women and girls. In the wake of Harvey Weinstein and the #MeToo campaign, Ford uses a mixture of memoir, opinion and investigative journalism to expose just how unequal the world continues to be for women.

Personal, inspiring and courageous, Fight Like A Girl is an essential manifesto for feminists new, old and soon-to-be. The book is a call-to-arms for women to rediscover the fury that has been suppressed by a society that, despite best efforts, still considers feminism to be a threat.

Urgently needed, Fight Like a Girl is a passionate, rallying cry that will awaken readers to the fact they are not alone and there’s a brighter future where men and women can flourish equally – and that’s something worth fighting for.

CLEMENTINE FORD is a writer, columnist, broadcaster and public speaker based in Melbourne, Australia

‘Her brilliant book could light a fire with its fury. It gets my synapses crackling and popping; I find I can’t sit down while reading it, so instead I pace the sitting room.’

‘There’s a wonderful book by Clementine Ford that I advise every woman, and especially young women, to read called Fight Like a Girl.’

'It's the wit and searing honesty of her own personal life laid bare where Fight Like a Girl truly shines.'

‘This rallying cry will persuade you to battle for true equality, not the fake news version.’

‘Clementine Ford was put on this earth to give courage to the young girl inside all of us. This is an exciting, essential book from Australia’s most fearless feminist writer.’

‘Required reading for all young women in Australia... Yes, Fight Like A Girl will make you angry. It will make you feel uncomfortable. But, ultimately, it will inspire you to create change.’

'Required reading for every young man and woman, a brave manifesto for gender equality, harm minimisation and self-care.’

‘An intimate, though universal, call to arms... Ford’s book is a galvanizing tour de force, begging women to never give up on the most radical act of all: loving themselves wholly and completely in a world that doesn’t love them back.’

‘[A] fun, frank and fearless feminist manifesto...anyone hoping for an introduction to the most pressing topics in identity politics would do well to brush up under Ford's tutelage.’

‘With just the right balance of sarcasm and straightforward, informational content, writer and broadcaster Ford’s first book is one people need to read in the wake of the MeToo movement… Ford’s quick, provocative read will appeal to anyone who desires a better understanding of the complex, intersectional issues so often lumped into phrases such as rape culture.’

'Brilliant...it makes me want to chain myself to a barricade.'

‘Fight Like A Girl is fuelled by Ford’s clear-eyed defiance and refusal to compromise, and by her powerful combination of personal testimony and political polemic. In the vein of Caitlin Moran’s How to be a Woman or Roxane Gay’s Bad Feminist.’

‘Clementine Ford was one of my very first formative feminist influences, initiating me into the world of feminism. She is someone whose tenacity and fearlessness I admire greatly, and she helped me along the path to becoming the humourless, bitter, lesbian feminist I am today.’

‘A beautiful, bittersweet journey to self-acceptance. A companion to all those still seeking to forge a sense of self. Clementine Ford has always been a bastion of shamelessness in a world that would rather see her defeated, and her book is a testament to the commitment she has to living fearlessly. I am comforted daily by her presence in the lives of young Australians, and I’m beyond thrilled that we now have her unique brilliance committed to these pages.’

‘Clementine is furious and scathing when she needs to be, yet compassionate and encouraging every moment she can be. This book is both a confirmation of sisterhood and a call to arms.’

'The past few years have been a watershed for the elimination of violence against women in Australia, and Clementine’s voice has not only been instrumental, but has taken up a mainstream space that has aligned with and reinforced the efforts of the women’s services sector. We love her for that.'

'An inspiring, unapologetic, feminist manifesto that highlights with great clarity and dispassion the global socio-economic disparities that continue to exist between men and women and suggests how we can set about changing the patriarchal status quo in order to build a fairer, more egalitarian society in which women can also flourish. It’s time to change the way we all think about gender. And by doing so, create a brighter future for all humans.'

‘The book I’ve been waiting for: an impassioned call to arms for girls of all ages.’

'With wit, insight and glorious, righteous rage, Clementine Ford lays out all the ways in which girls and women are hurt and held back, and unapologetically demands that the world do better. A passionate and urgently needed call to arms, Fight Like A Girl insists on our right to be angry, to be heard and to fight. It'll change lives.'