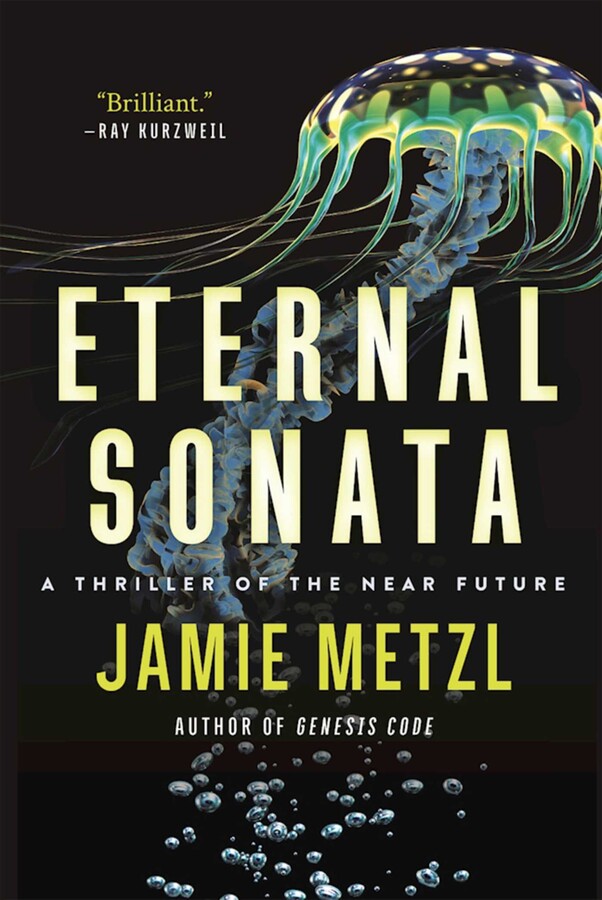 A Thriller of the Near Future

By Jamie Metzl
LIST PRICE $11.99
PRICE MAY VARY BY RETAILER

A few dead bodies are a small price to pay in the quest for immortality.

In 2025 America, it’s hardly news when a renowned octogenarian scientist dying of cancer disappears from a local hospice, but when Kansas City Star reporter Rich Azadian begins to dig, he discovers that other elderly scientists around the world have also vanished recentlyall terminally ill and receiving the same experimental treatment from a global health company. His investigation leads him to the reclusive Noam Heller, a brilliant researcher exploring new technologies to reverse-age cancer and other cells. Using revolutionary stem cell treatments and snippets of DNA from rare, immortal Arctic jellyfish, his breakthrough promises the genetic equivalent of the fountain of youth.

But when Heller is murdered and his lab destroyed, Rich and his girlfriend Antonia become targets themselves. With the local police and federal authorities failing to see the big picture, he realizes he must take matters into his own hands to survive and stop the killing. His only hope is to mobilize his network of brilliant misfits and infiltrate the vast and lethal raceamong cutthroat corporations, national intelligence services, rogue scientists, and a mysterious international organizationto control the new technologies and perhaps the secret of life itself.

Jamie Metzl is author of the novels Genesis Code and The Depths of the Sea. He is a Senior Fellow of the Atlantic Council and has served in the US National Security Council, State Department, and Senate Foreign Relations Committee, as Executive Vice President of the Asia Society, and with the United Nations in Cambodia. Jamie appears frequently on national and international media, and his writing on Asia, international relations, genetics, and other topics is featured regularly in publications around the world. He holds a PhD from Oxford and a JD from Harvard Law School and is a magna cum laude graduate of Brown University.

"Eternal Sonata is a brilliant exploration of the many challenges and opportunities our species will face as the exponential growth of real-world technology moves us toward immortality." —Ray Kurzweil, Inventor, Futurist, and author of The Singularity Is Near

"Eternal Sonata is a meditation on being human in an age when technology promises to change everything. It will pique your curiosity in science you never thought possible, and make your heart race with the twists and turns of a thriller. A fascinating, joyous read." —Debora Spar, President of Barnard College and New York Times bestselling author of Wonder Women: Sex, Power, and the Quest for Perfection

"Jamie Metzl has written a wonderful novel that imagines a future where real world scientific breakthroughs promise massive extension of the human lifetime and the quest for immortality becomes deadly. Filled with brilliant insights on science, philosophy, politics, and human relations, it is a nail-biting thriller with a driving plot that will grip you from the very first page." –Alan Dershowitz, Felix Frankfurter Professor of Law, Emeritus, Harvard Law School, and bestselling author of thirty-one books

“Eternal Sonata is an exhilarating, must-read thriller, set at the combustive intersection of technology and geopolitics. Like all great science fiction, it paints a disturbing future from entirely plausible facts.” —Fred Kempe, New York Times best-selling author of Berlin 1961 and President, Atlantic Council

"Genesis Code is both a high-octane thriller exploring what could happen if international politics drive the human genetic revolution and a compelling love story touching the core of what it means to be a good old-fashioned human being. Read this book and let the conversation about the future of our species begin." —Sanjay Gupta, CNN chief medical correspondent and New York Times–bestselling author

“Genesis Code is a highly original and thoroughly gripping account of a nightmare that may yet prove all too real. I read it in one sitting—I could not put it down. A thrilling tale written with heart-pounding authority.” —Kati Marton, author of the New York Times bestseller, Paris—A Love Story

"A spellbinding odyssey into our genetic future. Jamie Metzl is a supreme storyteller who entrances his readers with deep and surprising insights into science, politics, and the human condition." —Eric Garcetti, mayor of Los Angeles

“An old-fashioned hard-boiled thriller . . . Metzl knows his science, and the detail is elegantly done while the novel moves at a nonstop pace over 41 days. Metzl provides a believable look at a not-too-distant future where science, politics, religion, economics and the ability to report the "truth" are all inseparably bound together.” —Kirkus Reviews

“Metzl offers up a tense vision of the near future with this science fiction thriller.” —Publishers Weekly

"Metzl... has a strong command of the financial, political and bioethical questions at the heart of his fast-paced dystopian novel." —Washington Post

"The plot is stellar and well paced. . . . The science on the DNA enhancement research is fascinating. . . . Fans of sci-fi and mystery will definitely enjoy Genesis Code." —Portland Book Review

"Riveting...a real page-turner...a vivid, exciting and well-paced thriller...with a message:...that we must all learn to use wisely the scientific advances that our greatest geniuses uncover." —World Policy Blog

"Absorbing . . . At a time of increasing suspicion about potential secret interactions between governments, the ability of global corporations to influence events and the fear that science and technology will spin out of control and lead us into ethical quagmires, this book provides a well-informed, thrilling read just plausible—and somewhat scary—enough to be compelling." —Hadassah magazine

A Thriller of the Near Future

By Jamie Metzl
LIST PRICE $11.99
PRICE MAY VARY BY RETAILER