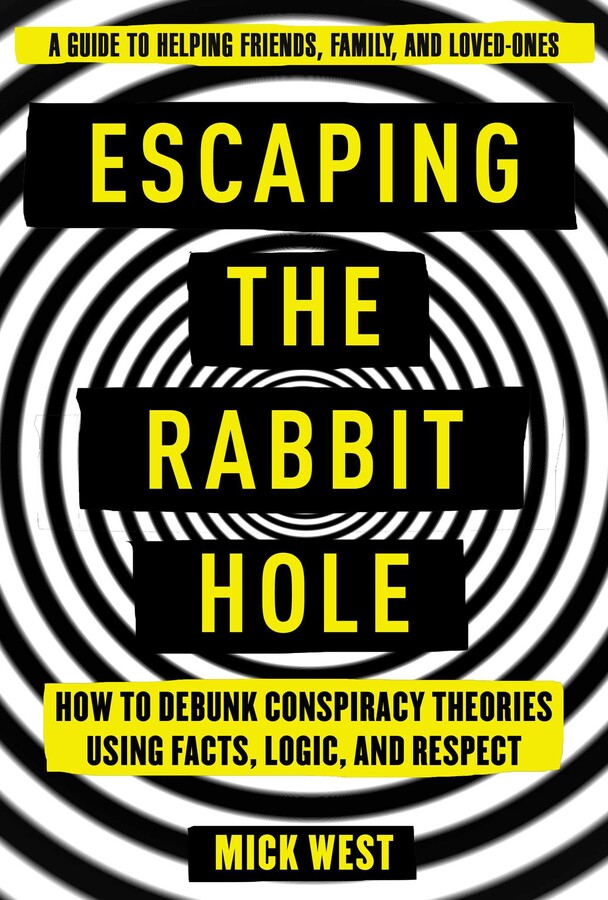 How to Debunk Conspiracy Theories Using Facts, Logic, and Respect

By Mick West
LIST PRICE $18.99
PRICE MAY VARY BY RETAILER

The Earth is flat, the World Trade Center collapse was a controlled demolition, planes are spraying poison to control the weather, and actors faked the Sandy Hook massacre….

All these claims are bunk: falsehoods, mistakes, and in some cases, outright lies. But many people passionately believe one or more of these conspiracy theories. They consume countless books and videos, join like-minded online communities, try to convert those around them, and even, on occasion, alienate their own friends and family. Why is this, and how can you help people, especially those closest to you, break free from the downward spiral of conspiracy thinking?

In Escaping the Rabbit Hole, author Mick West shares over a decade’s worth of knowledge and experience investigating and debunking false conspiracy theories through his forum, MetaBunk.org, and sets forth a practical guide to helping friends and loved ones recognize these theories for what they really are.

Perhaps counter-intuitively, the most successful approaches to helping individuals escape a rabbit hole aren’t comprised of simply explaining why they are wrong; rather, West’s tried-and-tested approach emphasizes clear communication based on mutual respect, honesty, openness, and patience.

West puts his debunking techniques and best practices to the test with four of the most popular false conspiracy theories today (Chemtrails, 9/11 Controlled Demolition, False Flags, and Flat Earth) — providing road maps to help you to understand your friend and help them escape the rabbit hole. These are accompanied by real-life case studies of individuals who, with help, were able to break free from conspiracism.

Mick West has put forth a conclusive, well-researched, practical reference on why people fall down the conspiracy theory rabbit hole and how you can help them escape.
Mick West

“The subtitle says it all: Mick West demonstrates with exquisite style, wit, and insight how those three rare and valuable species, Fact, Logic and Respect (each now on the very brink of extinction) have in harness the power to shine light into darkness and dispel the miasma of bias, superstition and balefully proud ignorance that is threatening to poison our age.”—Stephen Fry, actor, comedian, activist

"Mick West explains in clear terms not only how people get into conspiratorial beliefs, but how to disabuse them of those same mistaken ideas.”—David Pakman, host of The David Pakman Show

“Mick West and his Metabunk website have become the go-to sources for curious minds overwhelmed by fantastic conspiracy claims circulating pop culture. The problem we professional debunkers have is that conspiracies do happen—Lincoln was assassinated by a cabal, World War I was triggered by a conspiracy to kill the Austrian Arch Duke, Watergate was a cover-up, there were no WMDs in Iraq—so some skepticism about conventional explanations is warranted. What we need is a conspiracy detection kit, and Escaping the Rabbit Hole is precisely that, arming readers with the tools they need to filter all the conspiracy craziness bombarding us daily. Was Hillary Clinton running a child sex ring at a pizza parlor? No. Did the Pentagon Papers and Wikileaks reveal that our government has been lying to us and covering up their misdeeds? Yes. How can we tell the difference? Read this book, which belongs in every newsroom and congressional office."—Michael Shermer, Publisher Skeptic magazine, monthly columnist Scientific American, author Why People Believe Weird Things, The Believing Brain, and Heavens on Earth

"Never before has a trip down the Rabbit Hole been so interesting and more importantly, educational. Mick West dives headfirst into the bottomless trap of irrationally and conspiracy theories to offer a lifeline to those who don’t even know they are lost. For the rest of us, this book gives us a peek not only into the abyss, but into the minds of those wandering its depths.”--Richard Saunders, Producer The Skeptic Zone Podcast, CSI Fellow, Life Member Australian Skeptics

“Mick West goes beyond merely debunking conspiracy theories to examining the psychology and motivations of believers. Through interviews and research, West offers critical thinking approaches to not only understanding conspiracy theories but helping those who believe them analyze their own beliefs. Escaping the Rabbit Hole is an insightful examination of how and why otherwise smart, ordinary people can lose their bearings in the topsy-turvy world of conspiracies.” --Benjamin Radford, M.Ed, deputy editor, Skeptical Inquirer science magazine

"One reason that a conspiracy theory persists is because evidence that disproves it is considered to be evidence of an even larger cover-up. Mick West’s Escaping the Rabbit Hole draws on his long experience leading people away from unwarranted beliefs to illustrate how you need more than mere facts to help conspiracy theorists arrive at better conclusions on their own. I really enjoyed it. There is hope!"--Robert J. Blaskiewicz, Jr., Assistant Professor of Critical Thinking, Stockton University

“As someone who’s spent a lot of time in rabbit holes, I thoroughly enjoyed this book. West teaches us to be kind and reminds us that anyone can fall for conspiracy theories, regardless of intelligence. Through interviews and discussion of best practices, he gives us hope that even a person stuck in the deepest, darkest rabbit hole can eventually escape. I highly recommend this book!”—Susan Gerbic, founder of Monterey County Skeptics, Fellow of the Committee for Skeptical Inquiry

“Trying to talk a conspiracy theorist out of his notions can often feel like trying to gently persuade a cat to have all her fur shaved off. But if there's anyone who I trust to guide the volunteer debunking army out there, it's Mick West. With candor leavened by compassion, West explains why people get sucked into conspiracy theories, why we should be more sympathetic to their point of view, and yes, even how to help people see the light. Read it if you have a chemtrails-panicked loved one and you're not ready to give up on the relationship quite yet.”—Amanda Marcotte, author of Troll Nation and Senior Political Writer at Salon.com

How to Debunk Conspiracy Theories Using Facts, Logic, and Respect

By Mick West
LIST PRICE $18.99
PRICE MAY VARY BY RETAILER