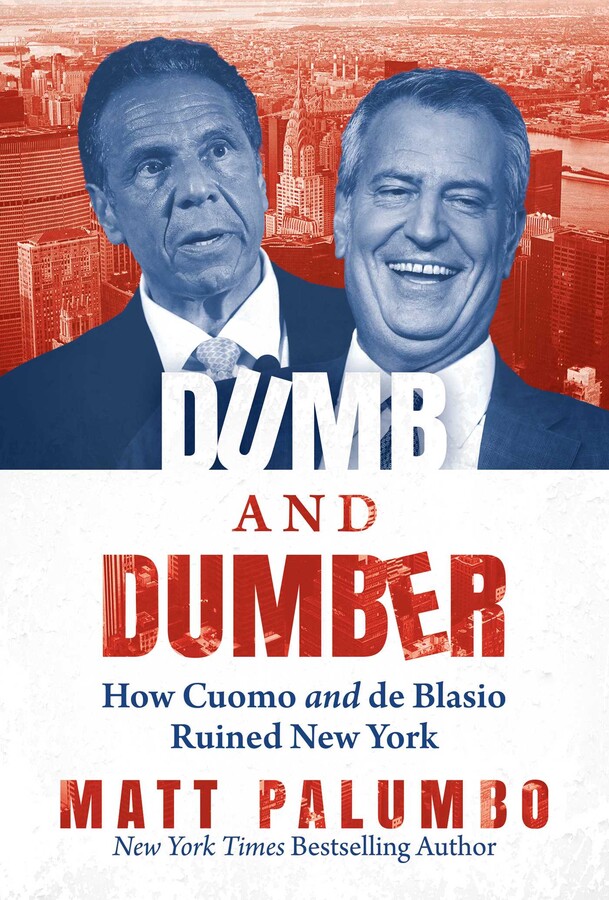 By Matt Palumbo
LIST PRICE $27.00
PRICE MAY VARY BY RETAILER

Thanks to the policies of Andrew Cuomo and Bill de Blasio, the glory days of the Empire State and the Big Apple are long behind them.

In America’s early days, most immigrants entered America through New York. For many, New York was synonymous with America and the American dream itself—a beacon of hope for the rest of the world. Now, for the first time ever, people are fleeing New York by the millions. Plagued by high taxes, big government, excessive regulations, and other obstacles to liberty, there are few reasons for one to want to remain in the state under Governor Andrew Cuomo’s leadership. And in New York City, which houses nearly half of the state’s population, Mayor Bill de Blasio has been doing everything in his power to accelerate the decline and bring the city back to its pre–Rudy-Giuliani days.

Matt Palumbo is The Dan Bongino Show’s “resident fact checker” and author of The Conscience of a Young Conservative, In Defense of Classical Liberalism, A Paradoxical Alliance, Spygate, and Debunk This!.

"The definitive book on the decline of New York and New York City under Andrew Cuomo and Bill de Blasio."

"The best book ever to be written by someone else named Matt Palumbo."

"Matt Palumbo breaks apart the media narrative on New York Governor Andrew Cuomo and New York City Mayor Bill de Blasio's handling of the coronavirus pandemic. Cuomo and de Blasio's actions crippled New York and led to thousands of deaths, while they used the media to craft an image that they were successful in their efforts. Palumbo shows that the only things Cuomo and de Blasio are interested in protecting is their political careers."

– Ryan Girdusky, Author of "They're Not Listening: How The Elites Created The National Populist Revolution"

"Matt has decided to expose us to the truth, that the stars of the progressive movement have little to offer except empty pockets, unsafe cities, and an erosion of common sense. It will be hard to convince anyone who reads this book to stay and suffer in NYC."

"As Palumbo so effectively illustrates, New York's greatness cannot be taken for granted. Dumb and Dumber lays out in stunning fashion how our nation's largest city, and the state in which it resides, are losing population and wealth on an epic scale thanks to the utter failure of liberal leadership. Palumbo's chronicle of New York's decline is tragic, but critical reading for anyone hoping to grasp an understanding of how a perfect storm of left-wing policy, bloated bureaucracy, and a pandemic is destroying our nation's largest hub—and how it can be saved before it's too late."

"Matt Palumbo expertly details the sad decline of New York and exposes the hypocrisy and incompetence of two of America's most overrated politicians. Though the story is a sorry one, the failures detailed in this book may reveal remedies for this once-great state and city."

– Jack Buckby, Author of "Architects of Betrayal: How Parliament Tried to Thwart Brexit, from Chequers to the Meaningful Vote"

"Matt Palumbo deftly navigates the political terrain of New York City and State in order to expose the malpractice of two of America's worst ever politicians. De Blasio and Cuomo can't hide from the facts, and this book is chock-full of them. Palumbo's impeccable research and eminently readable style expose de Blasio and Cuomo for the incompetent clowns they truly are."

"It's not just the pandemic that's been deadly for New York—it's the reigns of terror and ineptitude by de Blasio and Cuomo. Palumbo gets to the heart of it in this compelling read about an iconic city in the throes of a steep decline at the behest of these incompetents."

By Matt Palumbo
LIST PRICE $27.00
PRICE MAY VARY BY RETAILER