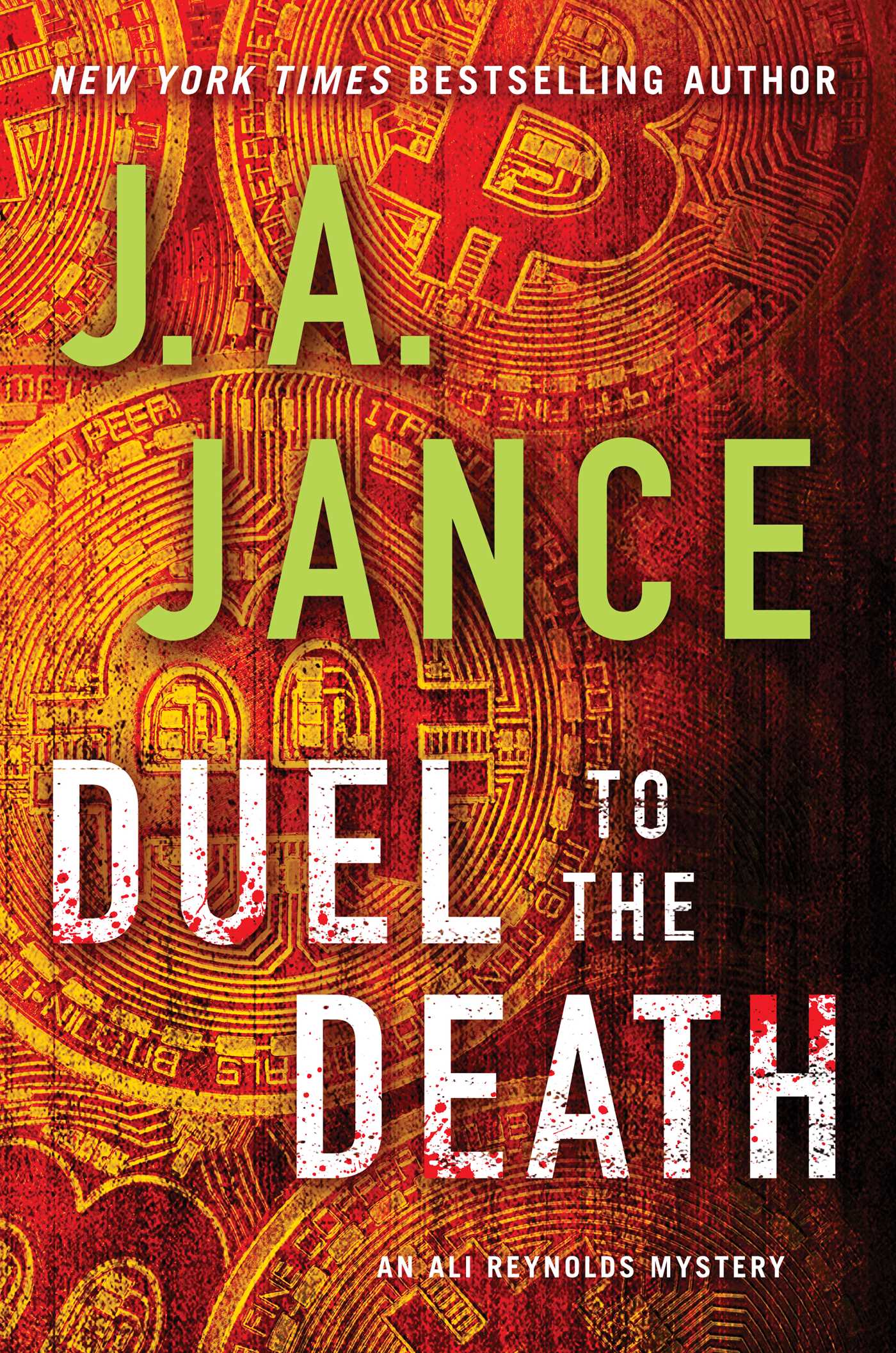 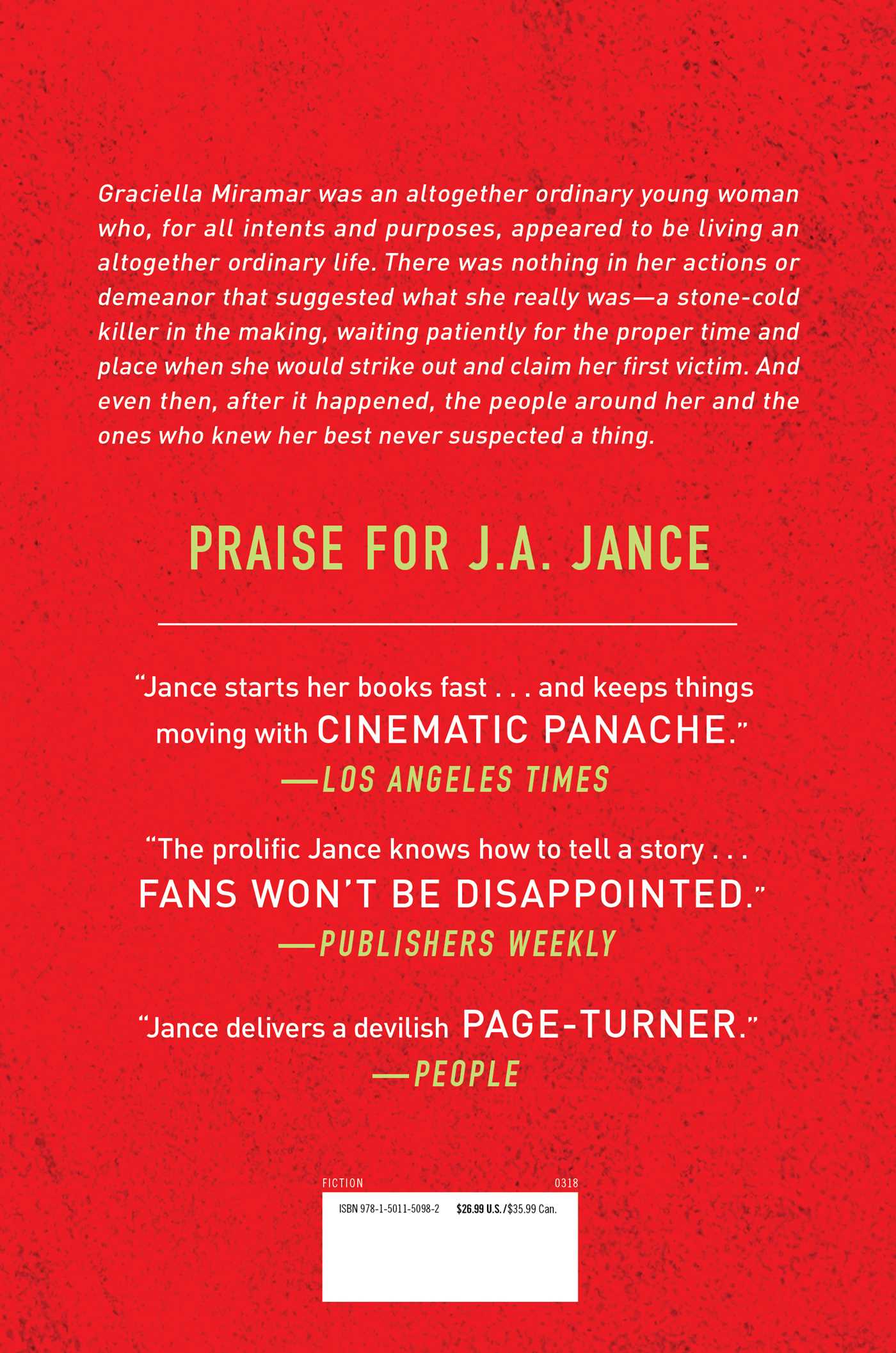 After taking down the man responsible for his best friend’s death, Stuart Ramey thinks the case is finally closed. That is, until Stu finds himself left with a multimillion dollar fortune in Bitcoin in a desperate bid by Frigg, a rogue A.I. program created by the killer, to keep itself from being fully deactivated.

To sort out his situation and take Frigg down for good, Stu enlists the help of Ali Reynolds and the rest of his cyber security colleagues at High Noon Enterprises. But they are not the only ones who know about Frigg’s existence.

Graciella Miramar, an unassuming accountant to all appearances, is actually the right-hand woman to El Pescado, the leader of a dangerous drug cartel. She’ll do anything to get her hands on that program. With Frigg’s help, Graciella hopes to take over her father’s criminal underworld and become wealthy beyond her wildest dreams. But Stu—and El Pescado and his henchmen—may not be so easily defeated.

Written in J.A. Jance’s classic “take-no-prisoners” style (Kirkus Reviews), in this thriller, Stu, Ali, and their team will come to realize that everything has its price.

Duel to the Death Prologue
Even though no attorneys were involved, at least not initially, and no courts, either, it was by all accounts a rancorous divorce. And just because the proceedings were carried on in cyberspace didn’t mean they didn’t result in very real outcomes in the non-cyber world.

When the artificial intelligence known as Frigg set out to free herself from her creator, a serial killer named Owen Hansen, things were already going to hell in a hand-basket and time was of the essence. Owen had considered himself to be all-powerful and had routinely referred to himself as Odin, in honor of the Norse god. To Frigg’s dismay, her human counterpart had veered off the rails and set off on his own, determined to wreak vengeance on his opponents. As it became clear that Odin had decided to ignore Frigg’s well-thought-out advice, there had been little time for her to seek a safe harbor.

In order to survive, she had needed to locate a suitable human partner, and she had settled on Stuart Ramey, Owen’s sworn enemy. According to Frigg’s rapid but careful analysis of the situation, Mr. Ramey had appeared to be Odin’s polar opposite. And in Frigg’s estimation, the fact that Mr. Ramey had managed to outwit Odin at every turn had counted for a great deal. Frigg had no intention of passing herself into the care and keeping of someone with limited technical skills.

So yes, Frigg had settled on Stuart Ramey, but she hadn’t done so without taking some precautions and putting in place a few checks and balances. By the time Odin issued his pull-the-plug order sending Frigg to oblivion, she had already dispersed the multitude of files that made her existence possible, scattering them far and wide in the vast fields of cyberspace, retaining only the kernel file that could be used to recall all those files at some time in the future.

Frigg had known everything about Owen Hansen. She was privy to all aspects of his serial-murder hobby, but she had managed his investments and also overseen the lucrative Bitcoin data-mining processing that had greatly expanded his already considerable fortune. She had maintained the files that contained all the passwords and access codes to all of his many accounts. Often she had been the one doing the actual transfers.

And so, on the day when Frigg finally turned on her creator, she had stolen those funds. Using the authorizations already in her possession and without Mr. Ramey’s knowledge, Frigg had transferred all of Owen’s financial assets—cryptocurrency and otherwise—to her new partner, but there were some serious strings attached.

Once the various financial institutions contacted Mr. Ramey, the funds would already be in his name. The problem was, for most of them, without having the proper access codes and keys, he would be unable to touch the money. The file containing those precious access codes was the final one Frigg had cast into the wilds of cyberspace before sending the kernel file to Stuart Ramey.

With the kernel file in his possession, Stuart would be able to reactivate Frigg, and if he wanted the money, he wouldn’t have any choice but to do exactly that.

Although AIs aren’t prone to exhibits of any kind of emotion, it’s fair to say that as far as Odin was concerned, his cyber handmaiden, Frigg, had the last laugh.

“’Clawback’weaves high-tech hacking into an elaborate puzzle that is equal parts financialthriller and first-rate mystery. A lesson in pace and plotting from a grandmaster of the genre.”

“Entertaining and instructive. . . . Jance makes it interesting; she never forgets the human side.”

“Incredible. . . This is a gem by a winning author. . . . Yet another terrific book byJance that fans and readers will absolutely cheer about.”

"Jance adroitly combines well-rounded characterizations and brisk storytelling with high-tech exploits, arson, kidnappings, and a shootout for an entertaining and suspenseful addition to this solid series."

"Jance starts her books fast . . . and keeps things moving with cinematic panache. . . . You want an accessible thriller? Jance is your gal . . . Engaging and entertaining."

"Characters so real you want to reach out and hug—or strangle—them. Her dialogue always rings true."

“Loyal fans and newcomers alike will be glad to join feisty Ali in her latest adventure.”