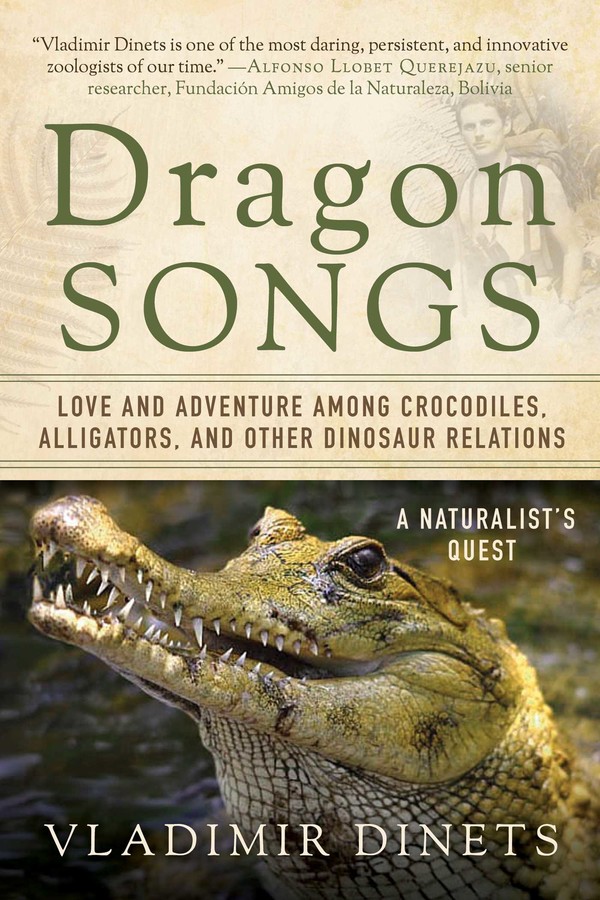 Love and Adventure among Crocodiles, Alligators, and Other Dinosaur Relations

The amazing story of a groundbreaking scientific quest over five continents to study our modern dinosaurs—that ends up changing a life, as well as our understanding about crocodiles and their relatives.

A born naturalist and a fearless traveler, Vladimir Dinets wrote travel guides, conducted field research, and lived a couple of lives before he was accepted into the PhD program in zoology at the University of Miami. He thought crocodiles were a dead-end research topic—survivors from the age of the dinosaurs but not much else—until he witnessed groups of up to seventy alligators performing mating choruses that included infrasound vibrations—a form of communication extremely rare in nature—and a “dance” unknown in the scientific literature but that resembled a scene from Jurassic Park. To prove his thesis about the language of crocodiles, he spent the next six years traveling around the world on shoestring budgets and in extreme circumstances, studying almost every living species. At the same time, as a man desiring companionship in life, he sought love.

With adventures on five continents, Dragon Songs is his account of this quest. It includes an escape from a boiling lava lake in the Afar Desert, being chased up a tree by a tiger in India, hitching a ride with a cocaine smuggler in Bolivia, and diving with giant Greenland sharks—all in the name of studying crocodiles, among which he routinely paddled in his inflatable kayak. Of course, not everything went according to plan. But, in the end, his ground-breaking research helped change the field. And during the course of his adventures, he met and courted his future wife.

"With his artist's eye, scientist precision, and explorer's free spirit, Dinets, a Russian immmigrant and Louisana State University professor, is no ordinary zoologist. Here, he leads readers on an intense and joyous global pursuit of the mating customs of crocodiles (as well as his own), chronicling the adventures in fieldwork that would inform his graduate thesis. Along the way, he notes how he prefers assistants "pathologically prone to risk-taking behavior," and on several occasions persuaded bush pilots to let him fly their planes—sans license. Dinets is smuggled through Somalia along with "rap music tapes and cases of Coca Cola," and avoids the bandits of Chambal, India (who live near a river filled with hundreds of singing "mugger" crocs); he offers opinions on the politics of science ("negative results are virtually impossible to publish") and seeks out scientific art, like an ancient Chinese "magic bowl" that produces infrasounds—sounds at frequencies of less than 20 Hz, the low end of the normal human hearing range—as crocodiles do. Throughout, gators and crocs sing, slither, and dance, providing fascinating glimpses of the dinosaurs from which they evolved (the discovery that Siamese crocs feed their yearlings indicates even the earliest dinos may have had "complex parental care"). Dinets offers an exuberant, intelligent take on the adventure of science that has the power to inspire aries of starry-eyed, flack-jacketed Ph.D.'s." —Publishers Weekly

“Vladimir Dinets is one of the most daring, persistent, and innovative zoologists of our time. . . . He knows our rainforests like an indigenous person. His research reopened the field of sound communications in reptiles. Now other scientists are following in his steps.”
—Alfonso Llobet Querejazu, Senior Researcher, Fundación Amigos de la Naturaleza, Bolivia

“His efforts have added to our knowledge of crocodilians. . . . I write to support the book project [of ] my colleague, Vladimir Dinets.” —Colin Stevenson, Director, Madras Crocodile Bank Trust

“Wildlife Spectacles is captivating and entrancing with both its information on a multitude of species and the full-color photographs throughout. Their stunning beauty is as much a reason to read this book as the text is.” —Shelf Awareness

“A gorgeous book that takes readers on an unforgettable journey into the lives of some of our planet’s most magnificent creatures, from muskoxen to moths, with spectacular photographs and incredible stories... Wildlife Spectacles opens our eyes to the worlds we don’t see often enough, if ever, in North America, and it’s a book that engages not only visually but emotionally and intellectually. A wonderful gift book for anyone who loves animals and nature, it’s also a book that we should all have on our shelves to remind us how precious—and how vulnerable—our wild places are.” —Ecolit Books

Love and Adventure among Crocodiles, Alligators, and Other Dinosaur Relations