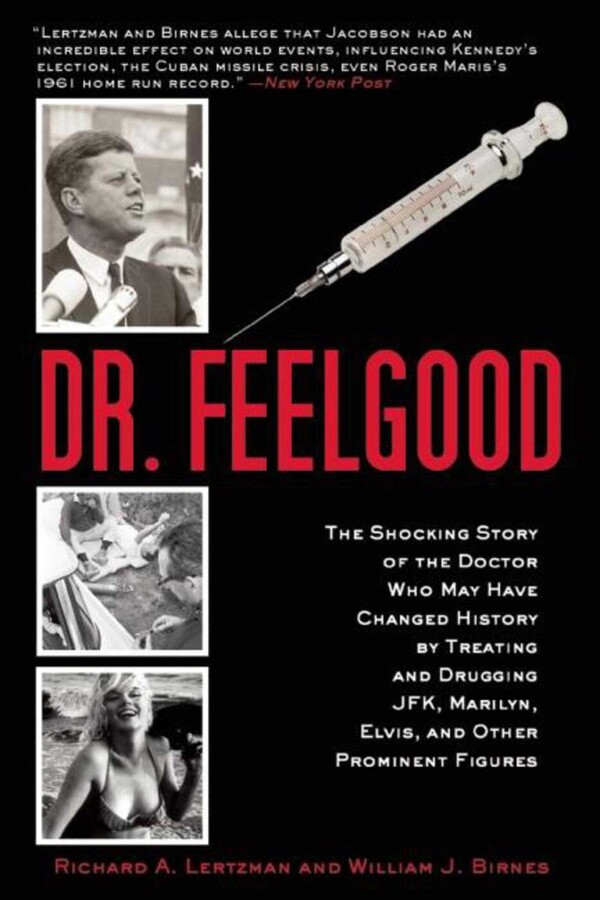 The Shocking Story of the Doctor Who May Have Changed History by Treating and Drugging JFK, Marilyn, Elvis, and Other Prominent Figures

By Richard A. Lertzman and William J. Birnes
Published by Skyhorse
Distributed by Simon & Schuster
LIST PRICE $14.95
PRICE MAY VARY BY RETAILER

Doctor Max Jacobson, whom the Secret Service under President John F. Kennedy code-named Dr. Feelgood,” developed a unique energy formula” that altered the paths of some of the twentieth century’s most iconic figures, including President and Jackie Kennedy, Marilyn Monroe, Frank Sinatra, and Elvis. JFK received his first injection (a special mix of vitamins and hormones,” according to Jacobson) just before his first debate with Vice President Richard Nixon. The shot into JFK’s throat not only cured his laryngitis, but also diminished the pain in his back, allowed him to stand up straighter, and invigorated the tired candidate. Kennedy demolished Nixon in that first debate and turned a tide of skepticism about Kennedy into an audience that appreciated his energy and crispness. What JFK didn’t know then was that the injections were actually powerful doses of a combination of highly addictive liquid methamphetamine and steroids.

Author and researcher Rick Lertzman and New York Times bestselling author Bill Birnes reveal heretofore unpublished material about the mysterious Dr. Feelgood. Through well-researched prose and interviews with celebrities including George Clooney, Jerry Lewis, Yogi Berra, and Sid Caesar, the authors reveal Jacobson’s vast influence on events such as the assassination of JFK, the Cuban Missile Crisis, the Kennedy-Khrushchev Vienna Summit, the murder of Marilyn Monroe, the filming of the C. B. DeMille classic The Ten Commandments, and the work of many of the great artists of that era. Jacobson destroyed the lives of several famous patients in the entertainment industry and accidentally killed his own wife, Nina, with an overdose of his formula.

On December 3, 1979, funeral services were held for Dr. Max ­Jacobson at the Frank E. Campbell Funeral Chapel at Madison ­Avenue at 81st Street in his adopted hometown of New York City. The Campbell Chapel has been the home of countless notable funerals, including those held for Irving Berlin, Joan Crawford, Bat Masterson, Judy Garland, Walter Cronkite, Rudolph Valentino, Tennessee Williams, mob boss Frank Costello, and many others. Jacobson’s was a traditional Jewish memorial followed by a shiva, a Jewish mourning period in which the deceased’s family receives ­condolences at home. Jacobson’s friend Michael Samek ­remembered that the funeral was well attended and that ­Jacobson was ­buried at Mt. Hebron Cemetery, which is in Queens, New York, next to his wife Nina and his parents, Louis and Ernestine. The celebrities in ­attendance at Dr. ­Jacobson’s funeral attested to the doctor’s extensive influence in the entertainment industry, among artists and writers, and in the world of ­politics and government.

The impact of the life and practices of Dr. Max Jacobson has reverberated for decades. There have been more than two hundred books touching on Jacobson, his drugs, and the lives he destroyed. Some of these books were written by patients who knew him ­intimately (such as Doris Shapiro’s We Danced All Night and Eddie Fisher’s Been There, Done That), while others were written by ­historians and popular writers (such as Roger Rapoport’s The Super-Doctors, which takes a deeper look at Jacobson within a medical and historical context). Movies such as Blake Edwards’s S.O.B. have parodied him, and songs such as Aretha Franklin’s “Dr. Feelgood” have immortalized him. The deaths of former patients have been blamed on him, such as Jackie Kennedy’s fatal lymphoma, and actor Bob Cummings’s decline and his death from Parkinson’s disease. There were many other deaths including Kennedy family photographer and Jacobson’s friend Mark Shaw, Alan J. Lerner, and Max’s own wife, Nina.

Whether lionized or vilified by his patients, Dr. Max Jacobson has become a part of the fabric of the twentieth century. There have been credible studies of his impact on John F. Kennedy, Jr. by popular historians such as Robert Dallek, Seymour Hersh, Richard Reeves, Frederick Kempe, C. David Heymann, Barbara Leaming, and Lawrence Leamer, all of whom reported that JFK’s life was deeply influenced by his relationship with Jacobson. The internet is replete with conspiracy theories surrounding Jacobson. Radio talk show hosts have held discussions on the “Jacobson Effect.” His nickname, Dr. Feelgood, is now commonly used to refer to numerous modern doctors whose misuse of drugs caused their patients harm or death, such as the late Michael Jackson’s physician Dr. ­Conrad Murray. Even the widespread use of methamphetamines in the United States has been blamed on Jacobson. Dr. Leslie Iversen, one of the leading experts on amphetamine use and a professor of pharmacology at Oxford University, directly links Jacobson’s drug practices to the current spread of methamphetamines.

Ironically, despite all his influence and notoriety, Max Jacobson did not become a rich man by any account. Claims, such as the one made by actor Felice Orlandi, that Jacobson ran a global amphetamine syndicate that made millions of dollars were not borne out by reality. Jacobson himself complained that the legal defense he raised before the state of New York was so expensive, he was afraid it might wipe him out. In their exposé of Jacobson published on December 4, 1972, Rensenberger, Brody, and ­Altman of the New York Times wrote that despite Max Jacobson’s rich clientele of patients, he lived very modestly in what could be called a middle-class apartment.

His best friend, Michael Samek, noted that “Max never got rich. He never set up a proper billing system. He was never paid by many patients and that includes President Kennedy. . . . Max was a very compassionate person. He wanted to help his patients. Max always said, ‘It’s better to feel good than to feel sick.’ Treating patients was his life—not money. He saw his practice as a sort of mission.”2 The debate continues as to whether Jacobson was a fraud and a charlatan or a cutting-edge and compassionate physician. As fascinating as Jacobson’s story is in and of itself, it is also the story of methamphetamine, a drug that deludes those who use it into thinking they are larger than life. The drug is a Venus flytrap that lures, entraps, and then finally kills its victims.

On a positive note, medical licensing laws changed because of Jacobson. The War on Drugs emerged, in a small measure, out of the scandal surrounding Jacobson. Because of the influence he wielded with a drug that frightened federal secret intelligence agencies, conspirators within those agencies took extreme measures to protect power they felt belonged to them.

Jacobson was not only an ­instrument of ­destruction—­
inadvertently as well as deliberately as he sought to exert his control over those around him—but he also was a tool used by the media to sell newspapers as the Nixon administration crumbled from within. He was vilified not just in the print and broadcast media, but by New York State regulators, who revoked his license to practice medicine as they made an example of a person they believed had abused every aspect of medical procedure when it came to preparing and dispensing medication. In a larger sense, too, Max Jacobson became the poster boy for drug abuse, and in the wake of his exposure, the federal government created and then prosecuted its War on Drugs.

Perhaps the most ironic aspect of the Max Jacobson story was the way it demonstrated how human networks formed, how a drug addiction can spread virally among specific groups, and how an individual at the center of that network, just like a spider, can weave and spread his web to ensnare others. Indeed, we can call the Jacobson story a tragedy, but it’s an illustrative tragedy showcasing the ways human beings influence others so as to create an entire social movement. As grandiose as this sounds, it’s true.
Richard A. Lertzman
William J. Birnes

William J. Birnes is the New York Times bestselling author of The Day After Roswell and many other books including the Skyhorse titles Dr. Feelgood, Wounded Minds, and The Big Book of UFO Facts, Figures & Truth. He was the consulting producer, writer, and lead host of the History Channel's "UFO Hunters," and the publisher of UFO Magazine from 1998 through 2014. He lives in Lambertville, NJ.

The Shocking Story of the Doctor Who May Have Changed History by Treating and Drugging JFK, Marilyn, Elvis, and Other Prominent Figures

By Richard A. Lertzman and William J. Birnes
Published by Skyhorse
Distributed by Simon & Schuster
LIST PRICE $14.95
PRICE MAY VARY BY RETAILER