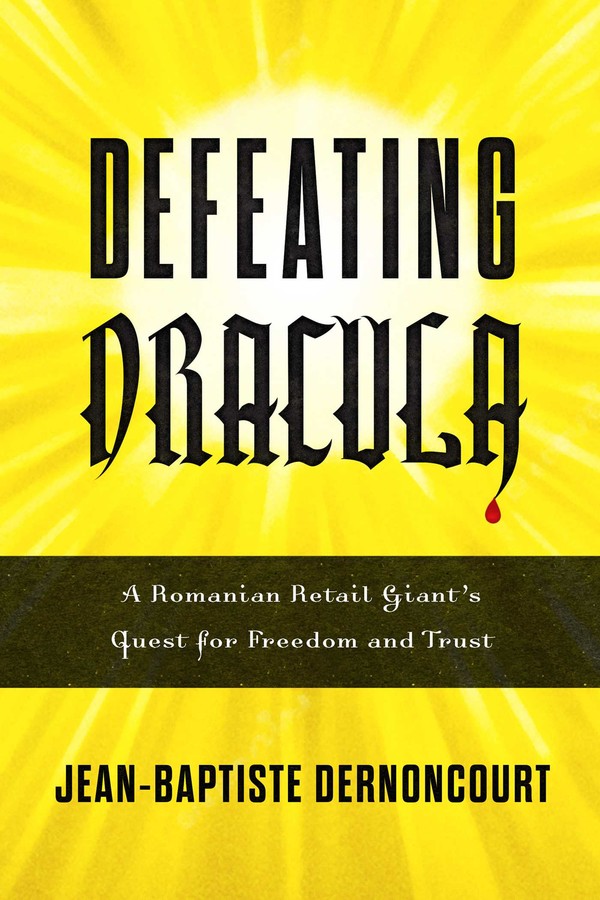 A Romanian Retail Giant's Quest for Freedom and Trust

By Jean-Baptiste Dernoncourt
LIST PRICE $27.99
PRICE MAY VARY BY RETAILER

Monsters don’t just lurk in the shadows. They inhabit our meeting rooms, our shared office spaces, and sometimes, they lurk deep within ourselves. Penned by the former CEO of Carrefour Romania, Defeating Dracula articulates how to win trust, enact change, and defeat the monsters, both inside and out.

In 2013, at thirty-two years of age, Jean-Baptiste Dernoncourt was faced with a complex, but welcomed, task. As the newly-named CEO of Carrefour Romania, one of the largest retail companies in the world, Dernoncourt was asked to transform a stable—albeit static—global company into an unstoppable enterprise.

He took on the task with determination and hope, but soon ran into a resistant and distrustful workforce; a long-standing company culture of corruption and stagnation; and the inability to spark transformation in a company that had grown comfortable and complacent. Everywhere he turned, another monster waited in the shadows.

But Dernoncourt soon realized the problem didn’t just stem from an uninspired workforce and a c-suite wary of change; it also stemmed from his own limiting beliefs. Facing his own demons head-on, Dernoncourt turned his focus inward, using case studies, coaching, and even a strong sense of self-deprecating humor to find his way forward as a transformational leader. By following a top-down leadership approach, Dernoncourt was able to transform Carrefour’s corporate business culture and create lasting change, ultimately doubling Carrefour’s business in just five years.

This is the story of his transformation, and yours. Accompanied by the words of Bram Stoker’s original text, Defeating Dracula is a blueprint for the creation of trust in a world where monsters lurk and change seems impossible. Whether you need to inspire cultural transformation in the boardroom, the office, or just within yourself, Defeating Dracula will provide step-by-step guidance on your journey to creating lasting change.

Jean-Baptiste Dernoncourt is an international businessman and retail executive who currently leads Copap Inc., a supply-chain management company that helps mid to large organizations increase their capital by connecting them with the best supply chains around the world. Prior to working at Copap Inc., Dernoncourt was appointed CEO of Carrefour Romania, one of the largest retailers in the world, at the age of thirty-two. During his five-year tenure, he also took on the role of chief digital officer for Northeast Europe, effectively doubling Carrefour’s business and revitalizing the company’s marketing, e-commerce, and omnichannel strategy. Dernoncourt’s ability to speak six languages can be attributed to the nearly two decades he has spent in the global retail sphere. He now lives in Montreal with his wife and son.

A Romanian Retail Giant's Quest for Freedom and Trust

By Jean-Baptiste Dernoncourt
LIST PRICE $27.99
PRICE MAY VARY BY RETAILER