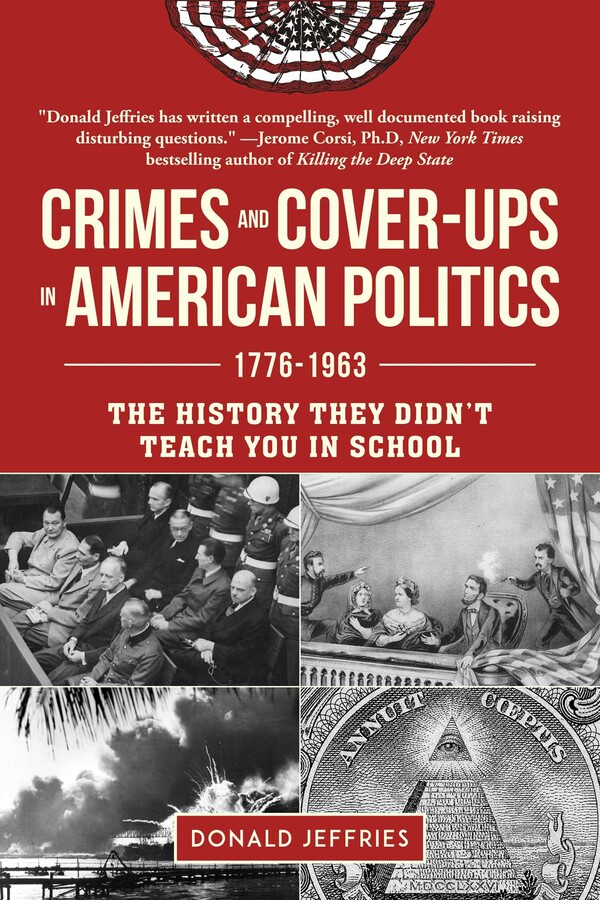 The history that the textbooks left out.

For far too long, American history has been left in the unreliable hands of those that author Donald Jeffries refers to as the court historians. Crimes and Cover-ups in American Politics: 1776-1963 fights back by scrutinizing the accepted history of everything from the American War of Independence to the establishment reputation of Thomas Jefferson and the other Founding Fathers, the Civil War, the Lincoln assassination, both World Wars, US government experimentation on prisoners, mental patients, innocent children and whole populated areas, the Lindbergh baby kidnapping and much, much more. Secular saints like Abraham Lincoln, Theodore Roosevelt, and Franklin D. Roosevelt are examined in a critical way they seldom have been.

Jeffries spares no one and nothing in this explosive new book. The atrocities of Union troops during the Civil War, and Allied troops during World War II, are documented in great detail. The Nuremberg Trials are presented as the antithesis of justice. In the follow-up to his previous, bestselling book Hidden History: An Expose of Modern Crimes, Conspiracies, and Cover-Ups in American Politics, Jeffries demonstrates that crimes, corruption, and conspiracies didn't start with the assassination of President John F. Kennedy.

History should be much more than cardboard villains and impossibly unrealistic heroes. Thanks to the efforts of the court historians, most Americans are historically illiterate. Crimes and Cover-ups in American Politics: 1776-1963 is a bold attempt at setting the record straight.

“Finally, someone with the spine to push back against the radical left-wing revisionists who write our textbooks, indoctrinate our children and debase our culture. Jeffries has gifted those with eyes to see and ears to hear with a clear uncompromising portrait of our past. Now it is up to you, dear reader, to forge an honest and honorable path towards America’s future. With this ambitious yet impeccably researched book, Jeffries has reversed the left’s slanderous lies and reclaimed the legacy of the American founding fathers and their uncompromising, revolutionary experiment. At the same time, Jeffries never fails to sting like a scorpion where needed - exposing misdeeds, malfeasance, manufactured mythologies and hollow heroes. Redemption can only be had after the painful journey of introspection has been completed. That road begins here.” —Richard Syrett, Broadcaster/writer/producer and regular guest-host on Coast to Coast AM

"The book challenges America's "court historians" on many points. The individual readers will question much of Crimes and Cover-Ups, agree with other parts, and think hard about the points raised. The American public needs debates inspired by the works of Zinn, Leigh, and Jeffries, and as publicly as possible, not as one ideology vs. another, but as done here, one to all.” —Robert Davis, New York Journal of Books

“Holding a contrarian view to those he characterizes as American ‘court historians,’ Jeffries (Survival of the Richest, 2017) outlines another perspective on U.S. history. Noting that history is generally written by the victors, he wants readers to learn the other side’s claims as well. He sees the story of the U.S. as betrayal of the Founding Fathers’ intentions.” —Mark Knoblauch, Booklist

"There is no one in America who so thoroughly researches and writes so well about real American history..not just from 1776 until 1963..but right up to today.!! A thrilling informative read." —John Barbour, creator and co-host of the #1 television show Real People, writer and director of The Garrison Tapes and The American Media and the Second Assassination of John F. Kennedy