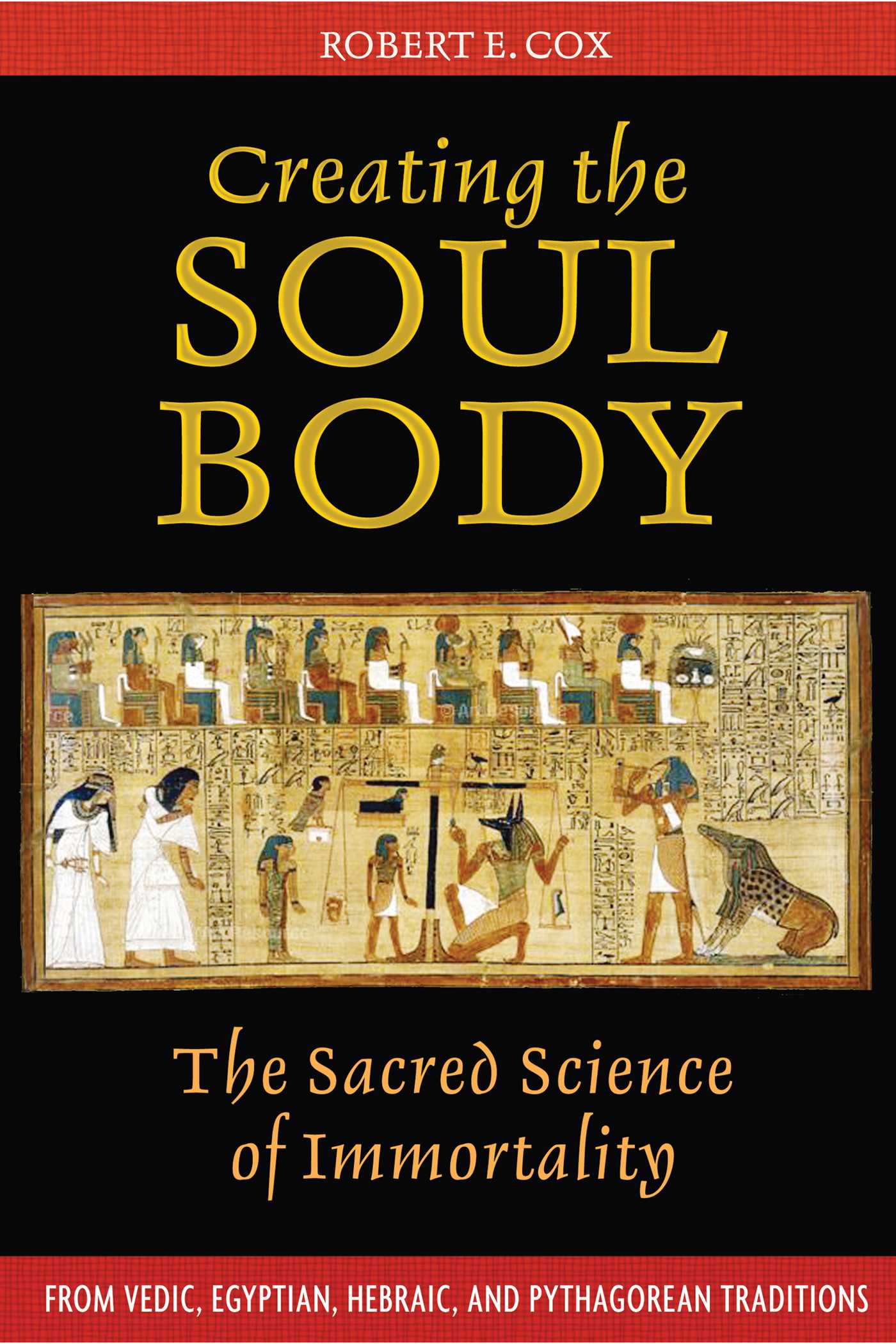 Outlines the principles and mechanics of the soul body, the spiritual vehicle that enables individual consciousness to survive the body’s death

• Shows that the ancient Vedic, Egyptian, Hebraic, and Pythagorean traditions shared and understood this spiritual practice

Ancient peoples the world over understood that individual consciousness is rooted in a universal field of consciousness and is therefore eternal, surviving the passing of the physical body. They engaged in spiritual practices to make that transition maximally auspicious. These practices can be described as a kind of alchemy, in which base elements are discarded and higher levels of consciousness are realized. The result is the creation of a vehicle, a soul body, that carries consciousness beyond physical death.

These spiritual preparations are symbolized in the Vedic, Egyptian, and Hebraic traditions as a divine stairway or ladder, a step-by-step path of ascent in which the practitioner raises consciousness by degrees until it comes to rest in the bosom of the infinite, thereby becoming “immortal.” This spiritual process explains the reincarnation of the Dalai Lama, for example, whose reincarnation is confirmed in infancy through physical and spiritual signs, indicating that the consciousness has been carried from one lifetime to the next.

In Creating the Soul Body, Robert Cox maps the spiritual journey of consciousness behind this sacred science of immortality and reveals the practice of creating a soul body in detail. He also shows that this ancient spiritual science resembles advanced theories of modern science, such as wave and particle theory and the unified field theory, and reveals that modern science is only now awakening to this ancient science of “immortality.”


THE PROSPECT OF SPIRITUAL IMMORTALITY

Modern theorists generally believe that consciousness is created by the activity of the brain and nervous system. There is no notion that individual consciousness is rooted in an all-pervading field of consciousness that is eternal and uncreated. As a result, it is presumed that when the body dies, consciousness dies. In this case, dead means dead. That’sit--end of story.
Although thousands of well-documented near-death experiences are often cited as proof that consciousness survives the death of the brain, the scientific community remains largely unimpressed. The latest scientific conjecture regarding such visions of the afterlife is that they are little more than euphoric, dreamlike states produced by declining oxygen levels in the brain during the process of dying. As a result, scientists continue to argue that near-death experiences are dependent upon brain functioning--that is, upon the reduced levels of brain functioning that occur while the brain is in the process of dying. Theorists who suggest otherwise are deemed unconventional at best and “wacko” at worst.
The ancients, however, held a completely different view: all forms of individual consciousness are rooted ultimately in a universal field of pure consciousness, which does not die when the body dies. In this regard, the ancient spiritual science was rooted in a fundamental conservation principle that involves the conservation of consciousness. By comparison, modern physical science holds on to the conservation of mass-energy, which states that mass-energy can be neither created nor destroyed; it can only change forms. This is consistent with the modern field-theory view of mass-energy.
Similarly, ancient spiritual science was rooted in the principle that consciousness can be neither created nor destroyed; it can only change forms. This is consistent with the ancient field-theory view of consciousness. Given this principle, we can assert that the type of consciousness possessed by the soul after death may be different from that possessed during life, but it is still a form of consciousness. This offers hope, at least in principle, that the soul might realize a form of spiritual immortality in which consciousness survives the death of the physical body.
Yet the prospect of spiritual immortality was not just a religious platitude to which the ancients paid lip service. It was the dominant force in the earliest cultures and civilizations. It guided not only the affairs and expenditures of the state but also the daily lives of the people. In fact, the attainment of spiritual immortality was deemed the ultimate purpose of life, the universe, and everything. In time, however, this driving purpose was destined to become lost. Even during the Hellenistic era, when the Hermetic texts were being composed, the general view was that the common human had given up on the hope of spiritual immortality and had surrendered to death. One Hermetic sage therefore cried out: “O men, why have you given yourselves up to death, when you have been granted the power to partake of immortality?”6
It can be said first and foremost that the ancient spiritual science was a science of immortality. It dealt with how the individual human mind can become identified with the divine mind--the all-pervading field of pure consciousness--and then expand its range of intuitive comprehension over the entire spectrum of creation and even beyond creation.
Secondarily, it was a science about the universe and everything. This follows naturally from the ancient notion that the ultimate field that created the universe and everything is none other than a field of pure consciousness. When the enlightened soul becomes identified with that field and expands its intuitive comprehension over the full spectrum of creation, it becomes a knower of the universe and everything. It then develops the ability to see what no physical eye can see, to hear what no physical ear can hear, and to know, directly and intuitively, what the ordinary human mind cannot know.
Such enlightened souls who possessed the eyes to see and the ears to hear the otherwise hidden universal reality were deemed sages or seers. It was on the basis of their all-embracing universal vision that the ancient spiritual science was formulated.

THE REVIVAL OF SPIRITUAL WISDOM

Although the sages predicted that their spiritual science would be lost, they also predicted that eventually it would be rediscovered. Toward this end, they wrote their sacred texts, mapped out their sacred lands, and designed their sacred monuments for posterity--for the sake of a future generation that might be more worthy to receive them. For example, the Hermetic sages prayed: “Ye holy books, which have been written by my perishable hands, but have been anointed with the drug of imperishability by Him who is the master over all, remain ye undecaying through all the ages, and be ye unseen and undiscovered by all men who go to and fro on the plains of this land, until the time when Heaven, grown old, shall beget beings worthy of you.”7
Over the course of the past three centuries, many ancient texts, sites, and monuments, which were previously lost and forgotten, have been rediscovered. For the first time in history we now have access to ancient sacred texts from all around the world. These were once the exclusive province of the elite classes and secretive cults and are largely written in a highly symbolic code language unique to the cultures from which the texts originate. Our goal here is to crack the code of the ancient spiritual science so that the science possessed by different cultures can be compared and evaluated in the light of modern empirical science.
Robert E. Cox

" . . . a strong pick exploring the road to immortality. His explanation of the process explains the reincarnation of the Dalai Lama, and maps the spiritual journey involved in the science of immortality: a challenging, involving read for any serious new age library."