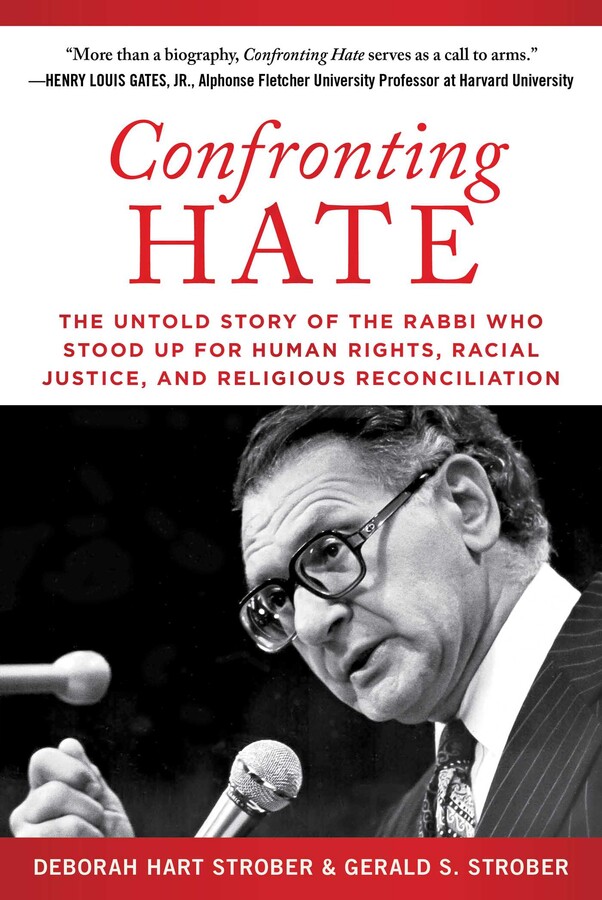 The Untold Story of the Rabbi Who Stood Up for Human Rights, Racial Justice, and Religious Reconciliation

In this biography, Gerald and Deborah Strober draw from original source materials and numerous interviews to detail the life and career of the esteemed Rabbi Marc Tanenbaum, a seminal 20th century figure in interfaith relations in the US and around the world.

From his position as Director of Interreligious Affairs at the American Jewish Committee, Rabbi Tanenbaum was deeply involved in the historic Vatican II Council, which promulgated a landmark encyclical on Catholic-Jewish relations. Rabbi Tanenbaum also was one of the few Jewish leaders who worked closely with Reverend Billy Graham and other evangelicals. He worked tirelessly as a civil rights activist and was active in the cause of Soviet Jewry, as well.

Confronting Hate details this esteemed career and his interactions with the likes of television legends Norman Lear, Don Hewitt, and Franco Zeffirelli; Jesse Jackson; Martin Luther King, Jr.; and several US presidents, from Dwight D. Eisenhower to George H.W. Bush. This book leaves no stone unturned in covering the public and private aspects of the life of “the human rights rabbi.”

The authors bring to light the immense international influence that Rabbi Tanenbaum has even today, more than twenty-five years after his passing.

Deborah Hart Strober is a professional writer who served as a cultural columnist and general assignment reporter with the New York Jewish Week. She is the coauthor with her husband Gerald Strober of eleven published books.

Gerald S. Strober is the author of American Jews: Community in Crisis and the coauthor of twelve nonfiction books. Strober has an M.A. in Jewish Studies from New York University and served on the national staff of the American Jewish Committee.

"In this compelling and important volume, Deborah Hart Strober and Gerald S. Strober meticulously unfold the fascinating life and groundbreaking career of Rabbi Marc Tanenbaum, an iconic religious figure in the 20th century who played key roles in Jewish-Christian reconciliation, the civil rights struggle, the liberation of Soviet Jews, and political opposition to racial or ethnic injustice world-wide. More than a biography, Confronting Hate serves as a call to arms, inspiring and informing those who seek social justice in today’s troubled world."
--Henry Louis Gates, Jr., Alphonse Fletcher University Professor at Harvard University
"From his support of my parents and the Civil Rights Movement, to other causes of righteousness, the life examples of Rabbi Marc Tanenbaum as depicted in Confronting Hate, reflect a global leader concerned about justice for humankind and one who understood the significance of reconciliation in the pursuit of justice.  His life exemplars in working together across different races, nationalities and religions to fight injustice reflect an understanding of what my father stated in his letter to religious leaders from the Birmingham jail: “Injustice anywhere is a threat to justice everywhere.  We are caught in an inescapable network of mutuality, tied in a single garment of destiny.  Whatever affects one directly, affects all indirectly.”  In light of the divisiveness and inhumanity that is reported daily, it is clear that mankind is still grappling with this truth.  Struggle is a never-ending process, but the life examples in this book are a tangible resource to help leaders in this generation and in generations to come in their pursuit of justice and freedom."
--Rev. Dr. Bernice A. King, CEO, The King Center
“This book tells a remarkable historical story that everyone should know. Rabbi Marc Tanenbaum is a man to be remembered, and this is a book that will haunt your memory, long after you have turned its pages.”
--Rabbi Irving (Yitz) Greenberg, President Emeritus, CLAL: the National Jewish Center for Learning and Leadership; and author of For the Sake of Heaven and Earth: the New Encounter of Judaism and Christianity

"There is no one in my memory quite like Rabbi Marc Tanenbaum.  He was a man of peace and fellowship with the fiery heart of a warrior who would fight to the death for his beliefs.  I could express this quality a thousand ways, but they would all add up to the unique man and giant among us who was Marc Tanenbaum.  Hate had no more fierce an enemy than Marc."
--Norman Lear

"Confronting Hate vividly conveys the extraordinary impact of Marc Tanenbaum’s distinguished and influential career as well as his larger-than-life persona. In capturing Tanenbaum’s groundbreaking, pioneering role in the field of interfaith relations, as well as his immense diplomatic and coalition building skills, Deborah and Gerald Strober illuminate the traits that drove his achievements in seminal events of American and international history in the second half of the 20th century."
--Rabbi David Saperstein, former U.S. Ambassador-at-Large for International Religious Freedom and Director Emeritus, Religious Action Center of Reform Judaism

"Marc Tanenbaum shared his wisdom and his warmth while he lived. He spoke with a voice that allowed us to be inspired by his Journey with us. This eloquent and candid biography captures the man, his work, and his humanity."
--Liv Ullmann

“As this book amply documents, my friend, Marc, stood tall as a man of faith, peace and compassion who envisioned and labored for a better world through inter-religious cooperation. He was a blessing to his family, friends and the Jewish people."
--Rabbi Arthur Schneier
"Though we have come to take for granted the healing of the Christian-Jewish wound, this compelling and inspiring biography of an American Jewish hero reminds us of how hard-won that achievement has been. As we face growing challenges to Jewish well-being in the 21st century, one sorely misses the wisdom, compassion and quiet determination of Rabbi Marc Tanenbaum."
--Yossi Klein Halevi, senior fellow, Shalom Hartman Institute, Jerusalem

"When it comes to chronicling the life of a rabbi whose public life epitomized tikkun olam, this book hits the mark." --Hadassah Magazine

The Untold Story of the Rabbi Who Stood Up for Human Rights, Racial Justice, and Religious Reconciliation