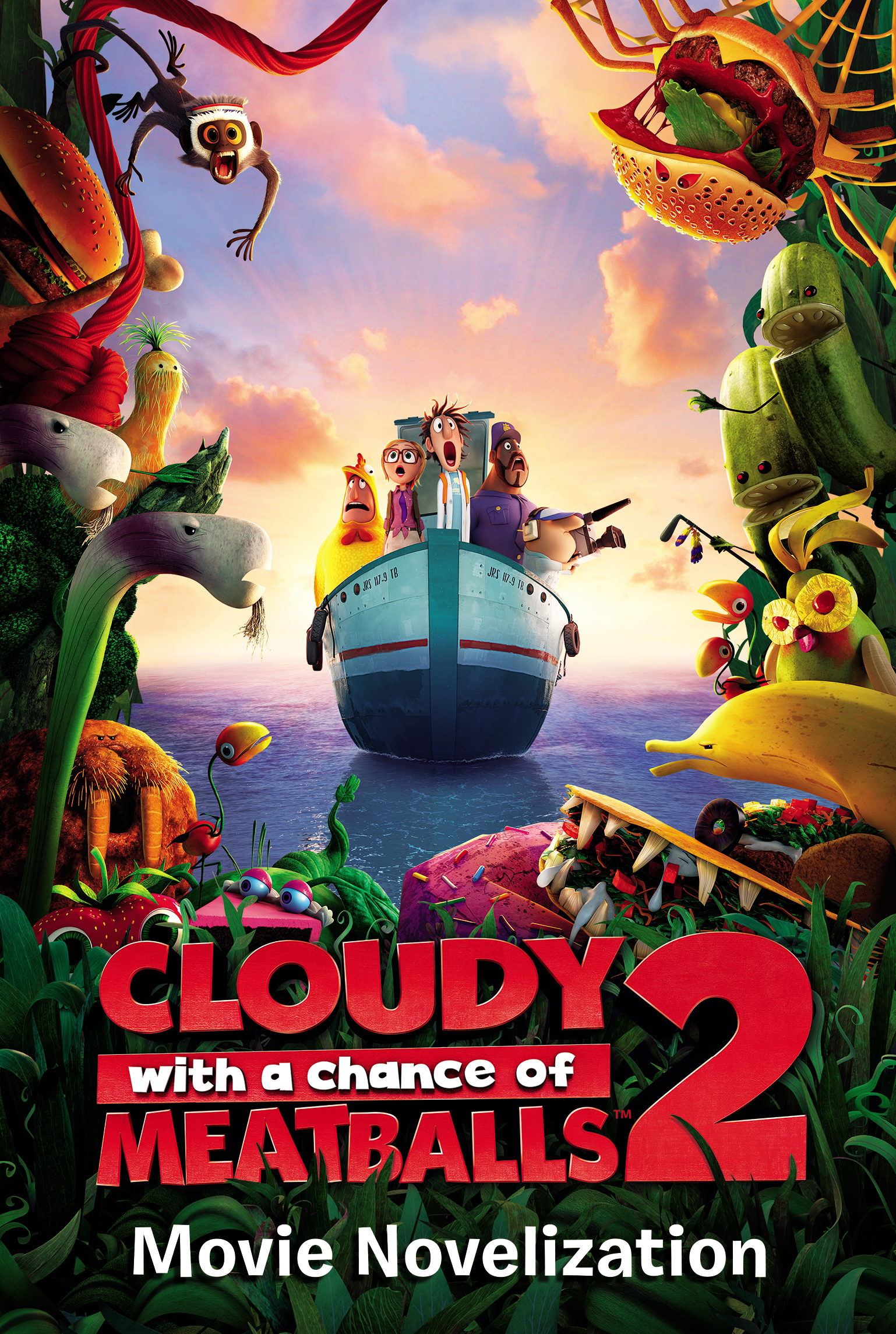 Cloudy with a Chance of Meatballs 2 Movie Novelization

Part of Cloudy with a Chance of Meatballs Movie
Adapted by Stacia Deutsch
Trade Paperback
eBook
LIST PRICE $5.99
PRICE MAY VARY BY RETAILER

The much-anticipated sequel to Cloudy with a Chance of Meatballs hits theaters on September 27, 2013!

Experience the foodalicious fun of Cloudy with a Chance of Meatballs 2 in this riveting retelling. Comes with eight pages of images from the movie!

Everyone in Swallow Falls is celebrating Flint Lockwood’s defeat of his food-creating machine, the FLDSMDFR. Then world-famous inventor and Flint’s idol, Chester V, arrives and offers to have his Thinkquanauts clean up the tiny island. Flint is thrilled—but cleaning up Swallow Falls is proving very complicated. It seems that the FLDSMDFR is still creating all sorts of living food animals that are attacking Chester V’s cleanup crew.

Chester V needs Flint’s help destroying the FLDSMDFR once and for all so Flint and his friends can return to Swallow Falls. But things on the island may not be what they seem, and Flint may have to reconsider his choice of role models…

This retelling of the Cloudy with a Chance of Meatballs 2 movie includes eight pages of images from the film.

Cloudy With A Chance Of Meatballs 2 Movie Noveliza


Flint Lockwood was reminiscing about his childhood.

“My whole life I’ve always wanted to be a great inventor. Just like my hero, Chester V!”

Flint remembered how, as a young boy, he would sit in front of his TV set eagerly waiting for his favorite show to come on. And, then, finally, after what seemed like an eternity, there he was—the world’s greatest inventor, Chester V!

“Welcome back, Science Friends!” Chester V would say. “Here at Live Corp we are inventing the future, but every dream has a beginning. I still remember my first invention. The humble food bar.” Chester held up a photo of himself as a child with his first invention . . . a food bar machine.

“And now look at us,” Chester continued. “Still making food bars, still making people happy after all these years. Now kids, you’ll almost certainly never be me, but remember, there’s no such thing as small science . . . only small scientists! Can your idea change the world?”

Flint smiled at the memory as he sat by his computer in his lab. “My dream was to make the world a better place. So I invented this . . .” Flint typed on his keyboard and then pointed at the opening image in the video. “A machine that could turn water into food.”

On the screen the machine gurgled, “Cheeseburger!”

“It’s called the Flint Lockwood Diatonic Super Mutating Dynamic Food Replicator, or for short, the FLDSMDFR.” The video showed Flint pouring water into the top of his creation. A cheeseburger plopped out from the bottom.

Flint scrolled though footage of the day that it rained hamburgers. When ice-cream snow closed schools. The time a candy rainbow arched across the sky.

“Because of my invention’s food weather, people in my town liked me—for the first time in my life!” One of his favorite memories was when he and Sam Sparks, a local weather girl, bounced up and down inside a Jell-O mold. “My machine made everybody happy,” Flint said.

He zoomed through the footage, pausing on the night that a gigantic rib-eye steak nearly squashed his father. “Well, almost everybody,” Flint admitted.

The video revealed how huge food began crashing down from the sky, crushing famous and important historical monuments.

“Turns out bigger isn’t always better,” Flint admitted as images of mutant gummi bears and vicious roaster chickens flickered on the screen. “When the storm spread all over the world, and the FLDSMDFR started making dangerous living food, I finally had to face the truth.” Flint cringed. His machine had gotten out of control. “It was time to put an end to my FLDSMDFR.”

The final shot was of Flint sealing the angry FLDSMDFR with another of his inventions; a can of Spray-On Shoes.

Flint pressed a button on the remote and the TV screen went black. “And that is how we saved the town that I almost destroyed.”

Flint shook his head to clear the bad FLDSMDFR memories. “Oh yeah.” He smiled. “The point is, by blowing up my greatest invention, I made something even better . . . friends!” Flint looked around happily. He was surrounded by his family, friends, and residents of Swallow Falls.

“You’ve made me very proud, son.” Flint’s father, Tim, put his arms around Flint for a bone-crushing hug.

“Sam Sparks,” Flint said. “In the eight minutes since we saved the world, I’ve had time to reflect, and I think that you and I should have a place together.”

Sam’s eyes grew huge as if she couldn’t believe what she was hearing. “A place . . . ,” she breathed.

“A place where we work,” Flint told her.

“You think we . . . work? Together?” Sam asked hesitantly, her eyes glowing with excitement.

Sam replied with a dreamy grin. “I do.”

He grabbed a piece of paper and began to draw with crayons. “We could build a lab!”

“What shall we call it?” Flint asked.

“Oooh, Sparkswood.” Flint made the same jazz hands. He wrote “Sparkswood” on the paper.

Earl leaned in. “Sparkswood is gonna need some security!” He grabbed the crayon and added himself to the drawing.

Brent drew on the paper next. “And I can be your mascot!” He flapped a roasted chicken wing.

“And I can be your dad.” Tim put himself in the corner, then passed the drawing to Manny.

“There are many ways in which I can help,” Manny said, adding his own quick sketch.

“Oh! Can’t forget you, lab partner!” Flint reached behind him to pick up Steve, his monkey assistant.

“Steve!” Steve said. He spoke through Flint’s thought translator invention. The monkey made a mark on the Sparkswood drawing before hopping away.

“This,” Flint waved the drawing, “could be our future!”

Sam leaned in to give Flint a kiss, but the kiss was interrupted . . .

Cloudy with a Chance of Meatballs 2 Movie Novelization

Part of Cloudy with a Chance of Meatballs Movie
Adapted by Stacia Deutsch
Trade Paperback
eBook
LIST PRICE $5.99
PRICE MAY VARY BY RETAILER

More books in this series: Cloudy with a Chance of Meatballs Movie