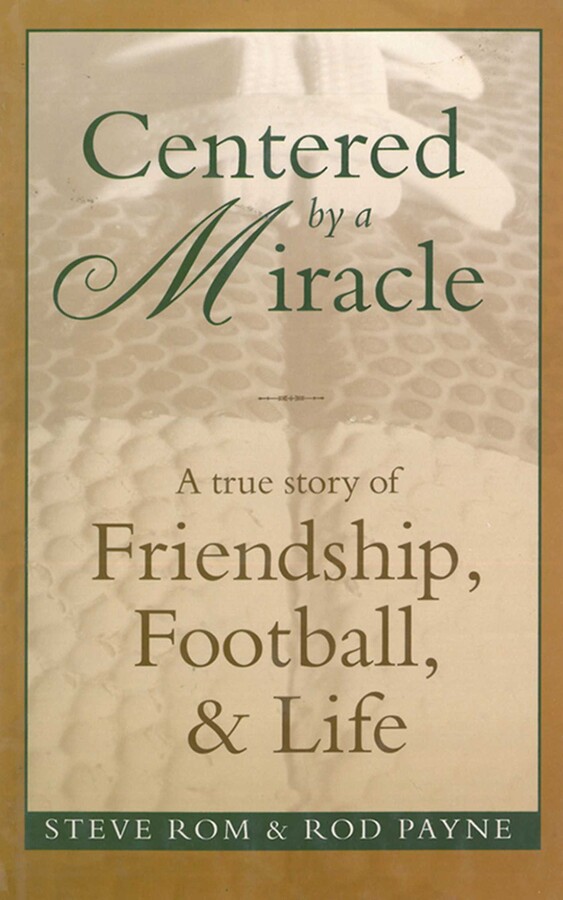 Centered By A Miracle: A True Story of Friendship, Football and Life

Miracles can happen to anyone. Steve Rom, a sportswriter at the Ann Arbor News, never thought his friendship with a recently retired Super Bowl champion would last. Rod Payne, a member of the 2000 world champion Baltimore Ravens, and a former All-America center at the University of Michigan, never thought the camaraderie he shared with his teammates in the NFL could be found with a rookie reporter. But when the two met by chance on Michigan’s campus early in the summer of 2001, they discovered they had a lot in common. Each was an only child raised by a working mother. Both felt a loss growing up without a father around. Despite pressure from their peers (including Rod’s former teammates and Steve’s fellow writers) to end their friendshipathletes aren’t supposed to get along with reporters, after alltheir bond developed quickly. When Steve took a short vacation to his native Los Angeles, three days of severe flu-like symptoms landed him in the hospital, where he received the most devastating news of his life. He was told he had leukemia. Steve and Rod’s friendship was about to change forever.

Steve Rom is a two-time cancer survivor and a member of the national speaking board for the City of Hope National Medical Center. He’s received eight awards for newspaper writing in the categories of feature, sports, and business (Associated Press Managing Editors of Arizona, Arizona Press Club) and has contributed to several newspapers around the country, including the Los Angeles Times, Seattle Post-Intelligencer, Minneapolis Star-Tribune, and Baltimore Sun. A native of Los Angeles, Steve has a bachelor’s degree in economics from the University of Michigan in Ann Arbor. He resides in Boca Raton, Florida.

Rod Payne first attracted national attention while playing center for the Michigan football program from 1992–1996. His teammates voted him most valuable player following his senior season, a campaign in which he also served as co-captain and earned All-America honors. He played three years with the Cincinnati Bengals and completed his four-year NFL career with the 2000 Super Bowl–champion Baltimore Ravens. A native of Miami, Rod is a former board member of the Michigan Letterwinners M Club Alumni Association and speaks regularly for the Fellowship of Christian Athletes. He coaches the football and wrestling teams at Westminster Academy in Fort Lauderdale, Florida. He lives in Boca Raton with his wife Carie and their child.

Centered By A Miracle: A True Story of Friendship, Football and Life