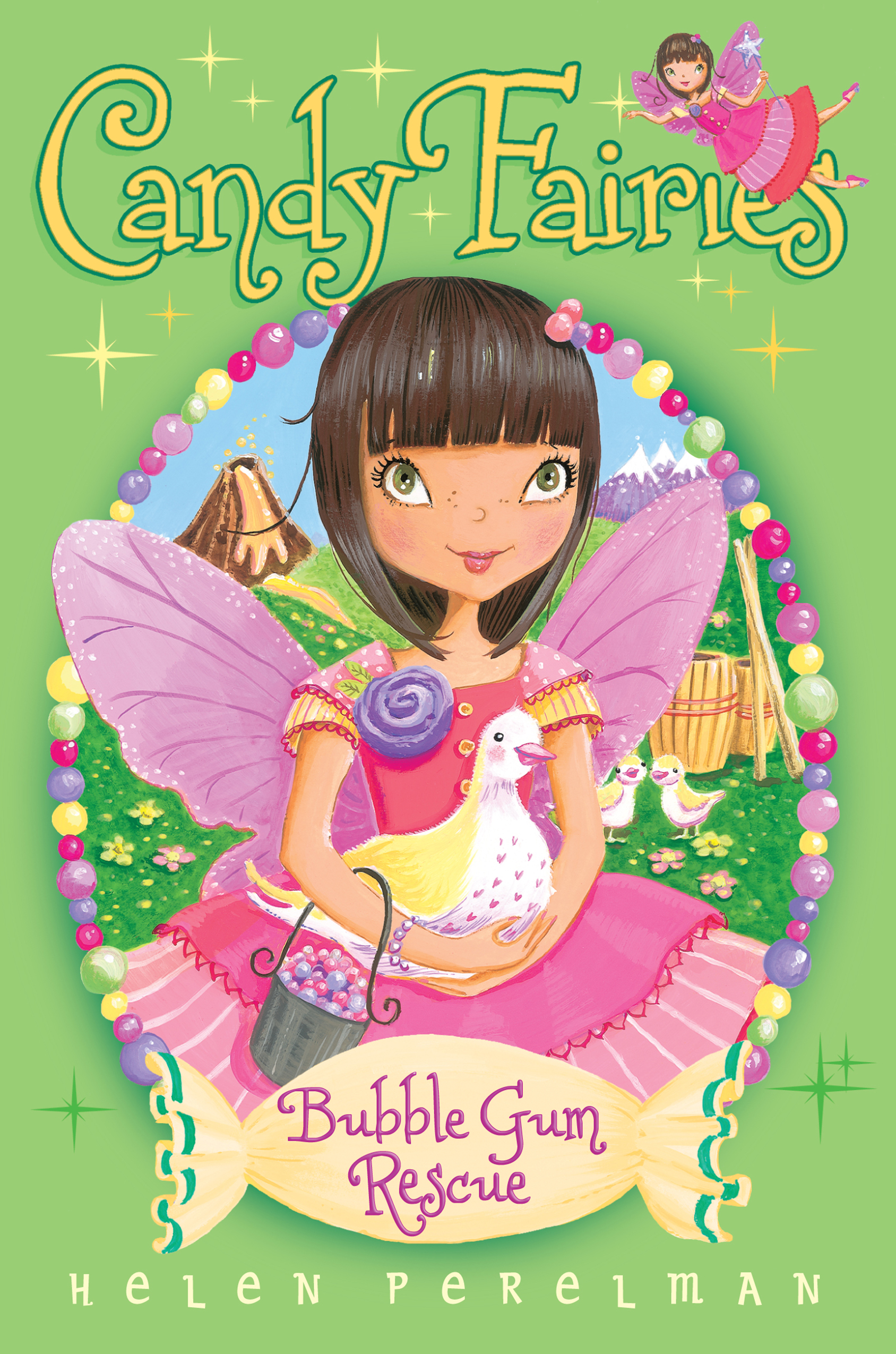 When gooey butterscotch endangers the inhabitants of Sugar Valley, it’s up to the Candy Fairies to come up with a sweet solution!

While putting the finishing touches on her special caramel chocolate candies, Melli finds a small bird, his feathers coated in sticky butterscotch syrup. She learns from Cocoa that there’s a deep crack in the butterscotch volcano in the Caramel Hills, and gooey butterscotch is spilling everywhere, trapping small animals and endangering the sweet environment.

How will the Candy Fairies protect the animals and their yummy homes from this candy catastrophe? By using pink, chewy bubble gum to plug up the crack and save the day, of course! The entire Candy Kingdom discovers that working together always makes life sweeter...and safer.


Early in the morning, Melli the Caramel Fairy flew to the top of Caramel Hills. She was checking on the caramel chocolate rolls she had made with her Chocolate Fairy friend Cocoa. Melli smiled at their newest creation drying in the cool shade of a caramel tree. Yesterday the two fairies had worked hard rolling small logs of caramel and then dipping them in chocolate. The final touch was a drizzle of butterscotch on top. Melli couldn’t wait to taste one!

A caramel turtle jutted his head out of his shell and smelled the fresh candy. Melli laughed. “You were hiding over by that log,” she said to the turtle. She kneeled down next to him. “Did you think you’d snatch a candy without my noticing?”

The turtle quickly slipped his head back into his shell. Still as a rock, he waited to see what the Caramel Fairy would do.

Melli placed one of the candies in front of him. “Of course you may have one,” she said sweetly. “There’s enough to share.”

The turtle stuck his head out again and gobbled it up.

The turtle nodded, and Melli smiled. “Cocoa and I are going to bring these to Sun Dip this evening,” she said.

Sun Dip was the time at the end of the day when the sun set behind the Frosted Mountains and the Candy Fairies relaxed. Melli loved visiting with her friends and catching up on everyone’s activities. And today she and Cocoa would bring their new candy. She hoped her friends would enjoy the sweet treat.

Just as Melli was putting the candies in her basket, she heard a squeal. It sounded like an animal in trouble. She put the basket down and walked toward the sound.

“Hot caramel!” Melli cried as she peered around one of the caramel trees.

Lying on the ground was a small caramella bird. He was trying to flap his wings to fly, but they were barely moving. Melli leaned in closer and noticed that the bird’s feathers were wet and stuck together.

Melli reached out to the bird. “You poor thing,” she whispered. She tried to calm the little one by talking to him. Caramella birds lived in the valley of Caramel Hills and had bright yellow wing feathers. They lived off the seeds of the caramel trees and filled the hills with their soft chirps.

“Where have you been playing?” Melli asked sweetly. She carefully picked up the bird and gently stroked his head. Immediately she realized that his feathers were covered in thick butterscotch. “How did you get coated in this syrup?” she asked. “No wonder you can’t move or fly.”

The bird chirped loudly. It was shaking in her hands.

“Butterscotch is not the best thing for feathers,” Melli said, smiling at the tiny caramella. “Don’t worry, sweetie,” she added softly. “Let’s give you a good bath and get this mess off your wings. I know all about sticky caramel.” She patted the bird’s head gently. “I will get you cleaned up in no time. Let’s go to the water well and rinse you off.”

Melli held on to the bird and flew to the edge of Caramel Hills. The tiny creature seemed to relax in Melli’s hands, but his heart was still pounding. At the well Melli began to wash the butterscotch off the bird’s wings. She knew she’d have to spend some time scrubbing. She had gotten caramel on her clothes before, and it often took a while to get all the goo off.

After a few rinses Melli began to see his brightly colored feathers.

“There, that does it,” she said, feeling satisfied. She stood back and looked at the little bird. “You do have gorgeous yellow wings!”

The bird shook the water off his wings. He was happy to be able to move them freely. He bowed his head to Melli, thanking her for helping him.

“You should be able to fly now,” Melli said. “Be careful, and stay away from the sticky stuff!”

“Hi, Melli!” Cocoa appeared next to her. “What are you doing here?”

“Cocoa,” Melli gasped. “You scared me! I didn’t see you there.” She pointed to the caramella bird. “Look who I found. He was covered in butterscotch, and his wings were stuck together. I just gave him a bath with the fresh well water.”

Cocoa’s wings fluttered. “Oh, bittersweet chocolate,” she said sadly. “This is worse than I thought.”

“What are you talking about?” Melli asked. “He’s all clean now. He’ll be able to fly.”

“It’s not only this bird I am worried about,” Cocoa said. “I heard from a sugar fly that there was a butterscotch syrup spill on the eastern side of Butterscotch Volcano. That must be where this one got syrup on his wings. All the caramella birds are in danger!”

“Oh no,” Melli said. “So many caramella birds live over there. What else did the sugar fly tell you?”

“That was all,” Cocoa replied.

Sugar flies passed information around Sugar Valley. If a fairy wanted to get the word out about something important, the sugar flies were the ones to spread the news.

“Let’s go now,” Melli said urgently. “If Butterscotch Volcano erupts, there’ll be a large spill in the hills.” She looked down at the bird. “Is that what happened to you? Will you take us to where you got butterscotch on your wings?”

The bird took flight, and Melli and Cocoa trailed after him. His yellow feathers gleamed in the sunlight. Melli beat her wings faster. She was very concerned about what kind of sticky mess they were going to find.