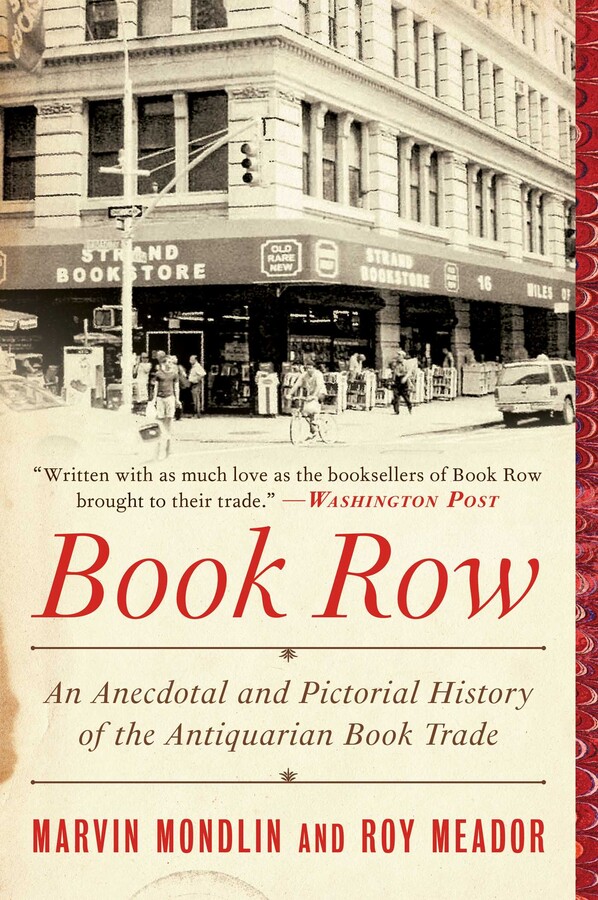 By Marvin Mondlin and Roy Meador
LIST PRICE $18.99
PRICE MAY VARY BY RETAILER

New York City has eight million stories, and this one unfolds just south of Fourteenth Street in Manhattan, on the seven blocks of Fourth Avenue bracketed by Union Square and Astor Place. There, for nearly eight decades from the 1890s to the 1960s, thrived the New York Booksellers’ Row, or Book Row.

This richly anecdotal memoir features historical photographs and the rags-to-riches tale of the Strand, which began its life as a book stall on Eighth Street and today houses 2.5 million volumes (or sixteen miles of books) in twelve miles of space. It’s a story cast with characters as legendary and colorful as the horse-betting, poker-playing, go-getter of a book dealer George D. Smith; the irascible Russian-born book hunter Peter Stammer; the visionary Theodore C. Schulte; Lou Cohen, founder of the still-surviving Argosy Book Store; and gentleman bookseller George Rubinowitz and his formidably shrewd wife, Jenny.

Book Row remembers places that all lovers of books should never forget, like Biblo & Tamen, the shop that defied book-banning laws; the Green Book Shop, favored by John Dickson Carr; Ellenor Lowenstein’s world-renowned gastronomical Corner Book Shop (which was not on a corner); and the Abbey Bookshop, the last of the Fourth Avenue bookstores to close its doors.

Rising rents, street crime, urban redevelopment, and television are many of the reasons for the demise of Book Row, but in this volume, based on interviews with dozens of the people who bought, sold, collected, and breathed in its rare, bibliodiferous air, it lives again.

“Between 1890 and the 1960s, a bustling trade in used and rare books flourished in New York City along Fourth Avenue, between Union Square and Astor Place. Although the stores that once prospered on this little stretch of street have long since closed, the memories of the halcyon days of the bookselling trade in the city still live in the minds of former customers and store employees. Drawing on interviews and on seminal articles published in the early- and mid-20th century, Mondlin (estate buyer at the Strand) and book collector Meador vividly re-create the passion, wonder and adventure of the book trade as it developed along Book Row. . . . Mondlin and Meador's affectionate paean to the denizens and dealers of Book Row brings to life the glory days of one of New York City's greatest bygone treasures.”
—Publishers Weekly

“For about 100 years, secondhand bookstores clustered on Fourth Avenue in New York City between Union Square and Astor Place. Their names read like an incantation: Samuel Weiser, Dauber & Pine, Biblio & Tannen, the Abbey, the Raven, the Corner. They are mostly gone now, save the Strand, whose mighty 16 miles of books are still funky despite a whole new audience online. Mondlin, who is estate buyer for the Strand, and Meador, a collector, have produced a sprawling and remarkably engaging omnium gatherum of names, personalities, and store lore. Some of the people they profile loved books; some of them loved the hunt; some of them mostly loved the mise-en-scene. . . . For anyone interested in the antiquarian book world, this will be a very special volume.”  —Booklist

“‘America's unofficial capital for secondhand books,’ . . . Book Row was the literary Alice's Restaurant: You could get anything you wanted. . . . [Book Row] is written with as much love as the booksellers of Book Row brought to their trade, and it certainly will bring back happy memories to anyone lucky enough to have prowled Book Row's endless shelves.” —Washington Post

"Although barely a shadow remains, Book Row has left behind a colorful history almost as cluttered as one of its stores. According to Marvin Mondlin, a veteran of more than 50 years in the trade, and Roy Meador, a book collector and writer, it is a history of the strange business practices of stranger personalities." —New York Times

By Marvin Mondlin and Roy Meador
LIST PRICE $18.99
PRICE MAY VARY BY RETAILER