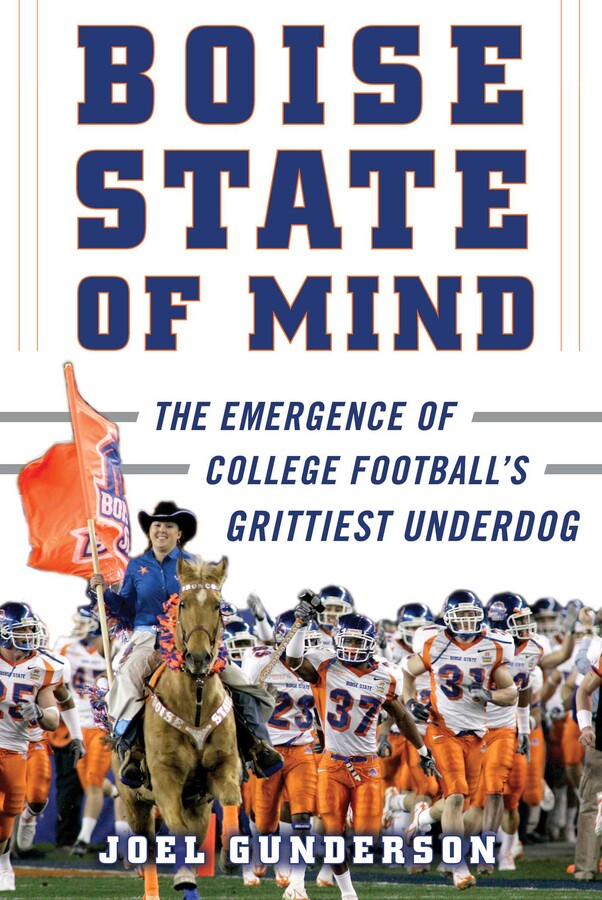 After decades of under-the-radar success, the Boise State Broncos became a household name during the 2006-07 NCAA football season. That was when the 12–0 Broncos were set to face the 11–2 Oklahoma Sooners in the Fiesta Bowl. A David vs. Goliath event, everyone expected the Sooners, who played in the highly competitive Big 12 conference and had dominated since coach Bob Stoops took over in 1999, to beat the no-names from the Western Athletic Conference. The match-up would end up becoming one of the greatest college football games ever played, with Boise State beating Oklahoma, 43–42, on a trick-play two-point conversion to win in overtime.

But where did it all start? How did a school in Idaho become one of the most successful and polarizing schools in the country? In Boise State, writer Joel Gunderson tells the story of how the school went from a junior college to Division I, climbing the ranks and building a program that has since beaten such college football powerhouses as Oregon, Georgia, Virginia Tech, and Oklahoma, and has the highest winning percentage in the country since 2000.

With in-depth interviews with current and former players, coaches, and administration, Gunderson offers an entertaining story of the growth of a program that rose from anonymity to becoming arguably the most successful underdog in the country.

While the city of Boise in Idaho has a population of approximately 223,000 people, the state, in general, is not a sports powerhouse. The closest NFL team is the Seattle Seahawks, who are a 7.5-hour drive away. There are currently only six players in the NFL that were born in Idaho. So how did Boise State, known mostly for its blue turf, become known for football excellence?

This is more than a Cinderella story. It’s about how they arrived, how they conquered, and how they’ve maintained in the cut-throat business that is college football.

&lt;div&gt;&lt;b&gt;Joel Gunderson&lt;/b&gt; is a freelance writer whose work has appeared on NBC Sports Northwest, the Cauldron at &lt;i&lt;Sports Illustrated&lt;/i&gt;, and the Pac-12 Network. He is a former finalist for the ONPA Sports Feature of the Year Award. Joel currently lives in Portland, Oregon, with his wife and three kids.&lt;/div&gt;

"How do you build an elite college football program? Joel Gunderson digs deep to answer that question in Boise State of Mind. Richly written and deeply reported, this is a must-read for every college football fan. Heck, they may just make a movie out of this." —Lars Anderson, New York Times bestselling author

"Boise State football sprang upon the national consciousness with its breathtaking victory over Oklahoma in the 2007 Fiesta Bowl. Joel Gunderson covers that defining moment in depth in Boise State of Mind. But he also takes us back to the beginnings, when Boise Junior College had a program that was mostly irrelevant, and delusions of grandeur at the FBS level weren't even possible.Through the eras of such as Lyle Smith and Tony Knap and Jim Criner and Pokey Allen and Dan Hawkins to the recent years under Chris Petersen and Bryan Harsin, Gunderson details the guts and the glory of everything that is Big Blue." —Kerry Eggers, award-winning author and journalist for the Portland Tribune and author of Jail Blazers

"Joel Gunderson has written a captivating and definitive book about one of the most interesting underdog tales in the land." —Monte Burke, author of Saban: The Making of a Coach

"This is a must-read for any fan of college football wanting to know the inside story on how Boise State became the nation's most famous underdog." —B. J. Rains, Idaho Press